Hogan: I Thought Munguia Would Give Me A Rematch

NEW YORK – Dennis Hogan hoped Jaime Munguia would give him a rematch.

The Irish contender was certain he had earned that opportunity April 13, when Hogan gave the unbeaten Mexican the most difficult fight of his pro career. Munguia’s majority-decision win, no matter how controversial, made Hogan too much of a high-risk, low-reward proposition to seriously consider granting him a second shot at Munguia’s WBO junior middleweight title.

“The Mexicans are such passionate fighters, with such heart and determination,” Hogan told BoxingScene.com. “Going on that, and the legends of Mexican boxing, I thought he would give me that rematch, that he would wanna better himself, to be like Chavez Sr. and Barrera. But I think maybe it’s more about the money now. Maybe his team pulled him back from it. I don’t know. I did believe I would get [a rematch]. I didn’t get it.” 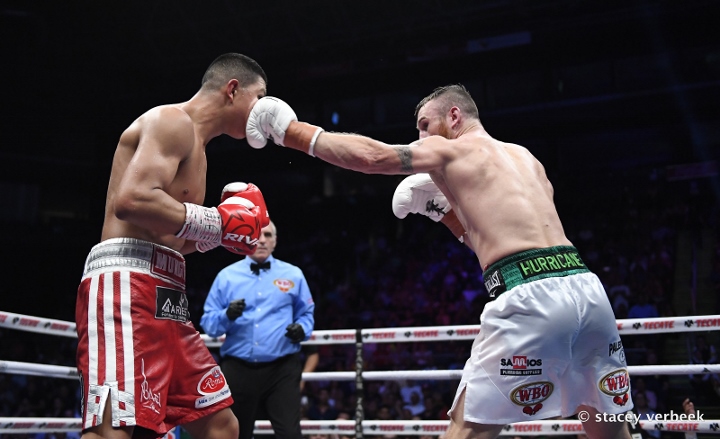 “I felt, myself, that I had won the fight [against Munguia],” Hogan said. “The commentator came in straight away and said, at the very least, it was 7-5 to me in terms of rounds. I feel like it was 8-4. Again, look, it’s like I said before, it’s all about the big picture. I love boxing. It’s what I do. It’s my passion. And I dream of being world champion. And I know I’ll be world champion. So, when I left there [Monterrey, Mexico], I just stayed emotionless. And I knew, ‘Keep working hard and I’ll get that world title.’ And lo and behold, this title [shot] presents itself straight away. So, I believe this is destiny.”

Showtime will televise Charlo-Hogan as the main event of a tripleheader from Barclays Center in Brooklyn. That three-bout broadcast will begin at 9 p.m. ET/6 p.m. PT.

As for Munguia, Hogan expects the determined, defensively flawed fighter to succeed as a middleweight.

“He’s a great fighter,” Hogan said. “He really is a good boxer. And I’m not giving myself ups for that, either. What I give myself ups for is the game plan to nullify that, and we did that. Everything we did, we did well. A good game plan can beat anybody. That’s what I fully believe. So, I do think he can go on to be good. I think another couple of years, he could be in the mix to beat [Canelo Alvarez]. It’s all about does he want to do it? Is he training hard enough for it? I believe he can achieve anything.”

When are the Charlos going to step it up? These guys are clowns and Al Haymon destroying thier careers. I still can't believe that Charlos are fighting Jamie Mungia's left overs. Smh.