High Hopes For Pacquiao Against Keith Thurman and Beyond

I have a lot of hopes for Manny Pacquiao.

I hope that, at 40 years old, he truly belongs in the ring with a prime thoroughbred like Keith Thurman even though I have serious doubts. They fight for Thurman’s WBA welterweight title on July 20 at the MGM Grand in Las Vegas.

I hope Pacquiao’s impressive victories over a faded Lucas Matthysse and a small, reluctant Adrien Broner in his last two fights mean more than I think they do.

I hope the popular notion that a 40-year-old can retain the physical tools of his or her youth – or at least enough of them – is accurate even though it’s counterintuitive.

I hope he throws enough punches to be competitive with Thurman even though my eyes – and the numbers – tell me that he isn’t nearly as active in the ring as he once was.

I hope he still has the legendary hand speed that allowed him to overwhelm so many of his opponents even though common sense suggests he must be at least a tick slower.

I hope he can still move his feet as quickly and efficiently as he once did even though his stated desire to have Thurman come to him during the fight tell me that even Pacquiao knows his legs aren’t what they used to be.

I hope he has retained his reflexes, which will be tested against an opponent as quick and athletic as Thurman, even though, again, I worry because of his age.

I hope Pacquiao performs more like Bernard Hopkins than Roy Jones Jr. at this stage of their careers.

I hope he really has looked terrific in training camp, as many zealous observers have publicly declared, even though appearances in the gym often mean little come fight time.

I hope Pacquiao has the punching power to keep Thurman honest, as trainer Freddie Roach suggested he has, even though one knockout (over Matthysse) over an entire a decade suggests otherwise.

I hope Roach’s confidence in his longtime protégé is genuine even though candid comments he made to Los Angeles Times columnist Dylan Hernandez – “They're all beatable on a good night for Manny, but you can't really count on having a good night every time at 40 years old,” he said – make me wonder.

I hope, as the Times put it, Pacqiuao doesn’t have “a false sense of security because of his religious convictions.” In my opinion, Pacquiao will face Thurman alone.

I hope Pacquiao truly has renewed focus on his training and inner peace because he has abandoned his vices – “womanizing, gambling, drunkenness,” he told the Times – as he claims. 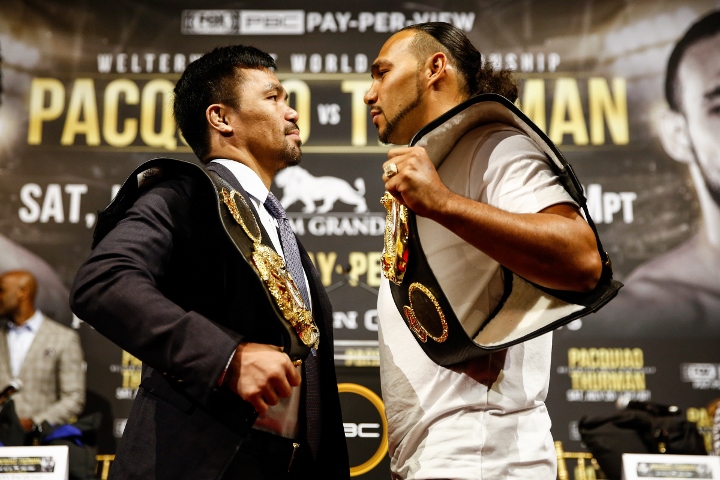 I hope Pacquiao doesn’t realize at the worst possible time – in the heat of the action – that he no longer can compete with the best welterweights even though I believe that’s a strong possibility.

I hope – and have faith – that the referee or Roach will stop the fight a second too soon rather than a second too late if things become hopeless for Pacquiao.

I hope Pacquiao and his team are careful about who they choose to fight next – Errol Spence? God forbid – if he’s able to get past Thurman.

I hope Pacquiao was telling the truth when he said, “I will stop right away,” when his body can no longer do what his brain tells it to do even though Roach told Hernandez, “It's a lot harder to walk away from the sport than people realize. I know this. I've been there.”

I hope Pacquiao’s team members are brutally honest with him – instead of telling him what they might think he wants to hear – when it’s clear that he doesn’t have it anymore.

I hope that whenever Pacquiao decides to call it quits that good health allows him to enjoy many years in his retirement from boxing.

I hope he now has earned – and retained – enough money that he doesn’t feel he has to continue fighting if things don’t go well against Thurman.

I hope one of the greatest fighters of his era doesn’t stay one fight too long and have done to him – by Thurman or anyone else – what he did to Oscar De La Hoya a decade ago.

I hope Pacquiao has enough knowledge of history to know that most once-great fighters go out like De La Hoya did and enough sense to avoid that fate if it doesn’t happen against Thurman.

Most of all at this moment, I hope Pacquiao doesn’t get seriously hurt on July 20.

No need to hope any longer. Manny made it happen.

Thurman's no "prime thoroughbred". Utterly ridiculous! What have you done for me lately, Keith? You can't really say WHAT he is because he's only had two fights in 30 months. You're only as good as your last fight and Lopez…

[QUOTE=Pennstate110;19887351]I hope you'll realize that all that reasoning you use to discredit pacquiao's career is not and will never be acknowledged by the boxing world. I hope you realize you still have a little bit of dribble from Floyd's j!zz…

[QUOTE=Oregonian;19884528]——- I hope some day you will acknowledge and write that Brandon Rios was a bum so was Broner so was Mathysse so was David Diaz so was Horn. I hope that you’ll write Cotto and Margarito were cheated st…

[QUOTE=Crying Brandon;19884815]Many including yours truly believed he would be the 1st to beat Adrien Broner via TKO/KO. He still has potential so hopefully he doesn't get injured or drinks booze.[/QUOTE] [QUOTE=MDPopescu;19884868]I didn't know he was drinking... (just checked the Net…

ADD COMMENT VIEW COMMENTS (40)
Advertisement
Top Headlines Gausha: I Lean More Towards Charlo Over Rosario, May The Best Man Win Pedraza vs. Molina - LIVE Results From The Bubble: Tucker, Goldston Win Cobia Breedy: This Is Bigger Than Me, Doing This For My People Back Home In Barbados Jaron Ennis: Becoming First To Stop Abreu Would Be A Big Statement Conwell vs. Toussaint Tops ShoBox Quadrupleheader, October 7 Memo Heredia Has High Hopes For Robeisy Ramirez Bob Arum: We Think Ajagba Can Be Among Top Heavyweights In The World Abreu: I Just Got Out Of Jail, How Can Ennis Put Any Fear Into Me? Ennis: Extra Weight Won’t Matter For Abreu; I'll Go In There & Get The Stoppage Pedraza: As I Keep Moving Forward, Fights Will Keep Getting Tougher And Tougher Alex Saucedo vs. Arnold Barboza Jr. To Co-Headline Lomachenko-Lopez On 10/17 Erickson Lubin: You Could See How Much I've Changed Since The Charlo Fight Jaron Ennis: I Might Have To Get Into A Mandatory Position To Get A Title Shot Ajagba: Time Away From Ring Was Frustrating, Hurts To Not Be Able To Do Something You Love Nyambayar: I Had A Sprained Ankle Against Gary Russell; I'd Love A Rematch Lubin: I'm Fresher, Hungrier Than Lara & Trout; Looking To Make Statement Against Gausha Pedraza: I Think Lomachenko Will Dominate Lopez, But He Can't Get Reckless Daily Bread Mailbag: Charlo Brothers, Ennis, Canelo, Spinks, More BoxingScene.com's Television Pick of The Week - September 19 McKenna: Beating Ohara Davies Will Be Highlight of My Career Joe Joyce: We'll See if Dubois Can Take My Heavy, Powerful Shots! Frank Warren: Whyte Received Shorter Medical Suspension Than Spelman? Francis Chua Aims To Fight, Looks To Kambosos, NG, MacKenzie Boxing Facing Financial Adjustments Johnny Nelson Confident Whyte Would Have Benefited With Tibbs in Corner Vijender Singh Hopes To Resume Career Before Year is Over Josh Taylor Must Remain Focused on Khongsong, Says Ben Davison Javier Molina: Pedraza Looked Good With LesPierre - I'm No LesPierre! Amir Khan Appointed as President of WBC Middle East Boxing Council Ajagba vs. Rice, Ramirez vs. Caraballo - Ready To Fight Jose Pedraza, Javier Molina - Set For Showdown in Las Vegas Pedraza-Molina ESPN+ Weigh-In Report From The Bubble Ennis vs. Abreu, Nyambayar vs. Breedy - Set For Bouts Erickson Lubin, Terrell Gausha - Ready For WBC Eliminator Haven Brady Jr. Inks Promotional With Top Rank Crawford vs. Brook Negotiations at Advanced Stage For November 14 Zhang Zhilei Inks Promotional Pact With Eddie Hearn Juan Carlos Abreu Comes In 3-Plus Pounds Overweight For Jaron Ennis Fight Rene Tellez-Giron Return Pushed Back Due To COVID-19 Terrell Gausha: I Was Nervous That I Wouldn't Get This Fight Again
Advertisement
Latest Boxing Videos 'The Journey - Charlo Doubleheader' 30 Minute Special Showtime Releases Trailer For Documentary 'Ringside' Charles Martin Reacts To Helenius Stopping Kownacki Robert Helenius Reacts To Shocking TKO of Kownacki Adam Kownacki Reacts To TKO Defeat To Helenius Joseph Parker Reflects on Fury-Wilder, Talks Return Mikey Garcia Reflects on Fury-Wilder, Talks Vargas Eddie Hearn Reflects on Fury Stopping Wilder, More Kenny Porter Reacts To Tyson Fury Stopping Wilder Jose Ramirez Reacts To Tyson Fury Stopping Wilder
Recent Top Stories Graveyard Shifts At Warehouse Motivated Molina To Turn Around Boxing Career Erickson Lubin vs. Terrell Gausha: The Play-In Derevyanchenko Vows: I'm Ready For Everything in Charlo Fight Remembering "The Showdown" – Still a Thrill After 39 Years
Advertisement
Latest Forum Threads
Advertisement
Advertisement
This website may contain adult language.
TM & © 2020 BoxingScene. All Rights Reserved.