Herring: To Overlook Anyone Can Have Me Losing My Title

Other than harmless social media banter, very little in the way of trash talk has come of this weekend’s junior lightweight title fight between Jamel Herring and Lamont Roach.

There does reside, however, lingering confusion as to why anyone would believe the defending titlist is focused on anything other than his next assignment.

“I respect the kid, can’t say anything negative about him or his family,” Herring (20-2, 10KOs) noted to BoxingScene.com of his unbeaten challenger. “But, I have seen little comments of him saying I need to be focused. Not sure where that’s coming from.

“I’ve been in the desert more than once (as a two-time Iraqi war veteran while proudly serving the U.S. Marine Corps). I have (head trainer Brian) Bomac (McIntyre), and (unbeaten three-division titlist Terence) ‘Bud’ Crawford in camp with me every day. I have no choice but to stay focused when Bud is there every day checking my weight and when we’re sparring.” 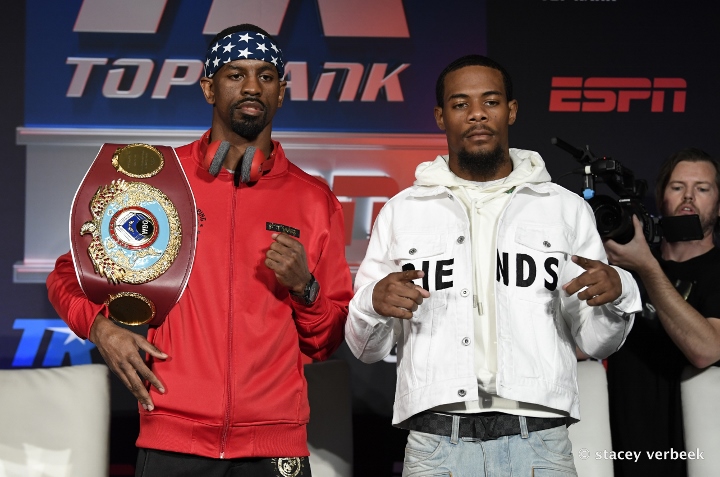 Herring joined McIntyre’s stable in early 2018, shortly after having served the first five years under the Premier Boxing Champions (PBC) banner where he trained among an all-star camp that included his 2012 Olympic teammate and former bantamweight beltholder Rau’Shee Warren and former four-division titlist Adrien Broner. The move to McIntyre’s team also led to his signing with Top Rank, which will promote his fifth straight bout with Saturday’s title defense versus Roach (19-0-1), live on ESPN+ from Chukchansi Park in Fresno, California. Herring has won four straight after having dropped two of his previous three, with his most recent win coming in a title-lifting effort over Japan’s Masayuki Ito this past May in Kissimmee, Florida.

Their ESPN-televised title fight saw Herring—a 34-year old southpaw from the Coram section of Long Island, New York who now lives in Cincinnati, Ohio—turn in a career-best performance, thoroughly outboxing Ito over 12 rounds in his first career title fight. The win came two days prior to Memorial Day, with the night complete with his fellow Marine brothers and sisters in the house to commemorate the event.

A similarly patriotic theme is carried in his first title defense, the bout preceding Veteran’s Day. The two dates assigned to his headlining acts are by design, a reward for the hard work he’s put in since joining Top Rank and ESPN. It will take a lot more than visions of what lies ahead to get him to distract him from what’s at stake this weekend.

“For Lamont to think I’m not focused—if they think I’m overlooking him, then let him believe that,” notes Herring, though hardly banking his opponent’s own focus being anywhere else but on fight night. “It took me forever to get this belt. To overlook anyone, can have me losing my title.

“I need this fight to make a huge statement. I will perform even more than ten times better than I did to win the title. Because that’s what it’s gonna take to defend it every time now that there’s a target on my back.”