Jamel Herring appears to be set for the most significant fight of his pro career.

The reigning WBO junior lightweight titlist is poised to next defend his belt versus Belfast’s Carl Frampton. BoxingScene.com has learned that the long-awaited matchup is being targeted to take place on the weekend preceding Martin Luther King Jr. Day, with the bout to air live on an ESPN platform from a location to be determined in the United Kingdom.

Stateside, the working date is January 16. However, BoxingScene.com has also learned of potential plans to stage the event to where it airs live in primetime for U.S. viewers, which would place the fight Sunday, January 17 locally in the U.K. The move would be similar to past efforts such as Ricky Hatton’s stoppage of Kostya Tszyu to win the 140-pound championship in June 2005 and Joe Calzaghe’s 12-round beatdown of Jeff Lacy in their March 2006, both of which took place in the wee hours of the morning in Manchester, England. 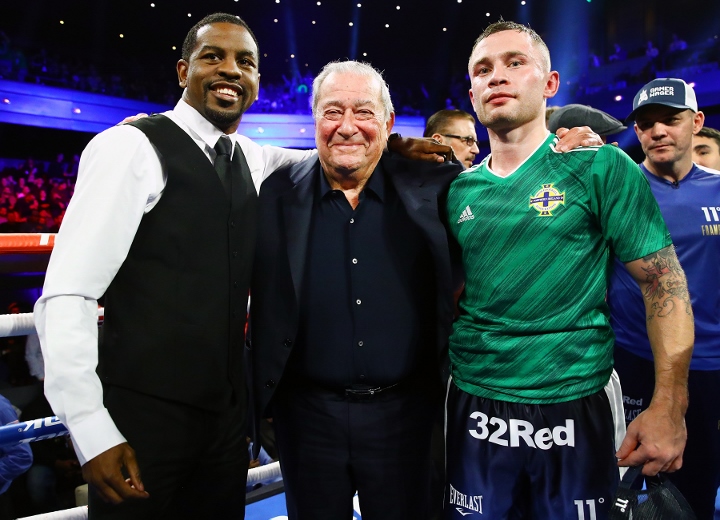 That part of the equation remains in discussion, as does the more traditional option of primetime in the U.K. and airing during Saturday afternoon stateside on an ESPN platform. Should the date hold, it will serve as among the first major title fights of 2021.

Herring (21-2, 10KOs) will attempt the third defense of the 130-pound title he claimed in a 12-round unanimous decision win over Japan’s Masayuki Ito last May at Osceola Heritage Park in Kissimmee, Florida. The 35-year old southpaw from the Coram, New York— now based out of Cincinnati—successfully defended his strap in a 12-round win over Lamont Roach Jr. last November and in an 8th round disqualification win over Puerto Rico’s Jonathan Oquendo this past September at MGM Grand Conference Center in Las Vegas.

The latter win left Herring with cuts over his right eye along with a scratched retina which affected his vision in a voluntary title defense littered with headbutts. The bout was twice postponed—both times due to Herring testing positive for COVID-19—before making its way to the schedule, all on the heels of his planned showdown with Frampton (29-2, 16KOs) getting postponed due to the ongoing coronavirus pandemic.

Herring and Frampton were due to face each other on June 13 in Frampton’s hometown of Belfast, only for the event to get shut down due to the severity of the global health crisis. Both were instead afforded optional fights in the interim, with Frampton earning a 7th round knockout of Darren Traynor—a late replacement for Armenia's Vahram Vardanyan, who was pulled due to travel visa issues—this past August in London.

Hopes of rescheduling for this fall in Las Vegas were hindered by Herring’s aforementioned injuries suffered in September. As previously reported by BoxingScene.com contributor Dan Rafael, a targeted December 19 date in Vegas became a non-starter due to the lack of a live telecast with ESPN immersed in college football coverage.

The winner will be mandated to next face unbeaten former featherweight titlist Shakur Stevenson (14-0, 8KOs), Such status previously served as a hindrance in allowing Herring-Frampton to move forward, as the WBO declared that a mandatory defense versus Stevenson needs to take place no later than January 2021.

That timeframe is clearly more flexible, as Stevenson will return to the ring in a stay-busy fight versus Toka Kahn-Clary on December 12 at MGM Grand Conference Center in Las Vegas.

Frampton has previously held major titles at 122- and 126-pounds. A win over Herring will make him the first-ever three-division titlist to come out of Belfast.

As for Herring, the road trip will mark his first fight back in the United Kingdom since his tour as team captain of the 2012 U.S. Olympic boxing team which competed in London.

Why is it that everything has to revolve around the Good Ole USofA? I'm sick to the back teeth of either staying up all night or getting up at stupid O'clock to appease the American market, just so they can…

[QUOTE=VashDBasher;20899119]I’m with you on that. I’ve been following Frampton for pretty much his whole pro career. I admire his fighting style and his mellow attitude. It’d be nice to see him pull this one off, which I think he will…

[QUOTE=RJJ-94-02=GOAT;20897078]Would love to see Carl pull it off, followed his career since his debut at the Olympia in 2009 I think. Shame there likely won’t be a live crowd though, would have been an amazing atmosphere if this was in…

Carl's drug dealing handlers will make sure they put enough cash up to tempt JH over allowing themselves to sport wash the misery they are causing every day. Frampton was a hero to so many now he is just an…

Would love to see Carl pull it off, followed his career since his debut at the Olympia in 2009 I think. Shame there likely won’t be a live crowd though, would have been an amazing atmosphere if this was in…