Herring Dedicates Win To U.S. Troops: I Couldn't Lose On Our Weekend

Fighting on the eve of the 244th birthday of the U.S. Marines Corps and two days prior to Veterans Day, there was no way that Jamel Herring was going to leave the ring without his junior lightweight title still intact.

Of course, that also meant surviving the scariest moment of Saturday’s title defense versus Lamont Roach Jr., who rocked Herring late in the 11th round of Saturday’s ESPN+ headliner at Chukchansi Park in Fresno, California. The moment was a major momentum shift, though not lasting long enough to change the outcome of the fight as Herring earned a unanimous decision.

“It was a good shot,” Herring (21-2, 10KOs) admitted to ESPN’s Crystina Poncher after making his first successful title defense. “I thought I had my hand up, but Lamont cuffed it behind it, and I can’t take nothing from it.

“It was a clean shot. I just had to toughen up and fight it out. I couldn’t go down. I’m a Marine.” 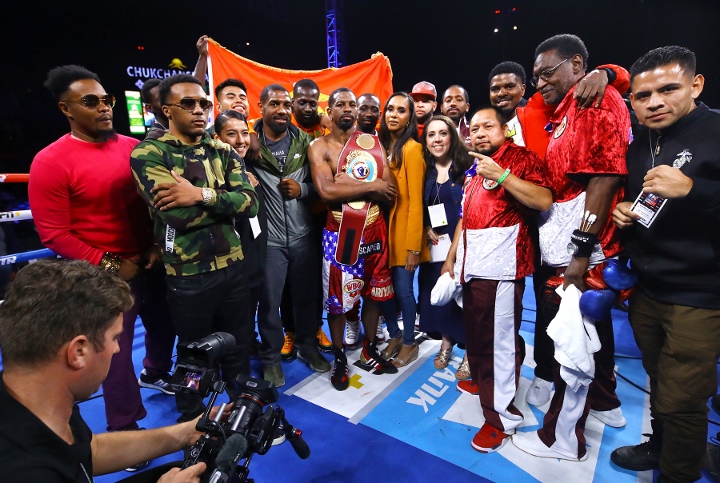 The pre-Veterans Day celebration came complete with the 34-year old southpaw and his team entering the ring while riding a military Humvee while being escorted by 265 of his closest friends in the U.S. Marines Corps.

Still, Roach Jr. (19-1-1, 7KOs) didn’t come just to play the part of willing opponent. The first time title challenger did his best to spoil the celebration, coming up just short as Herring enjoyed an early lead and fended off a scrappy finish from his determined challenger to salute his fellow men and women in uniform.

“I won {the title} on Memorial Day Weekend and I defended it on Veterans Day Weekend, so it definitely means a lot to all of our troops out there defending our country and still in harm’s way,” noted Herring. “This is for ya’ll.

“I couldn’t lose it on our weekend. It means a lot to still be a world champion.”

Herring continues to be unimpressive. I don't think he'd do too well against elites. He might be good enough to beat Cancio, Alvarado, and Machado but none of those fights would generate much interest. He's achieved beyond what was expected…

Was a good fight..too bad nobody paid attention to it because of that clown show. The garbage YouTube fight didn't even start until they were in round 11-12. I waited for the decision then caught the last 3 rounds of…