Here's Why Spence-Garcia Should Air On FOX, Not FOX PPV

The undefeated four-division champion understands that four inches, 15 to 20 pounds and 24-0 aren’t the only numerical challenges he’ll encounter Saturday night. Neither he nor Errol Spence Jr. has ever headlined a pay-per-view show, which makes $75 a daunting figure that’ll help shape the financial result of their event at AT&T Stadium in nearby Arlington.

“We’re excited and all that,” Garcia told a group of reporters after a press conference Wednesday at the Cowboys’ home stadium. “We’ve made it to this platform and this level. Other fights can’t be on pay-per-view because they just don’t bring the same attention. But this type of fight definitely needs to be on pay-per-view because it’s one of the fights that don’t come very often.”

This is an intriguing fight because it’ll match two of the sport’s top 10 boxers, pound-for-pound. Promoters and television executives obviously have offered lesser fights at this price point and made plenty of money.

That’s not necessarily the issue as it pertains to Spence-Garcia.

This is a bout boxing fans mostly want to see because the courageous Garcia has moved up two weight classes to oppose Spence – from the lightweight limit of 135 pounds to the welterweight maximum of 147.

It’s impossible to fault Garcia (39-0, 30 KOs) for “daring to be great,” as Spence repeatedly has stated. Spence (24-0, 21 KOs) has a lot less to gain, of course, because he is the bigger, stronger sizeable favorite.

As is the case with every pay-per-view boxing event, real fans of this sport will find a way to watch it. They’ll either pay $75 to their cable or satellite provider, travel to a bar, restaurant or movie theater, or steal a stream from Facebook, Twitter or wherever. 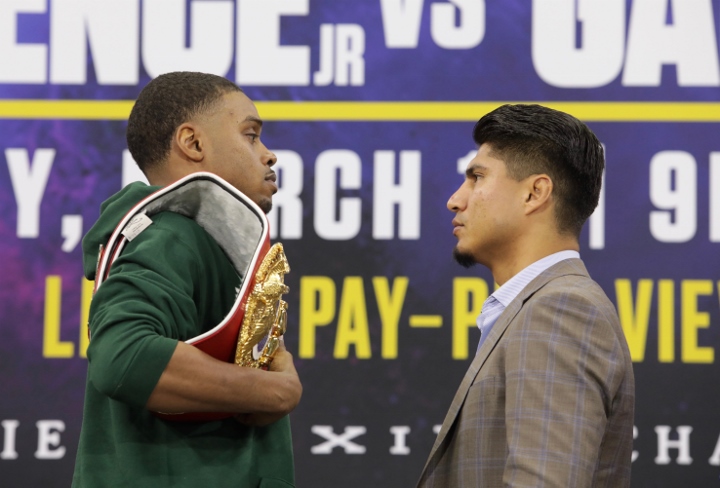 Whether Spence-Garcia produces somewhere between 250,000 and 350,000 buys, as most industry insiders have suggested, or better, Garcia and Spence will win. Their combined guarantees are believed to total somewhere between $15 million and $20 million.

Sluggish sales on pay-per-view still would render this a financial success for the most important people involved, the fighters.

Yet no matter how many people purchase Spence-Garcia, FOX and Al Haymon have passed on a potentially prolific opportunity to expose by far the best bout of FOX’s mid-November rollout to many more viewers than it’ll reach as a pay-per-view event.

The presumptive premise of the four-year deal FOX and Haymon struck late last summer was to help build boxing back into more than a niche sport by airing it regularly on network television. FOX is available in approximately 118 million American homes, more than competitors ESPN (87 million), Showtime (27 million) and DAZN (they refuse to tell us).

The network has committed considerable resources to this project, at least $50 million per year in licensing fees.

It has heavily promoted Spence-Garcia, too. Viewership figures for shoulder programming used to make even casual boxing fans aware of this fight have exceeded three million, though some of those viewers were repetitive, not unique.

Those Nielsen numbers for countdown and other Spence-Garcia programming are encouraging signs that pay-per-view sales just might exceed modest expectations.

For FOX and Haymon, however, this should’ve been the fight to showcase to the masses, not the smallest audience possible. Since “Premier Boxing Champions on FOX” launched December 22, they’ve given these main events – Jermall Charlo-Matt Korobov, Keith Thurman-Josesito Lopez, Leo Santa Cruz-Rafael Rivera and Shawn Porter-Yordenis Ugas.

Charlo-Korobov was much more competitive than many skeptics expected. Thurman-Lopez was an entertaining fight that over-delivered.

Santa Cruz-Rivera frankly had no business being a main event on FOX. Porter-Ugas was an extremely competitive fight fans and clearly judges think could’ve gone either way.

Spence-Garcia is a premium event, however one might feel about the legitimacy of Garcia’s chances against the unbeaten IBF welterweight champion from the Dallas suburb of DeSoto. Comparable bouts almost always wind up on pay-per-view.

That’s why it could’ve become a game-changer had FOX and Haymon been willing to air it live on the network.

That counterintuitive endeavor undoubtedly would’ve been expensive. It would’ve required figuring out a way to take money from the license fees for at least some of the seven remaining “Premier Boxing Champions on FOX” telecasts in 2019 to help pay Garcia and Spence the guarantees they sought for this fight.

Those guarantees would’ve been higher, too, because Spence and Garcia couldn’t have made more money on the back end if their fight aired on FOX. Such sacrifices still would’ve benefited the greater good of the cause.

When Ross Greenburg, then HBO Sports’ president, wanted to air a heavyweight championship match between champion Lennox Lewis and challenger Vitali Klitschko live on that network, an adjusted budget made it possible. That memorable battle drew a peak audience of 4.6 million on premium cable and kept at least one major fight off the pay-per-view platform that year.

Fifteen years after Lewis’ controversial stoppage of Klitschko, HBO got out of broadcasting boxing. That had nothing to do with televising Lewis-Klitschko live on HBO in June 2003.

For FOX to remain committed to boxing beyond this four-year contract, the network will need to build on the type of viewership it has attracted thus far. Porter-Ugas peaked at 2,197,000 viewers – slightly lower than the peak performances of Charlo-Korobov (2,421,000) and Thurman-Lopez (2,765,000).

Spence-Garcia then would become another excellent example of how boxing can be successful and sustainable on network television. If Thurman-Danny Garcia could peak at 5,100,000 viewers on CBS and Thurman-Porter could produce a peak audience of 3,940,000 million, why couldn’t Spence-Mikey Garcia fall at least somewhere between those numbers?

Spence, after all, helped lure a peak of 6,340,000 million viewers to watch his victory over Leonard Bundu in August 2016. The ratings success of their NBC bout obviously was aided by an unusually strong lead-in – the United States men’s basketball team’s gold-medal defeat of Serbia at the Summer Olympics in Rio de Janeiro.

Far fewer people than that will tune in to watch Spence square off against Garcia in a much more intriguing fight Saturday night.

“Look, I don’t have an exact figure right now,” Mikey Garcia said. “Yeah, look, when we go back to the earlier pay-per-view days, the record by, I think it was Tyson, was a million [buys]. And that was in the 90s, right? No other pay-per-view would ever get close to that. But all of a sudden, with the Mayweather fights and the Pacquiao fights, everybody tries to measure up to that and reach the million. And that’s the only successful pay-per-view. That’s not the way it works. If you get [200,000], 300,000 pay-per-views, back then it used to be a success. Now it seems like it wasn’t a success if someone gets 200,000.”

Imagine how successful Spence-Garcia might’ve become if FOX and Haymon had agreed to offer their fight, and this underexposed sport, to the biggest possible audience. Beyond making money, isn’t that the supposed point of their partnership?

This is not a PPV fight. I wouldn't pay a dime for this! Horrible undercard!

[QUOTE=b morph;19585534]This is so true. We have so much boxing accessible on TV now and on so many platforms. I can actually sit down with my old man and watch a fight. Because of me becoming a boxing fan, my…

I think this does better than Wilder vs Fury. 500K is possible. They should really promote it in the theaters more it is a great way to watch fights like this if you can't make it to a fight party.

They say Spence nor Garcia are PPV fighters. Well, they are now. Ppl said Mayweather wasn’t a PPV fighter too.

[QUOTE=MeanestNiceGuy;19584463]What remains constant in this sport is incessant butthurt and complaints....that's what needs to die, not the sport. The size of the fighters and their records is what's selling the fight....but the undercard isn't all that great. That much I'll…