The Heavyweight Chess Board

IT seems a week does not go by without a few more twists and turns in the heavyweight division.

Former heavyweight champion Anthony Joshua turned heel in an intriguing interview with Sky’s Anna Woolhouse and Tyson Fury announced he would fight Deontay Wilder in February next year even before Wilder has announced a date and venue for his next bout against Luis Ortiz later this year. And then there is the December 7 rematch between Joshua and Andy Ruiz which, we are told, is heading to Saudi Arabia but which, we are also told, might happen in the USA if Ruiz has his way.

We have digested all this in the space of a few days and a meaningful punch in the division hasn’t been thrown among the big boys this week.

Joshua’s Sky interview garnered worldwide headlines when he referred to former Olympic and world champion and heavyweight legend Lennox Lewis as a ‘clown’.

Lennox has never gone out of his way to shoot AJ down, but he has always answered questions with the knowledge that he has nothing to prove and that AJ’s accomplishments are his own and will neither add to nor denigrate from Lennox’s. How can they? Different fighters, different eras.

But headlines have been made from his comments, editorial slants have been employed as a McDonalds-grade beef instigated.

Yet regardless of the rights or wrongs of their ‘clash’, plenty have welcomed the more sinister side of Joshua. He might still not have wanted to talk about emotions or his deeper thoughts, but there was enough about the pressure he was under, enough on the pressure of the major fights not getting made, enough of the ‘normal’ rather than too much of the manufactured.

We wanted to see him riled and emotional in the Ruiz aftermath; sad, moping despondent, vengeful, furious, but there was nothing.

In the Sky interview, there was a devil-may-care outlook. He seethed.

He perhaps let boxing down by saying he did not know what concussion was, in a sport that ultimately gave birth to three key letters in modern-day sporting and medical lexicons, CTE, and it’s never a bad thing to raise awareness of that, but at least we know what is on his mind and not those of the people who speak on his behalf. 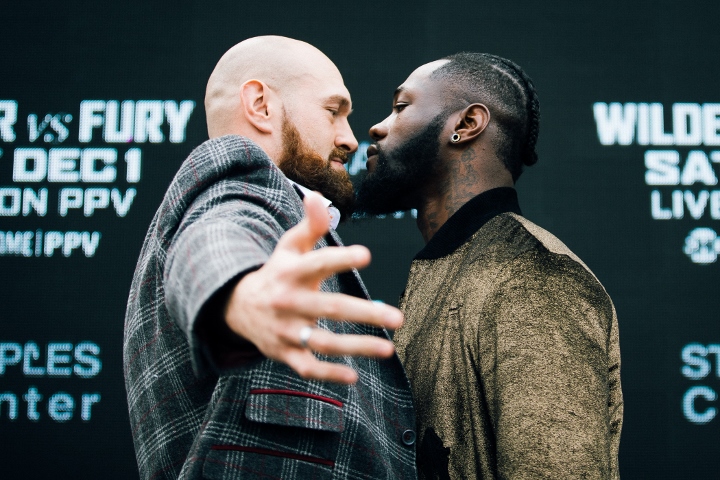 That said, the interview was recorded before news of the Saudi Arabia rematch was announced by Eddie Hearn and then contentiously disputed by champion Andy Ruiz.

There’s not a lot more to add to that other than one side says one thing while the other says something else. Believe who you will, at this stage. Time will tell.
And we have time. Because there’s seemingly no news on Dillian Whyte.

There’s no official news on when Wilder fights again even though we apparently have a date for one after the next one, and certainly – as fans, journalists, followers of the sport – we have never seemed further away from being able to point to the one true figurehead of the big league, the one man who has fought everyone, beaten most and who holds all of the belts.

If Wilder and Fury reconvene in February, then where will the other belts be by then? How long will the likes of Whyte, Usyk, Pulev et all wait for mandatory shots while the big business is taken care of? The truth is they probably will not.

Unification could be two years away, maybe longer, and then it would not even be a surprise if it doesn’t happen at all in this era. Everyone is moving around the same chess pieces but on different boards.

Everyone is running their own race, with their own cast of pacemakers, but without looking at the overall field.

Boxing’s lack of cohesiveness allows this to happen with a tedious regularity.

You can point to the welterweights as an obvious example elsewhere but it’s the big boys that have dictated the headlines and they are the cases that get our casual acquaintances, who know us as boxing guys and girls, to stop and ask us when Fury will fight Joshua, where Joshua-Ruiz is actually taking place, what’s happened to the mandatory status of Whyte and why has Wilder set a date for the fight after next but not the next one?

The truth is we can’t explain any of that, not really. We just accept that this is an odd, crazy little world we occupy that needs serious change and reform but probably will never get it.

So while it’s been a Game of Thrones-type heavyweight week and the pawns on the table have been shifted in varying degrees as the bigger pieces get ready for their more significant plays we are no further forward. Sure, it doesn’t mean this heavyweight drama has been dull, we just all hope that the season finale – whenever that might be – is worth the wait.

[QUOTE=GlassJoey;19997608]If boxing is like game of thrones, Hughie Fury is Bran Stark and will finish undisputed[/QUOTE] The both have similar power behind there punches

For real, when is this pointless rematch with Ortiz happening?

Tyson Fury is basically a chess grand master in the ring.

[QUOTE=GlassJoey;19998188]I was referring to Hughie though. David Price is Hodor, mercilessly fed to PED cheats (whyte walkers)[/QUOTE] Sorry, Chess and Hughie did not connect :lol1: .

[QUOTE=GlassJoey;19997608]If boxing is like game of thrones, Hughie Fury is Bran Stark and will finish undisputed[/QUOTE] Log off. Anybody that mentions that stupid season ending episode on any unrealed topic needs time away from all electrical advices. Play outside or…