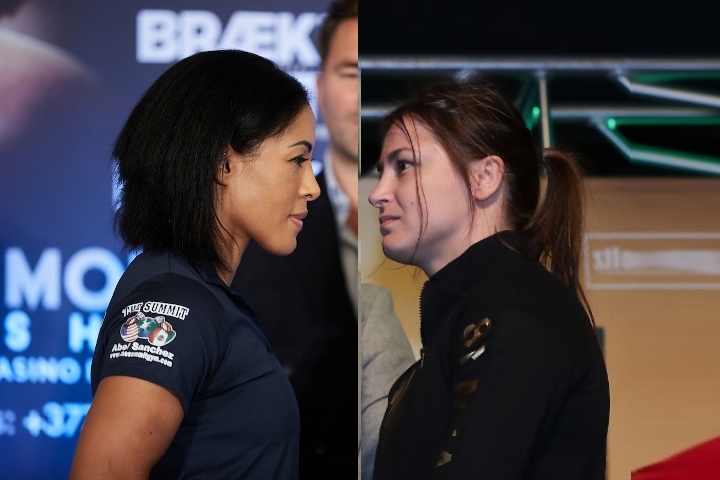 "That was a great performance from Cecilia. The future is Katie Taylor against Cecilia Braekhus," promoter Eddie Hearn said afterwards. "Another fight for both in the spring and then they will fight in the summer. It's the biggest fight in boxing.

"These two are on a collision course and in 2020 you'll definitely see that fight."

Braekhus agreed with the plans and was pleased with her performance: "It was a good ten rounds to get back in business. I got into my groove in the third round. Now I want to go on holiday and then get back in the gym."

[QUOTE=BoxingIsGreat;20226012]Katie all the way. War!:boxing: Persoon was a superwelter against a lightweight that night. Stay where you are most comfortable, Katie.[/QUOTE] It's true that Persoon is bigger than Taylor, but Persoon came at 130 lb on the scales vs Katie,…

[QUOTE=W1LL;20225448]Why is Braekhus ducking Claressa Shields then? :lol1:[/QUOTE] My guess would be , she doesn’t want any harm done to her and her family or her entourage for that matter Fugh Shields

Katie all the way. War!:boxing: Persoon was a superwelter against a lightweight that night. Stay where you are most comfortable, Katie.

Great to have female matches to look forward to. No matter what, Katie Taylor fights are a star on the calender among others. Sorta torn between going to 3 minute rounds or stay with 2. I like the action of…

[QUOTE=W1LL;20225468]Shields is going to easily defeat Habazin, then will take all of Braekhus' titles to become a four-weight champion. Easily. And Braekhus was out of the ring for 2 years so it doesn't really count as one continuous reign. :lol1:[/QUOTE]…

ADD COMMENT VIEW COMMENTS (18)
Advertisement
Top Headlines Khongsong: Josh Taylor Is The Best At 140, I Will Beat Him To Become The Best Dorticos-Briedis WBSS Weigh-In Report From Munich Taylor-Khongsong ESPN+ Weigh-In Report From London Jermell Charlo's Trainer: Rosario's Upset Was More About Julian Williams Than Him Russian Standouts Kovalchuk, Sharifov Sign With Queensberry Poland DiBella: Derevyanchenko Deserves Fair Shake; I Want The Right Guy To F--king Win! Ben Davison on Expanding Profile After Split With Tyson Fury Memo Heredia Very Impressed With Casimero's Camp For Micah Brandon Moore Looks To Stay Busy, Move Fast in Pro Ranks Joshua Would Vacate a Belt in Order To Land Fury, Says Hearn Josh Taylor Warns: I'm Going To Make It Painful For Khongsong How Much Did Derevyanchenko's Brutal Battle Against Golovkin Take Out Of Him? Michael Zerafa Rejects Tim Tszyu Clash Due To Money Mike Tyson Would Embrace Exhibition Fight With Anthony Joshua Katie Taylor vs. Miriam Gutierrez in Play For November Berchelt-Valdez Title Fight Eyed For December 12 Crawford-Brook Title Fight Nearly Done For November 14 Rosario: This Victory Will Be For Sampson Lewkowicz, The Real Champion Julio Cesar Chavez Jr, Mario Cazares - Ready For Battle Daniel Roman: Going To Steal The Show And Do What's Possible For Me To Win Sources: Canelo, Golden Boy, DAZN Meet in Effort To Work Through Impasse Memo Heredia Impressed With Lobo Torres, Will Make TMT Debut in November Pedraza: If Not A Title Shot Next, I Respectfully Request A Rematch With Zepeda Charlo Doubleheader: Top Fighters, Top Trainers Make Their Picks Briedis, Dorticos - Face-Off at Final Press Conference Lubin's Coach: We Are Ready To Fight The Charlo-Rosario Winner Next Matthysse Jr. Makes Pro Debut on Oct 24 in Sao Paulo, Brazil Dorticos: I Came Back To WBSS To Win It All, No Matter Who Or Where I Had To Fight Aaron Alameda: You'll Really See What I’m Made Of Against Luis Nery Roman: I Want A Rematch With Akhmadaliev; I Want Those Titles Back Derevyanchenko Promises To Be More Aggressive And Push Jermall Charlo Ellerbe: Charlos Will Begin Great PPV Run Like Mayweather - They Talk Sh-t But Back It Up! Josh Taylor Focused: It Only Takes One Punch in Boxing Dave Coldwell Has High Hopes For Lerrone Richards Haye Explains Why Chisora Will Down Usyk in Huge Shocker Povetkin Promoter: After Whyte Rematch, We Will Pursue Tyson Fury Loeffler: Bohachuk is One of The Most Talked About Rising Stars in Boxing What Next For The World Boxing Super Series? Nestor Bravo Decisions Jose Luis Gallegos Over Ten Rounds Fury Promoter: Wilder Trilogy Will Not Be Held Behind Closed Doors
Advertisement
Latest Boxing Videos 'The Journey - Charlo Doubleheader' 30 Minute Special Showtime Releases Trailer For Documentary 'Ringside' Charles Martin Reacts To Helenius Stopping Kownacki Robert Helenius Reacts To Shocking TKO of Kownacki Adam Kownacki Reacts To TKO Defeat To Helenius Joseph Parker Reflects on Fury-Wilder, Talks Return Mikey Garcia Reflects on Fury-Wilder, Talks Vargas Eddie Hearn Reflects on Fury Stopping Wilder, More Kenny Porter Reacts To Tyson Fury Stopping Wilder Jose Ramirez Reacts To Tyson Fury Stopping Wilder
Recent Top Stories What Next For The World Boxing Super Series? Damien Vazquez Vows To Prove He's Not Same Fighter Who Lost To Payano Daniel Roman: I Gotta Look Good, Send a Message I'm Still The Champ Jaron Ennis Boots In The Door Of Welterweight Title Contention
Advertisement
Latest Forum Threads
Advertisement
Advertisement
This website may contain adult language.
TM & © 2020 BoxingScene. All Rights Reserved.