New York - Promoter Eddie Hearn of Matchroom Sport knows the ability that DAZN has to do damage in several key weight divisions.

Right now the 160 and 168 pound divisions are heavily influenced by the fighters DAZN has signed. The key moving forward is to make the best fights at 160 and 168 with the big names they have on the roster.

“PBC have that [monopoly] at 147 and they are going a great job of matching their fighters and we have to do the same thing. The plan was always Canelo-Golovkin 3, I know GGG will keep his side of the bargain, and now we hope Canelo does too. You have to respect Canelo for his opposition... Danny Jacobs and Kovalev but next year who is it going to be, is it going to be Golovkin or Demetrius Andrade. Is it going to be Billy Joe (Saunders) or Callum Smith?” 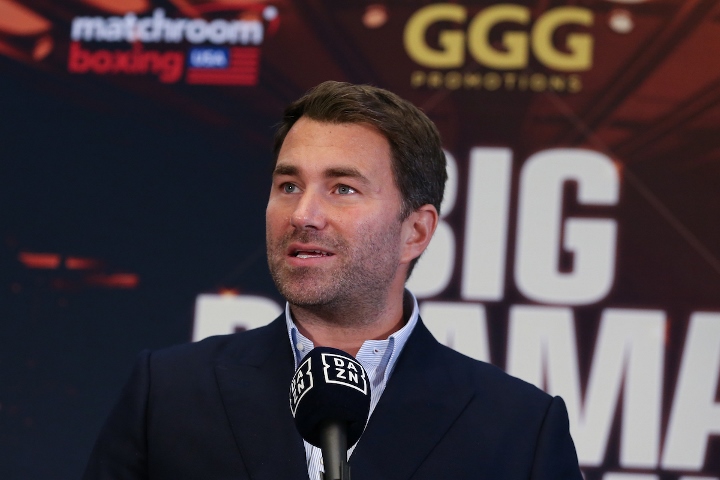 When speaking of Callum Smith (26-0, 19 KO’s), Hearn was very adamant about the possibility of matching him versus David Benavidez (22-0, 19 KO’s) who holds the WBC super middleweight champion while Smith holds the Diamond version of the belt.

“I like David Benavidez and I really rate him and like the Callum Smith fight, two big 168 pounders,” stated Hearn.

"Smith is the WBC diamond champion. He’s wanted to be the WBC champion for a while now. We’ve had about 13 WBC fights that were sanctioned."

Smith won the World Boxing Super Series tournament and now that it's over Hearn feels that he should get his shot at the WBC title.

“A lot could happen because of the tournament but now that that’s over.  I brought it up at the last convention but they told me that Benavidez has to fight Yildirim and the Dirrel stuff to sort out. After that I’m pushing Callum Smith at the next convention.”

The shot may come sooner than later, after it was revealed on Thursday that Benavidez's mandatory challenger, Avni Yildirim, tested positive for a banned substance.

“The future is streaming. Premium networks.... they’re not boxing, they’re not sports channels. Sometimes you look at the money to put in boxing versus the subscriptions, you can spend that money on another entertainment avenue. In the short term it may seem feasible to have money in boxing but in the long term they may want to say no to boxing but put the money towards to another Game of Thrones," Hearn said.

[QUOTE=Since1976;20100764]Wow he just admitted that he's as much of cancer as those that came before (yes, looking at you Don King) and the mess we see with most of the big promoters now. Andrade saw the benefits of signing with…

Wow he just admitted that he's as much of cancer as those that came before (yes, looking at you Don King) and the mess we see with most of the big promoters now. Andrade saw the benefits of signing with…

So he is admitting he wants to do the same thing that PBC is doing in keeping tho ha in house yet all you little dirty bum Whiney bigoted al haymon haters are not erupting about it? Lol....my my my…

He has no monopoly at 168. If anything the PBC guys often that division.

Monopoly at 160? Yes. (With Charlo in that Crawford spot) Monopoly at 168? Hell no, you have Smith and BJS that’s it. Benavidez, Plant, Eubank Jr etc are all “on the other side of the street”.