Hearn Wants To See Tyson Fury at Ringside at Joshua-Pulev

Joshua will return to the ring next weekend, after nearly a year of inactivity, when he faces mandatory challenger Kubrat Pulev.

Fans will be present, as an audience of 1,000 has been approved for the event.

Should Joshua win, he will be in line to face Fury in a huge unification clash in 2021. 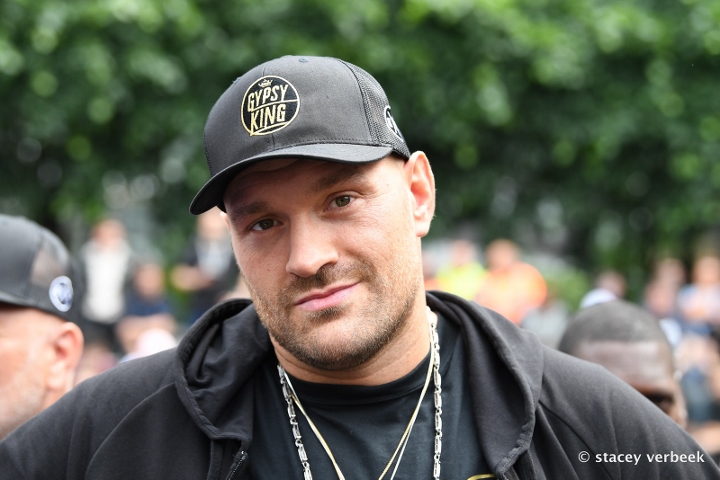 In order to build that major fight up, Hearn would like to see Fury at ringside watching the action.

"I think that he should be coming," Hearn told Sky Sports.

"If he wants to fight Anthony Joshua, it's not a case of calling him out, it's called doing his research and building the fight. Tyson Fury is more than welcome to come down. I only live 45 minutes away from Wembley. He can come around on Sunday afternoon for a roast as well, if he wants and a cuppa.

"We just want to get that fight made. But first things first, we've seen it before at Madison Square Garden with Andy Ruiz when we were talking about the Wilder fight. This is it. This is the last hurdle - Kubrat Pulev, December 12."

Fury was scheduled to return to the ring in a stay-busy fight on December 5th. He postponed his return until next year.

While Pulev is the final hurdle for Joshua to move forward with the anticipated unification, there is one final hurdle that Fury must deal with.

Deontay Wilder has initiated a legal move to enforce his rematch clause with Fury.

Fury, who stopped Wilder in seven rounds in February, believes the rematch clause has expired. They were set to face each other back in July, with the fight being pushed back several times due to the coronavirus pandemic.

But, Wilder strongly feels the rematch clause is still valid.

Both sides are now taking part in a mediation to settle the matter.

[QUOTE=Bonduu;20927187]Usyk and the WBO can shove it... we want to see undisputed baby![/QUOTE] Without that WBO title it isn't "undisputed" though, id it?

[QUOTE=Toffee;20928759]My comment makes complete sense in the context of the message I responded to. I was talking about Wilder. It's very clear he wasn't interested in negotiating for an AJ fight. That being the case, why would Hearn have Wilder…

[QUOTE=Oldskoolg;20927024]Your comment isn’t well thought out....Fury isn’t with matchroom, and he is 10 times the talker wilder is. Be that as it may, yes I would because that sells fights and it pumps the true fan up, it makes buzz,…

[QUOTE=Angeljuice;20927326]He can't prepare for Fury whilst training for Pulev, they are not the same in any way shape or form. Of course his current preparation won't be enough, he'll need to tailor his sparring partners, technique and tactics to Fury…

There is also a SMALL problem called Usyk who is gonna cause problems pushing for his Mandatory, not sure he will step aside again. Hopefully the WBO allows the Unification fight to happen before Mandatory.