Hearn To Team Wilder: Try To End My F***ing Empire, End Me!

Hearn and his company, Matchroom Sport, are contractually aligned with DAZN.

Hearn had hoped that a deal between DAZN and Wilder, who holds the WBC world title, would finally set the stage for a unification with Joshua in the fall. 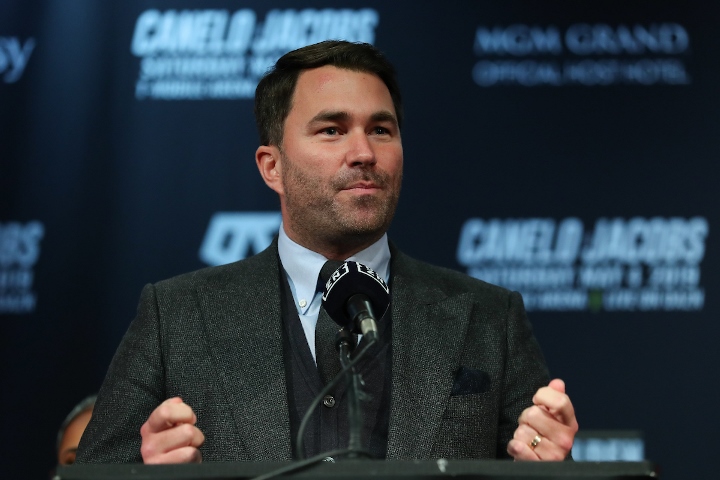 According to Hearn, Wilder's managers - Al Haymon and Shelly Finkel - are working against the boxer.

On Tuesday, Wilder and his team officially announce a May 18th showdown with mandatory challenger Dominic Breazeale. The bout will take place on Showtime, from the Barclays Center in Brooklyn, New York.

Joshua is by far the biggest star in Hearn's stable - and he's daring Wilder and his team to take Joshua down.

"Unfortunately, especially hearing people’s comments yesterday, for them it’s become not about the fighter it’s become about the business. If you listen to Shelly’s comments about 'once Wilder knocks out Joshua, Matchroom’s empire is over.' The f*** has it go to do with Matchroom empire? We’re only trying to make a fight. It’s about Anthony Joshua and Deontay Wilder, it’s about the fighters. You can’t advise someone, you can’t manage someone, if you’re thinking about an organisation, or plotting a downfall of an organisation. It’s irrelevant. It’s just about the fighters. Don’t worry about me, worry about getting the fight made," Hearn told IFL TV.

"And on that comment, if Wilder knocking out Anthony Joshua ends the Matchroom empire, end the f***ing empire. Do it. Do it. End me. Let him knock Anthony Joshua out. End Eddie Hearn. End him. Do it, don’t just talk about it, do it. So it’s becoming really frustrating. It’s disappointing and it baffles me. It completely baffles me. But the main thing is, the only pleasing thing to come out of this, is that people are now seeing the truth. And when you see the replies to his posts, people are now starting to wise up and say, 'F***, he never wanted the fight all along.'

"And the sad thing is, I don’t even think it’s Deontay. He’s just being told what to do, or brainwashed into what to do. It’s sad because the hatred is so deep that people are losing sight of what their jobs are. My job is to provide the best opportunities for my client, and I will not let any personal relationship, any grudge, get in the way of it. Because I don’t give a f***.

"You think I lose one second of sleep over Shelly Winkle and Al Haymon? They don’t mean nothing to me in my life. What matters to me in my life is Anthony Joshua becoming the undisputed champion. ‘The difference between the relationships is that AJ is my boss, whereas it’s the other way around [on the other side]. Al Haymon is Deontay’s boss."

[QUOTE=kafkod;19624634]You said this: [I]"PS - Rematch 'clauses' kinda show some fear don't you think?"[/I] And I reminded you that Wilder wanted a rematch clause too.![/QUOTE] You quoted me, but didn't read the quote. Wilder only asked for a rematch clause…

[QUOTE=MastaBlasta;19624570]You love to try and twist the truth. Wilder was saying that because 1st negotiation they included a rematch clause for AJ but not for Wilder, if either lost. So either everyone gets a rematch or no one does. Hearn…

[QUOTE=kafkod;19623662]In that same interview Hearn said that Wilder doesn't need to sign a multi-fight deal with DAZN to fight AJ. Skipper was willing to make him an offer for a one-off fight on DAZN against either AJ or Breazeale, but…

[QUOTE=Redd Foxx;19623388]What a weird fuk. This guy's is just as cringey as DLH. Makes Arum sound like a boss. At least Arum doesn't bicker and act like a little c*unt, even though he's terrible for the fans.[/QUOTE] Finkel was the…