Hearn: Saunders Would Price Himself Out of Jacobs Fight in U.S.

Jacobs even embraced the thought of challenging England’s Saunders for his WBO middleweight title in the United Kingdom during a post-fight press conference early Sunday morning at Barclays Center in Brooklyn. Eddie Hearn, Jacobs’ promoter, thinks that transatlantic trip might be the only way Brooklyn’s Jacobs could land a shot at Saunders’ title because Saunders would want too much money to box Jacobs in the United States.

“Look, the main issue is Billy Joe Saunders is not really known over here in the U.S.,” Hearn said following Jacobs’ unanimous-decision win against Poland’s Maciej Sulecki. “And it’s very difficult, if he’s gonna come to the U.S., the kind of money he’s gonna want to fight Danny Jacobs, he’s gonna price himself out of the fight. But the thing is, with the middleweight division right now, Billy Joe’s been waiting for Gennady Golovkin for a long time. And now, obviously that May 5th is not happening, September the 15th is happening. So Billy Joe’s gonna miss out on that big fight again. And there really isn’t anyone else out there for him to fight.” 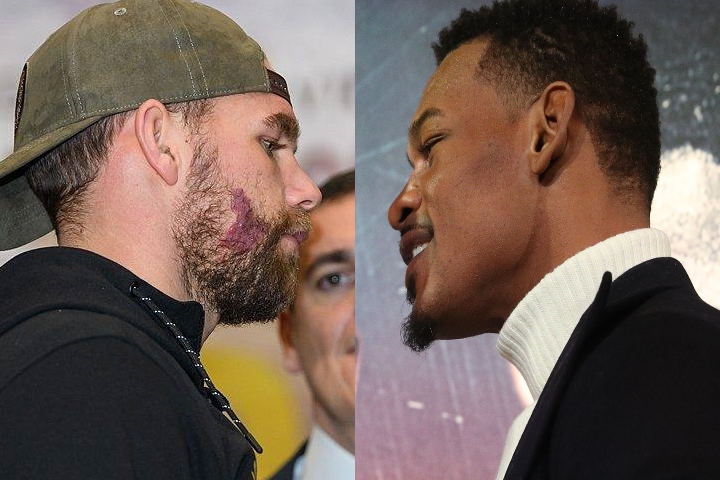 Saunders wants to battle Kazakhstan’s Golovkin in what could be a full middleweight title unification fight. First, however, Saunders (26-0, 12 KOs) is scheduled to make an optional title defense against England’s Martin Murray (36-4-1, 17 KOs) on June 23 at O2 Arena in London.

Assuming the favored Saunders wins, Jacobs, who became the mandatory challenger for Golovkin’s WBA title by winning Saturday night, would welcome boxing the skillful southpaw next because Golovkin likely is headed toward a lucrative pay-per-view rematch against Canelo Alvarez on September 15. If a second Golovkin-Alvarez bout indeed is rescheduled for that night, Jacobs (34-2, 29 KOs) would need to fight someone else later this year.

Jacobs is the WBO’s No. 2-ranked contender for Saunders’ 160-pound championship, rated behind only former 154-pound champ Demetrius Andrade (25-0, 16 KOs).

“It’s something that I’ve been pushing for for a very long time,” Jacobs said in reference to facing Saunders. “But I think he’s been using his promoter – I think Eddie and him have a little beef, something like that. I don’t know. I don’t know too much about it.”

Jacobs joked about Hearn’s contentious relationship with Frank Warren, Saunders’ promoter. That’s an obvious obstacle that could prevent negotiations from even beginning, but Jacobs is open to traveling to England for a shot at Saunders’ title.

“I would definitely love to fight him in his own backyard,” Jacobs said. “I’m that confident that I’ll beat him.”

[QUOTE=BIGPOPPAPUMP;18726254][B]Hearn: Saunders Would Price Himself Out of Jacobs Fight in U.S.[/B] NEW YORK Daniel Jacobs would "love" to fight Billy Joe Saunders next. Jacobs even embraced the thought of challenging England's Saunders for his WBO middleweight title in the United…

Basically there isn't enough more for this fight to happen in the UK or the USA. So it looked like Hearn is currently overpaying Jacobs.

Would be a good fight, and the winner would put themselves in a position for GGG-Canelo winner, if it ever happens. With the division at a standstill, and both guys not getting any younger, what do they have to lose.

[QUOTE=rudy;18729155]STFU you dont know nothing started watching Boxing from July 2017 and you think people dont know who Billy Joe Saunders your talk is rubbish he beat Eubanks, he is known in the UK, and i am sure nobody knew…

[QUOTE=cally93;18726989]No they don’t, you don’t know what your talking about, take it from a guy who lives in the UK, BJS regularly fights at the copper box arena in London which holds around 8000 and guess what? He can’t fill…