Hearn: Ruiz Will Be Safest Person On The Planet In Saudi Arabia

NEW YORK – Eddie Hearn understands the concerns Andy Ruiz Jr. and his team expressed about traveling to Saudi Arabia for his rematch against Anthony Joshua.

The British promoter is confident, though, that he has eased their worries by guaranteeing them any additional security measures they want in place beyond the protection provided by the Saudi Arabian government.

“Andy Ruiz will be the safest person on the planet,” Hearn said Thursday, following the Gennadiy Golovkin-Sergiy Derevyancehnko press conference at Madison Square Garden. “We’ve been out there. We’ve got everything completely under control. The government, Skill Challenge [Entertainment], they wanna make this [safe]. The whole world will be watching this event.” 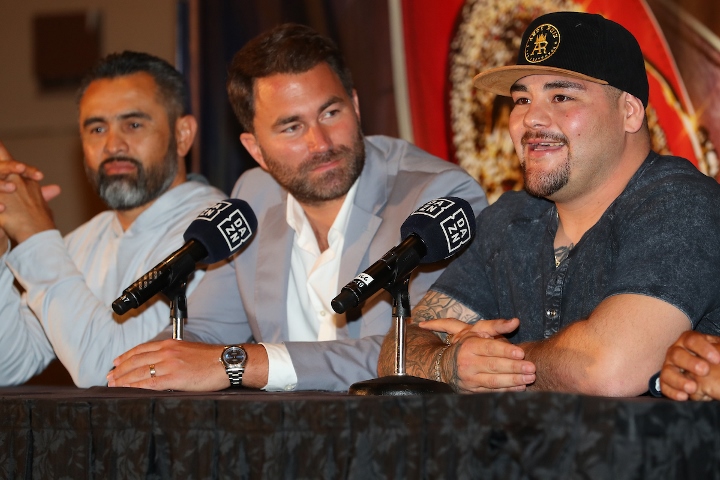 Security concerns were among the reasons Ruiz held out before completely committing this week to defending his IBF, IBO, WBA and WBO heavyweight titles against Joshua on December 7 in Diriyah, Saudi Arabia. Hearn confirmed that Ruiz (33-1, 22 KOs) and Joshua (22-1, 21 KOs) will attend three press conferences early in September in Saudi Arabia, London and New York.

“Everything that has been requested by Team Ruiz has been delivered,” Hearn said. “So, we know the security measures. It’s not, you know, [what] Bob Arum talks about with this country [Saudi Arabia]. It’s just the procedure to make sure that everybody is ultra-comfortable. Team Ruiz came back with their own questions and said, ‘We would like this in place.’ We said, ‘We will deliver that. Absolutely. Whether that’s to have an addition to your own people.’

“You’ve gotta understand, this is a government, royal family affair, where everything will be absolute perfection – perfection. And they will make sure – and we’ve seen in the buildup, we’ve seen with the agreements, we have everything in place to make sure this event is absolutely as safe as possible.”

Security for California’s Ruiz and England’s Joshua wasn’t much of an issue before their first fight, which took place June 1 at Madison Square Garden. Ruiz ruined Joshua’s debut in the United States that night, when he dropped Joshua four times and stopped him in the seventh round to pull off the heavyweight division’s biggest upset since Hasim Rahman knocked out Lennox Lewis in April 2001.

[QUOTE=Angeljuice;20015792]Are you mental? I've been to Muslim countries with no problems whatsoever, I came back with my head intact and everything.[/QUOTE] Read who I answered to and maybe, just maybe you will understand my post.

[QUOTE=Dr Rassclart;20014273]It’s a shame that the same reassurances of safety can’t be extended to women, political activists, bloggers, the LGBT community and migrant workers in Saudi Arabia. [/QUOTE] thats because they dont have a bill of rights and a constistution…

[QUOTE=andocom;20016290]Lol, you know the US government is the one selling that criminal tyrant dictatorship their weapons right, you do know they are considered close allies right and the US has numerous military bases in Saudi Arabia? Are you thinking of…