In the last few days, Tyson Fury's co-promoters, Top Rank's Bob Arum and Queensberry's Frank Warren, have explained that there is very little interest in having their fighter make a mandatory defense of his WBC heavyweight title against Dillian Whyte.

Fury is scheduled to face Deontay Wilder in a trilogy fight on December 19.

But there is a chance, due to the coronavirus pandemic, that Fury-Wilder 3 will be pushed back to 2021. 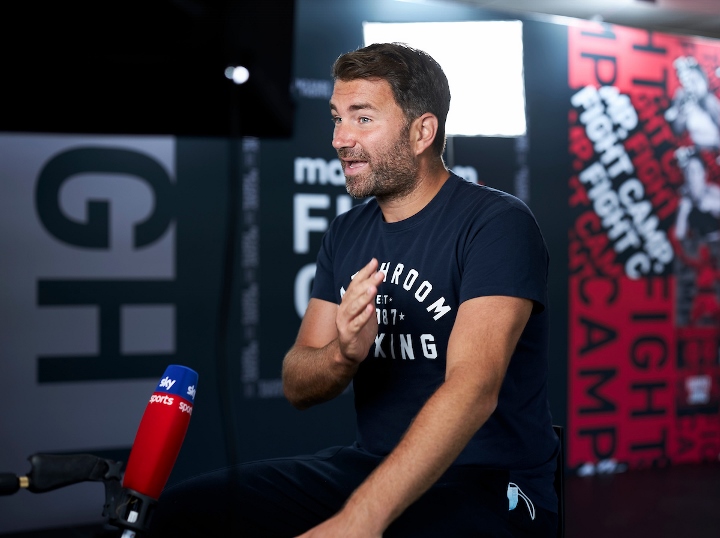 Pursuant to a WBC order, Whyte is guaranteed a mandatory shot at the heavyweight title by February 2021.

However, Arum and Warren indicate that their agreement with the WBC, with respect to the Wilder trilogy, allows for postponements.

They also indicated that Fury wants to face Anthony Joshua, the unified champion, in fight that follows the Wilder trilogy.

Eddie Hearn, promoter for Whyte, says Fury is bound to face Whyte in 2021.

"The WBC have made it clear that the fight has to happen, subject to Whyte beating Alexander Povetkin next week," Hearn told Sky Sports.

"It doesn't appear to me that there is a way around [Fury vs Whyte] not happening. Other than a 'step-aside' to Whyte, which I can tell you has absolutely no chance of happening. Or Fury vacating the WBC title which we don't want to happen either. You can't just dismiss Whyte and say: 'No, that's not happening'. You can avoid that fight, duck that fight. But it comes with consequence, which in this case would be to [vacate or be stripped of] the world championship. Nobody wants that to happen. If Fury [vacates] his belt he goes into the Joshua fight as a non-belt holder and we don't really want that.

"They are contradicting themselves because they say: 'Fury is definitely fighting this year whether Wilder is ready or not'. No problem, he can fight Whyte. He's not going to fight Joshua this year. If he is going to fight this year, and he doesn't fight Wilder, then fight Whyte! It's ridiculous of them to just dismiss Whyte. He's the mandatory challenger. If he beats Povetkin he will have been actually ordered to fight Fury or [Fury] will have to vacate. They have to take it seriously. We take it seriously.

"I see some comments saying: 'How can Eddie Hearn stand in the way of the undisputed fight?' [Joshua vs Fury] isn't happening until next summer. There is plenty of time [for Fury] to fight Whyte. And of course if the [Fury vs Wilder] fight doesn't happen, you should absolutely face your mandatory challenger."

[QUOTE=Jkp;20717305]One time a guy tried to give me a brand new red Ferrari, I said no, Ill wait until some one gives me a green Ferrari. Still waiting...[/QUOTE] Well, I can't fault a man of purpose. He knows exactly what…

[QUOTE=Froch_uppercut;20717473]Lol, that's not the context dude.[/QUOTE] It looks pretty black and white to me.

[QUOTE=Jkp;20713447]he turned down contract to fight aj for 3 world titles. After shouting and streaming he wanted it. Biggest fraud coward in division.[/QUOTE] He is on YouTube saying he "has them begging for the fight" lol, and then says they're…