You can count Eddie Hearn among the promoters keeping a close eye on the progress of current talks for a rematch between Deontay Wilder and Tyson Fury.

The formal announcement from the World Boxing Council (WBC) imposing a February 5 deadline for Wilder and Fury to reach an agreement before being subject to a purse bid hearing has undoubtedly caught the attention of promoters around the world.

In the event that Wilder and Fury can’t come to terms for a now ordered rematch to their thrilling 12-round draw last December. Should it reach that point, the winning bid will be split 60/40 in favor of Wilder as the defending champion. 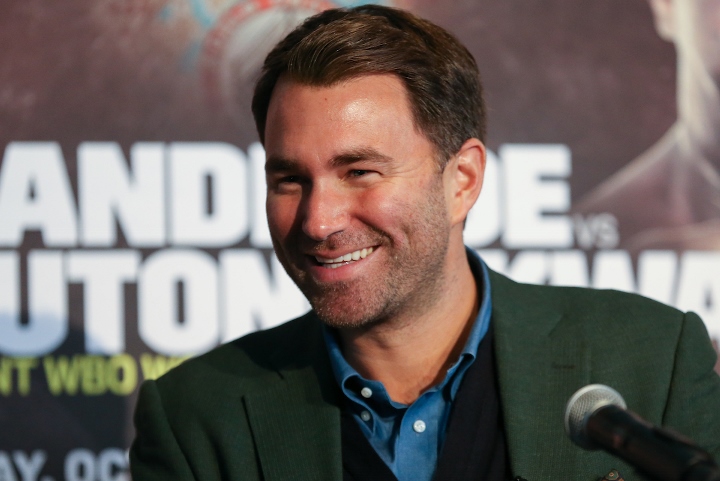 Hearn’s Matchroom Boxing—which has the sport’s greatest heavyweight gate attraction in unbeaten, unified titlist Anthony Joshua—plans to be chief among the pack of those looking to secure the rights to such a fight in the event that it reaches that point.

Hearn's Matchroom Boxing USA is the primary boxing content provider for DAZN USA's sports streaming service. More so than his willingness to promote such an event, the 60/40 split has England's leading promoter rethinking his own position on securing the services of either heavyweight as Joshua’s next opponent for a planned April 13 show at Wembley Stadium in London.

“But that’s not what was asked to be presented to them. Maybe Frank (Warren. Fury’s promoter) is just out of the loop. If he really thinks it’s 50/50, the fight isn’t going to happen next.”

Industry sources indicate that talks are actually progressing and that there remains a strong likelihood of a deal being reached for a rematch to take place in mid-to-late spring. As much isn’t at all lost on Hearn, who saw the WBC’s recent ruling for what it is—means to lock in and reach a deal without discussing other fights.

“I think the move made by the WBC was nice,” Hearn acknowledges. “I like it. It will shake things up a little bit. It will help move things along a lot quicker. Fury is an independent smart guy. He might be thinking, ‘With all the powers in boxing—Matchroom with Sky (and DAZN), Frank Warren and BT, Top Rank and his deal with ESPN. Fox and Showtime.

“Can you imagine the bidders for that fight, in our current climate?”

Should talks somehow remain unresolved by February 5, you can fully expect England’s leading promoter at WBC headquarters with envelope in hand ready to bid.

“F****n’ right I am,” Hearn exclaimed to IFL when asked if he’d plan to outbid those among a marketplace pouring more money than ever before into the sport. “I’m going to bid a fortune! But I doubt it will get there. Tyson won’t want 60/40. If he wants 50/50 against Joshua, He should be getting 60/40 against Wilder himself.”

[QUOTE=Toffee;19441949]As far as I'm concerned there are a number of fights "being made" right now. Offers are flying around, negotiations are happening. Of those fights, AJ v Wilder is the biggest and it can happen. If Fury and Wilder sign…

[QUOTE=Ray*;19440794]If he really wants to bid for it then why make your intentions known to the public? You could have shocked everyone by going to the purse bid (If the fight goes to purse bid) and winning it. Now both…

[QUOTE=Batfink;19441840]Not quite accurate currently the biggest fight being made is wilder vs fury II. Think about that for a second Joshua cannot get a bigger fight by himself he has to fight one of these two then yes that fight…

[QUOTE=Batfink;19441397] I guess it’s clear Fury Wilder II disrupts matchrooms plans for Joshua and they certainly won’t want to decide on their date until something comes back in relation to Wilder/Fury. What does this tell us about the state off…