Hearn on Yarde-Buatsi: It's a Massive Box Office Fight at The O2

Eddie Hearn says he wants a fight between Joshua Buatsi and Anthony Yarde to take place next year and believes it doesn’t need a world title to be attached to make it a big fight.

A Buatsi vs. Yarde fight was one of the stand-outs of a list sent to Hearn by Frank Warren of potential match-ups between the camps of the rival promoters.

Hearn has said he plans to meet with Warren, whom he has never met, to discuss possible fights, although he has also played down any thoughts of the two groups teaming up over a prolonged period of time. 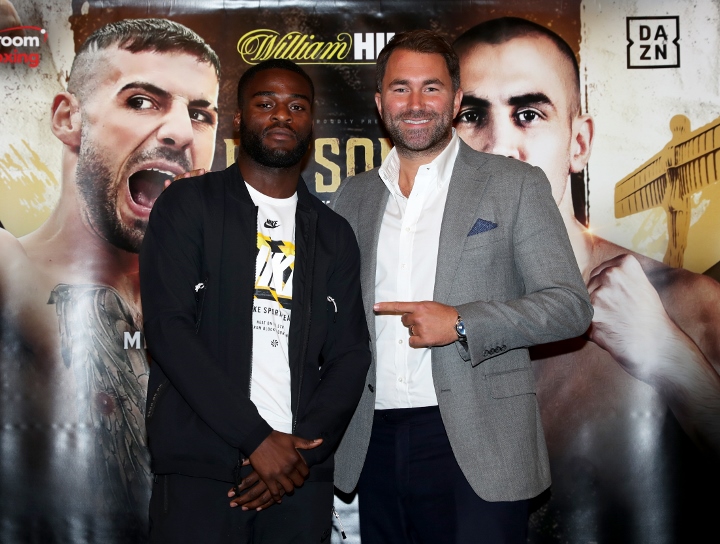 Yarde, the former WBO light heavyweight title challenger, has said himself that he sees a Buatsi fight as a long-term option, but Hearn believes it could come soon.

Buatsi is due to have his first fight in more than a year when he faces Marko Calic, of Croatia, on October 4, but Hearn has the Yarde fight n mind.

“I think that’s a natural fight,” Hearn said. “It’s a huge O2 fight for 2021. Sometimes when you get two young British talents you could say ‘one should have a world title and you can go into a world championship fight’. The world we live in today, let’s just get that made next year.

“It’s a massive Box Office fight at the O2, huge fight for both, two great fighters. But first things first, Buatsi has been out for a long time and needs to perform well against Calic.”

Not that Yarde is the only man in Hearn’s plans for Buatsi. Another fight  for 2021 could be against Callum Johnson, who has not boxed since March last year, when he stopped Sean Monaghan, his first fight since losing to Artur Beterbiev for the IBF title in 2018, when he had the Russian on the floor before being knocked out in a four round shoot-out.

Johnson is first due to face another Russian, Igor Mikhalkin, the European champion. If Johnson wins, he is likely to defend the title against Buatsi.

[QUOTE=CombatCan;20785180]Yes, that one is a head scratcher. Yarde needs a proper trainer. He is full of potential but this "side show" that he has acting as his trainer needs to go. I mean seriously. Who prepares for a world title…

[QUOTE=Squ□redCircle34;20766852]Yarde should’ve left that dung head of a trainer and went with Buddy Mcgirt who basically threw him a invite after the Kovalev fight but he was too deep down to see that Mcgirt saw something worth in the man…

Loo[QUOTE=Kezzer;20769318]Chisora price? That was just one of the warm up/undercard fights for Taylor prograis? Although Eddie co promoted And got some extra matchroom fight it I think they was led by Saunderland? Probably was one of the weaker overall cards…

[QUOTE=Mindgames;20768063]Matchroom are alright, but the standard of fight that makes PPV has gone down all around. I didnt pay for Whyte Povetkin or Chisore Price, really didn't think they were worth the money.[/QUOTE] Chisora price? That was just one of…