Hearn on Saunders Domestic Violence Video: It Was So Idiotic!

As BoxingScene.com had previously reported, Billy Joe Saunders has had his boxing licence suspended pending a hearing after footage emerged of him telling men how to hit their female partners during coronavirus lockdown.

The WBO super-middleweight world champion, who was forced to apologise less than a fortnight ago for stopping his friend, gym-mate and trainer from getting on a flight from America due to a prank, smashed a punching bag hanging in his barn while providing a running commentary.

“I just wanted to make a little video for all you dads, husbands, if you've got girlfriends,” Saunders said to the camera in the footage which was leaked on WhatsApp. “Obviously this COVID-19 is getting very serious and we are isolated away in tight spaces.

“If your old woman is giving you mouth and you try to be patient, you try to be calm, cool, but after the sixth day, you're just about to explode. All of a sudden she's coming at you, spitting a bit of venom in your face, ready to say something, you may have left the dishes out, I don't know what you've done but you've upset her.”

Continuing with the video, for which he has since apologised, the 30-year-old, who had been set to meet Saul ‘Canelo’ Alvarez in a defence of his aforementioned world title on May 2 at the T-Mobile Arena in Las Vegas, before its cancellation due to the coronavirus pandemic, said: “As she comes in, she's coming at you and you've lost it, just keep it safe with the hands. So as she comes in, she's just about to say something, all of a sudden you explode and hit her on the chin.

“At this time she may flash and see white and think: “What's happened?', she's in a state of horror, she doesn't know what's going on and all of a sudden you dip down on that knee and you finish her off. That should do the trick.” 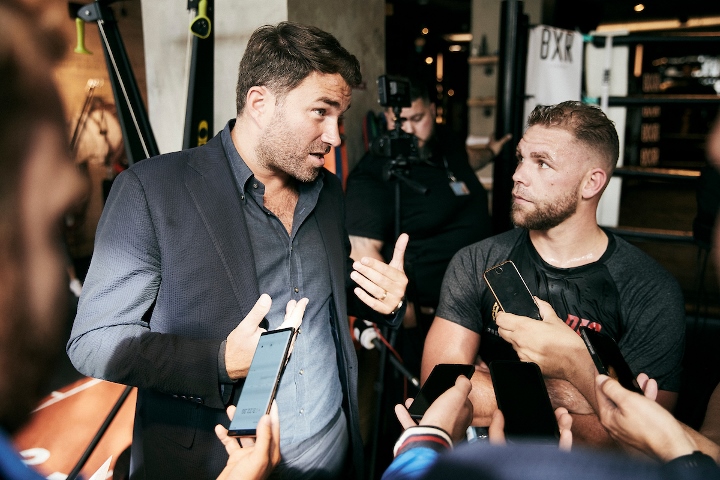 The British Boxing Board of Control released a statement on Monday afternoon, confirming that the former British, Commonwealth and European middleweight champion has had his licence pulled until further notice.

“Having considered comments made by Billy Joe Saunders on social media have suspended his boxer’s licence pending a hearing under the Board’s misconduct regulation, at a time and venue to be confirmed as soon as possible,” read the Board’s statement.

Saunders' promoter, Eddie Hearn, was appalled by the video.

"I was appalled really. It was so idiotic, it was so frustrating because I know Billy well. It's one step forward, four steps back with Billy Joe Saunders. It's unacceptable for Joe Bloggs down the street to do it. It's much more unacceptable for a world champion boxer to be doing it," Hearn told Talk Sport.

“And to do it at this time when the world is on his head, it’s so frustrating. It’s just an idiotic move.”

The chief executive of UK domestic abuse charity Refuge, Sandra Horley, added: "Domestic abuse is never a joke. It should never be trivialised. Doing so serves only to normalise violence against women and girls when instead we should be steadfastly challenging it.

"Right now, across the country, women are isolated at home with abusive partners. Sharing content like this is as dangerous as it is shocking and we should call it out for what it is: unacceptable."

Nicole Westmarland, a leading academic and activist in the area of violence against women, told BBC Sport that sponsors should "think twice" about supporting Saunders.

"He's a high profile boxer, people look up to him," said Westmarland. "He should realise that his words and his actions can have an impact. We are living though the most dangerous time for women in abusive relationships. So for him [Saunders] to do that, in this environment, is completely shocking and unacceptable."

In a statement, Adina Claire, acting co-chief executive of Women's Aid, said: "Domestic abuse is never a joking matter, but when thousands of women are trapped in their homes with a perpetrator and are fearing for their lives, whether it is supposed to be a joke or not, the Billy Joe Saunders video sends out a dangerous message. At Women's Aid we know that domestic abuse is deadly serious and costs lives."

[QUOTE=Tatabanya;20496096]Thanks man, your moniker says it all about you as well (Hagler being one of my all-time favorites!) To be honest, I'm not too much into boxing movies... I saw very little of them. Perhaps I should study the topic…

[QUOTE=Marvlus Marv;20496029]You're a top fella, keeping it real. And thanks for quenching my curiosity. Now I'll be asking my Hungarian neighbour (true) about Tatabanya. I guess this lockdown is a good time to revisit some old classics on Youtube and…

[QUOTE=Tatabanya;20493006]Haha, no gaffe buddy, though I'm a Pacman admirer from the beginnings. Never have a doubt with me, I'm as good as an angel.. :lol1: and never offended, not even by some of the genuine idiots who wander around here…

[QUOTE=Marvlus Marv;20492925]Yea man and thanks. I've never read anything 'nasty' by you so it kind of threw me a bit. I'm allowed a couple of gaffes a year. *Your name always screams Filipino to me. I'm reaching a bit but…

[QUOTE=Tatabanya;20491404]No problem mate, it's just having to type cold words rather than looking one in the eye and smiling while talking normally :beerchug:[/QUOTE] Yea man and thanks. I've never read anything 'nasty' by you so it kind of threw me…