Hearn: No One Said Anything About Smith-Groves In Saudi Arabia

NEW YORK – Eddie Hearn understands some of the criticism he has taken for bringing the Andy Ruiz Jr.-Anthony Joshua rematch to Saudi Arabia.

What Joshua’s promoter doesn’t respect is that there wasn’t any anger expressed publicly when two other British boxers, Callum Smith and George Groves, fought in Saudi Arabia last September. Smith knocked out Groves in the seventh round of their WBA super middleweight championship match September 28 in Jeddah, Saudi Arabia.

Like the Ruiz-Joshua rematch, organizers of the World Boxing Super Series brought the final of its 168-pound tournament to Saudi Arabia because they were offered more money to hold it there than anywhere else. Smith-Groves obviously would’ve been a bigger event in England, as would Ruiz-Joshua II. 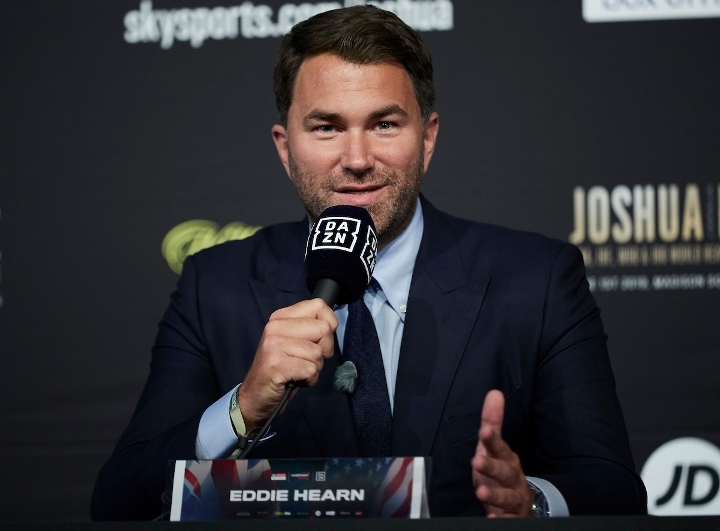 Hearn doesn’t deny that money, reportedly more than $40 million for a site fee, was the primary motivation for bringing the Ruiz-Joshua rematch to Diriyah, Saudi Arabia, on December 7. He still questions why those that have very vocally opposed holding the fight there, largely due to Saudi Arabia’s heinous history of human rights violations, weren’t outraged when the Smith-Groves card was brought there.

“We understand it,” Hearn said following the Gennadiy Golovkin-Sergiy Derevyanchenko press conference at Madison Square Garden. “I understand not everyone’s gonna be happy. And people say, ‘Oh, you’re hiding behind the WWE, the World Boxing Super Series, Formula One, the European Tour [golf], the tennis Super Cup.’ These are all major events, by organizations that are much, much bigger than Matchroom and much, much bigger than this fight. When George Groves boxed Callum Smith in the final of the World Boxing Super Series in Saudi Arabia, no one said one thing – not one thing.”

Hearn, Smith’s promoter, wasn’t involved in the Smith-Groves promotion. He feels that difference has something to do with why there has been such strong opposition to the Ruiz-Joshua rematch taking place in Saudi Arabia.

“It’s me, but it’s more the profile of the fight, the size of the fight,” Hearn said. “And people wanna criticize. There was no one really pushing that [Smith-Groves] fight. So, if I did that fight, I would’ve got a load of stick. But not as much stick as [now].”

Amir Khan, another British boxer Hearn promotes, also fought in Saudi Arabia recently. Hearn was not involved, however, in the promotion of Khan’s fourth-round stoppage of Billy Dib on July 12 in Jeddah.

Ruiz (33-1, 22 KOs), of Imperial, California, and Joshua (22-1, 21 KOs), of Watford, England, will participate in a three-country press tour early in September to promote their immediate rematch. They’ll make stops in Saudi Arabia, London and New York.

I think it's weird that Hearn isn't doing everything in his power to stall this fight until Ruiz agrees to fight in the UK, like he did another PBC heavyweight.

I didn't put much stock into the Smith/Groves card beforehand but when I watched I did notice the awkwardness of the disinterested all male crowd in attendance. Politics of it aside, even when watching on television, I enjoy a passionate…

It's not JUST a cash grab. The Saudis could be offering annual $100-200m fights and will develop relationships with top promoters. To refuse them today would mean they're less likely to deal with you later. From Eddie's perspective, had he…

[QUOTE=Eff Pandas;20012819]Groves vs Callum coulda happened on the sun. Fans are more into HW fights like this one & Joshua is 100x more popular than those two combined & they have actual interest in Joshua fights.[/QUOTE] I think this is…