Hearn: Miller Has A Big Heart, But You Can't Ignore What Happened

NEW YORK--The mere presence of Jarrell ‘Big Baby’ Miller at the post-fight press conference was as surprising to Eddie Hearn as was any suggestion of the two ever again doing business together.

To his credit, the veteran promoter bore a grin and took it all in stride.

The two were reunited on Madison Square Garden grounds, fittingly since it’s where they were to conduct their past piece of business. Hearn was on hand to promote the latest ring adventure of rising lightweight star Devin Haney, who scored a 4th round knockout of Zaur Abdullaev in their interim title fight last Friday live on DAZN from the Hulu Theater. Most of the room had cleared by the time the promoter stayed a little longer to conduct interviews with the remaining media following the post-fight presser. 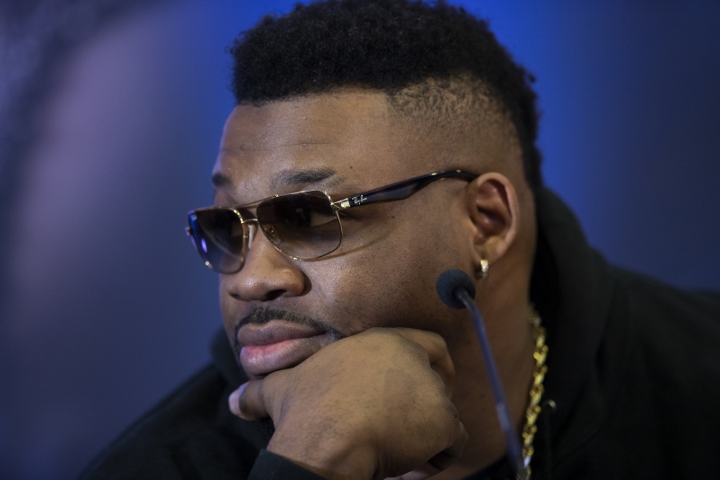 Quietly making his way to Hearn’s side was Miller (23-0-1, 20KOs), marking their first interaction since the Brooklyn-bred heavyweight tested positive for multiple banned substances, thereby forfeiting his scheduled June 1 challenge of then-unbeaten and unified heavyweight titlist Anthony Joshua in MSG’s main room. The two were cordial, with Miller even catching the room’s attention by owning up to the damage he caused in the aforementioned scheduled event.

“That’s one of the first times I’ve heard him say (his) mistakes, etc.,” Hearn told BoxingScene.com and other reporters on hand. “I think that’s important to say it. I believe that he has a big heart—but you can’t ignore what happened.

“That’s another story. You got to hold your hands up and say ‘I’ve done wrong.’ That’s it.”

Miller’s fallout paved the way for Andy Ruiz (33-1, 22KOs) to slide in and take his place on less than six week’s notice. It proved to be a historic replacement, as California’s Ruiz recovered from a knockdown to score four of his own en route to a 7th round stoppage in becoming the first-ever Mexican boxer to capture a piece of the heavyweight crown.

All that can be left to ponder is how original plans would’ve played out.

“It’s one of those situations where it changed everybody’s life. We’ll see if (Joshua) can put it right on Dec. 7, if we see a different AJ on Dec. 7 and he will have to be in order to beat Andy Ruiz. We’ll see whatever moves (Miller) makes, if it’s ESPN or whatever.”

England’s Joshua (22-1, 21KOs) is due to face Ruiz on Dec. 7 at a yet-to-be-erected venue in Diriyah, Saudi Arabia. Meanwhile, Miller’s co-promoter Greg Cohen is reportedly in advanced talks with Top Rank for a deal that would bring the Brooklynite to ESPN.

Ever the self-promoter, Miller half-jokingly asked if Hearn was still interested in his services and how much he’s appreciated the red carpet treatment afforded him by DAZN. Interestingly, his name continues to come up in Hearn’s circles.

“You know, it’s remarkable… AJ was asked the question (if he would still) fight Big Baby,” Hearn revealed of a sequence which took place during the three-day, three-country press tour to promote Ruiz-Joshua II. “AJ said ‘Yeah, I’d love to fight him.’ I was really surprised by that.”

“He was pumped for that (June 1) fight (with Miller), really pumped for that fight. When the pin was deflated from him and he had to fight Andy Ruiz—and I’m not taking anything away from Andy, he was brilliant—but (Joshua) didn’t have that same spring in his step.”

Miller’s self-imposed six-month suspension—in conjunction with a ruling from the World Boxing Association (WBA)—expires on Sept. 19, at which point he plans to obtain a boxing license with any state commission who will approve him, in efforts to resume his career.

[LIST=1] [*]VADA found nothing, that's just a fact [*]UKAD claim to have found whatever but they won't say what it is, when or what THEY did with the B sample. [/LIST] [B]Lastly, if it comes down to VADA vs the…

[QUOTE=GlassJoey;20074759]Big Baby has a big heart from all the cheeseburgers and PEDs. Hearn only wants to work with Miller again because he’s easy work for AJ[/QUOTE] Aw damn you got the joke in before I did. Respect sir.

In fairness he likely got the enlarged heart from all the banned substances hes taken.