Hearn: Leonard Ellerbe Has Turned Into Quite a Bitter Man

At the Golovkin-Derevyanchenko press conference, Hearn took aim at other promoters - who he claims are stalling fights because of network affiliation, in particular the Gervonta Davis-Tevin Farmer unification bout at 130 pounds.

“Let the fighters earn their money,” Hearn told reporters. “Don’t let the networks and ego get in the way. DAZN don’t have the ego. They say to me you do what you feel is right, what I feel is right is never obstruct a fighter from making lucrative paydays if they have to go in another network. Jose Ramirez just did it, Bob Arum let him do it and he got paid and came back with two belts. If Davis is that good, he goes back to Showtime with two belts.” 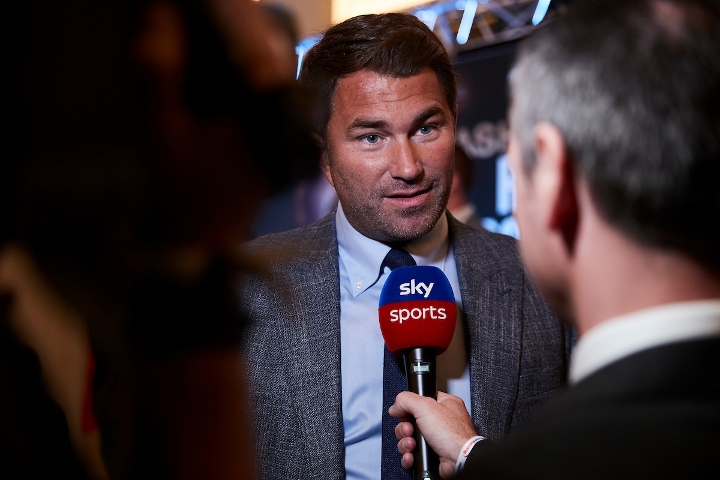 Hearn spoke about the communication or lack thereof between himself and Mayweather Promotions Leonard Ellerbe, who promotes Davis.

“Pretty poor,” Hearn said of the communication between the two. “I always email Leonard Ellerbe. Here’s 4 million, here's 5 million. I don’t really get replies. I only got one. Leonard Ellerbe has turned into quite a bitter man. Because I look at my twitter and he’s liking all the criticism about me.”

Hearn went on as much as to call Ellerbe a “hater” because of his recent actions.

“He calls DAZN, the dead zone,” stated Hearn. “He’s become a hater. He’s always talking about haters and how bad they are. Why would Leonard Ellerbe hate on a platform that is giving fighters an opportunity to make career high payday to box more often than they’ve ever box before."

“Ellerbe should know better,” explained Hearn. “He should be actively encouraging DAZN to pay fighters more money. When I look at Showtime, I’m not criticizing Showtime, FOX, or ESPN, I think it’s brilliant. I think any platform that’s investing in the sport of boxing and are letting boxers in this dangerous sport earn career changing money should be encouraged. Why is he trying to put down DAZN, is he scared, is he a hater?”

Jokingly, Hearn wants the old Leonard Ellerbe back, the one that was about making deals.

“What happened to him?” questioned Hearn. With all these camera here, I’m appealing to him my friend. We want the old Ellerbe back. Don’t sit behind your keyboard liking tweets of people bashing me, what’s happen to you. You’re a stylish dude, you’re a cool guy, and don’t be a hater."

[QUOTE=giant_king;20012846]lol man u in this to deep do you know hearns stock investments as well and what he eats for breakfast lol get a life buddy relax hahahaha but anyway I was simply agreeing on how promoters should stop attacking…

[QUOTE=Scipio2009;20011909]Hearn isn't splitting the billion dollars, and it was Eddie Hearn (after having a pretty decent relationship in the US) who tried the hostile takeover, so what are you even talking about?[/QUOTE]lol man u in this to deep do you…

We still talking about this fat dosser? How anybody can defend the man when he openly talks about wanting the fighters he works with to DUCK DUCK DUCK all threats is beyond me.

[QUOTE=sicko;20010040]I agree actually, I think $2 Million is too much for Farmer[/QUOTE] You make the offer that gets everyone happy to make the fight. $2m as the guarantee should make the deal; DiBella is a stand-up operator and man, Tevin…

[QUOTE=giant_king;20008449]I'm not a big fan of hearn but he does make a point there they all should be in this together not against each other[/QUOTE] Hearn isn't splitting the billion dollars, and it was Eddie Hearn (after having a pretty…