Whether Jarrell Miller will remain his opponent apparently has not yet been determined. Hearn, Joshua’s promoter, also confirmed the adverse finding from the urine sample Miller provided the Voluntary Anti-Doping Association on March 20.

VADA has been contracted to administer the performance-enhancing drug testing for their 12-round heavyweight title fight scheduled for six weeks from Saturday night in New York. ESPN.com was the first to report Tuesday night that Miller tested positive for GW 501516, also known as endurobol, a banned substance that can burn off excess fat, speed up recovery while training and significantly enhance endurance. 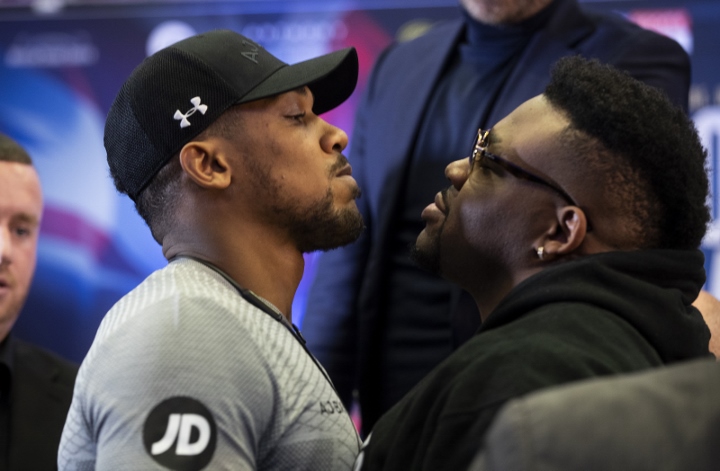 Hearn issued a statement through his Twitter account Tuesday night, which read: We have been informed by VADA that there has been an adverse finding in Jarrell Miller’s sample collected March 20th, 2019. We are working with all relevant parties and will update with more details soon. AJ’s preparation continues for June 1st at MSG.

“We are in the process of obtaining further information about VADA’s finding and will have more to say soon on this developing situation,” Salita said. “In the meantime, Jarrell continues to train for his June 1 fight against Anthony Joshua.”

If Miller (23-0-1, 20 KOs) is removed from their fight, any potential replacement for the Brooklyn native would have roughly a month-and-a-half to prepare to challenge Joshua.

If failing this test keeps Miller from fighting for Joshua’s IBF, IBO, WBA and WBO titles, it’ll also cost Miller a $6.5 million payday, by far the biggest purse of his career. The 29-year-old Joshua (22-0, 21 KOs), a mainstream superstar in his native England, reportedly will be paid in excess of $30 million for his debut in the United States.

The trash-talking Miller has accused Joshua of using PEDs, both before and after their fight was made.

It was Miller, however, who failed a PED test nearly five years ago, when he also was a kickboxer. The California State Athletic Commission suspended Miller for nine months and fined him $2,500 because he tested positive in June 2014 for methylhexaneamine, a dietary supplement used for weight loss and improving athletic performance, among other things.

Miller, 30, explained during the press tour nearly two months ago to promote his fight against Joshua that he failed that test because he used a product that he wasn’t aware was on the list of banned substances.

[QUOTE=MastaBlasta;19664964]Weak dirty nation? You best re-study your World War I & II history. You'd be speaking deutsch if not for America. Now back to boxing ... :boxing:[/QUOTE] No you need to you absolute moron the coward yanks entered both wars…

[QUOTE=Lemonhead_Jeff;19668192]I never once used the phrase "performance enhancer". I only stated that BJS failed a 'drug test', which he did, causing him to relinquish his title as result. Weather the substance was widely banned or only by VADA is not…

[QUOTE=Kezzer;19669221]That was the point at the time, Wilder had left the country before they had even made a ruling. In fact if I remember right he was gone within twenty four hours? It’s a real shame because wilder could have…

[QUOTE=Ake-Dawg;19668712]You do not take meldonium by chance either. Wilder never had to pay anything back. He sued for the purse, won, WOB appealed and had that decision reversed. The only thing that was up for debate was whether or not…

[QUOTE=Kezzer;19668468]If proven - this substance isn’t something you take by chance. Also Povetkin’s was debated to the extent wilder had to pay back the earnings he was originally going to claim . Does raise an interesting point - could Joshua…