Hearn: When Jacobs Beats Canelo - He'll Be Pound For Pound #1

The contest takes place on May 4th, from the T-Mobile Arena in Las Vegas.

Hearn has long believed that Jacobs was robbed on a decision win back in March of 2017, when the Brooklyn boxer lost a twelve round unanimous decision to Gennady Golovkin. 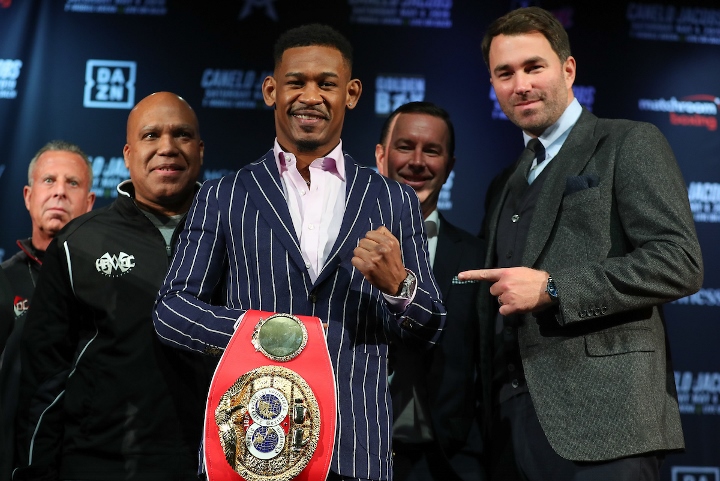 While there are  many experts who rank either Terence Crawford or Vasiliy Lomachenko as their pound-for-pound king, Hearn believes that crown will get handed to the winner of next month's fight.

"The winner of this fight I think is the No. 1 pound-for-pound in boxing, and when Danny Jacobs beats him, he will get his rights to call himself just that," Hearn said.

There has certainly been a lack of pre-fight banter in the weeks leading up to their fight. Hearn believes the fight is so good, and so anticipated, that there is absolutely no reason for the two boxers to do any trash talking.

"Not when you are at this level, in my opinion. The trash talk and the hype is great and it helps to build a fight that might not be easy to build. But when you have a fight like this where cave is certainly the biggest star in U.S. boxing and possibly in world boxing, and Danny Jacobs is a middleweight world champion, and his story is echoed around the world of sport; I think that when you have got these two coming together in a unification fight, I don't really see the need for bad blood," Hearn said.

Why does 1 win in boxing consider you the best p4p now in days:sigh1:

[QUOTE=Redd Foxx;19686944]Now you're just squirming. You're one of these fanboys who did the typical, robotic, fanboy thing by trying to protect your master. You couldn't actually articulate a point though so you're babbling about "disproportionate"... Maybe next time just put…

Well we've seen Canelo beaten at least a couple of times before. Getting a decision over him would be the biggest accomplishment of Jacob's career because it will have meant that he won every second of every round so convincingly…

If JACOBS beats CANELO he will be no.2 behind CRAWFORD.

P4P numbers 1 and 2 are Crawford and Lomachenko or Lomachenko and Crawford. Canelo is a solid number 3. That could change depending on how the Canelo/Jacobs fight turns out, but if it is a close fight, not much changes.