Hearn: I'm Worried About Andy Ruiz, It's a Bad Style For Joshua

There is less than a week remaining, before IBF, IBO, WBA, WBO heavyweight champion Anthony Joshua makes his debut in the United States.

Joshua will face once-beaten Andy Ruiz, who accepted he fight on late notice after original opponent Jarrell Miller was pulled when he tested positive for performance enhancing drugs. 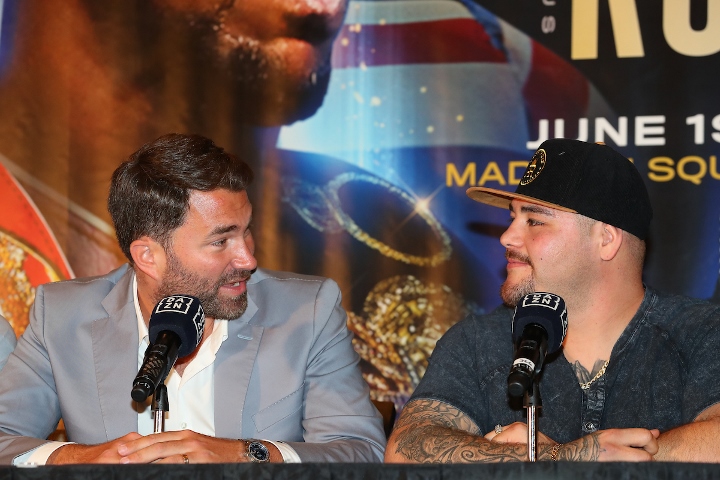 Hearn is worried about the contest, explaining that Ruiz's style of fighting is not something that is favorable to Joshua.

“It’s a bad style for AJ,” Hearn said to The Express. “Because you look at the smaller guys he’s fought - Takam, Povetkin - he’s struggled a little against that style. Ruiz is a lot quicker than both of those guys. He probably doesn’t punch as hard as Povetkin, but he’s got pop.

“What I like about Andy Ruiz is, I don’t think he even the opportunity that’s in front of him right now. He’s just going to have fun. He’s going to let his hands go, he’s going to try a Mike Tyson style; get on the inside, work Joshua’s body, let the big hook go over the top. This is going to be a firefight. Joshua’s got to be on this. Everybody’s talking about Deontay Wilder, the undisputed fight, ‘when’s it happening?’

“Worry about Andy Ruiz. He is a problem next Saturday. You take your eye off the ball in this heavyweight game, like that (he clicks) it’s over, and we can forget about those fights.”

Hearn wants Joshua to react strongly to the recent victory by WBC heavyweight champion Deontay Wilder, who knocked out Dominic Breazeale in a single round on May 18.

“The pressure is on Joshua,” Hearn said.

“We saw a great performance from Wilder [against Breazeale] one week ago, now Joshua’s got to return the fire. He’s got to put in a dominating performance against Ruiz and he’s got to knock him out.”

[QUOTE=_Rexy_;19777693]Thought my sarcasm was obvious lol. Maybe we need a sarcastic font?[/QUOTE] I received it. The 78 was a dead giveaway. That was for others moreso than you tbh.

[QUOTE=Ake-Dawg;19777654]I some of them because they didn't understand how resale tickets work and a UK publication reported prices which were significantly higher then the prices for Wilder's fight. However those were initial prices that did not reflect the market adjustment.[/QUOTE]…