Hearn: If Wilder is Not Ready, Whyte Should Get Immediate Fury Title Shot!

Promoter Eddie Hearn, who works with heavyweight contender Dillian Whyte, is not convinced that Deontay Wilder will be physically ready to fight WBC world champion Tyson Fury in 2020.

Back in February, Fury dropped and stopped Wilder for the WBC world title.

Afterwards, Wilder exercised his contractual right to an immediate rematch. He also underwent surgery for a left bicep injury. 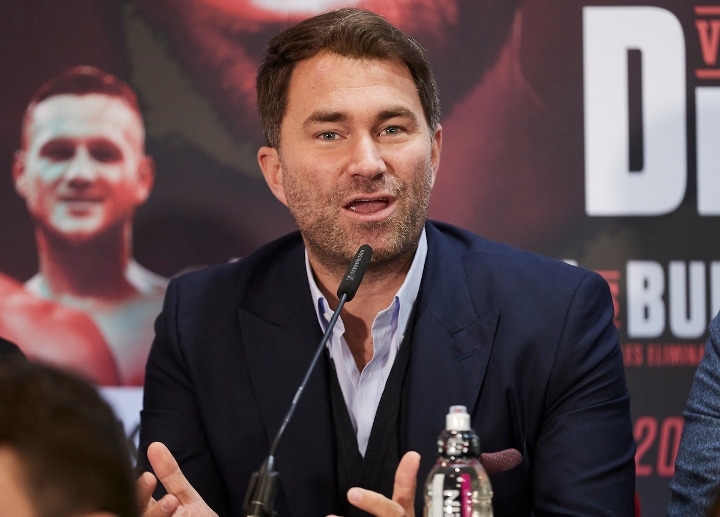 The trilogy fight was initially pegged for July 18th, but then pushed back due to the coronavirus pandemic. At the moment the third bout is being targeted for the final few months of the year, as it requires an audience to move forward.

Whyte is the WBC's interim champion and the mandatory challenger to Fury's title.

The winner of the trilogy has to face him by February 2021.

If Wilder is not physically ready to go, Hearn believes the Whyte should get an immediate crack at Fury's world title.

"I’m not sure Wilder will be ready this year, I’ve got a funny feeling. So I’d like to see Dillian Whyte jump in and fight Tyson this year. If Wilder’s not ready, it should be absolutely 100 percent be made by the WBC," Hearn told IFL TV.

"If Fury fights Whyte, you’re still going to get an undisputed British heavyweight fight because the winner will fight AJ. We’re ready to make AJ against Fury now but we’re not ignoring Dillian Whyte must get what he worked hard to get and what he’s been promised, which is a heavyweight world title shot.

"Where are they going to do this fight? We haven’t heard from Wilder for a long, long time. He had an operation? The money isn’t going to be great for this fight because there won’t be any crowd. No one wants to see the fight… I don’t know. All I’m saying is if Wilder’s not ready then Dillian should have that shot straight away."

[QUOTE=davefromvancouv;20591764]I see Joshua fighting Pulev, Chisora (after Chisora absolutely pummels Usyk), then a Chisora rematch after Joshua gets knocked out (again) in the first fight.[/QUOTE] I got AJ beating Chisora by UD.. Or AJ might can wear him down and…

[QUOTE=5000boxing;20591672]I think The money will get AJ in the ring.. But wilder Probably has to fight him in Abu Dhabi to get the biggest payout..[/QUOTE] I see Joshua fighting Pulev, Chisora (after Chisora absolutely pummels Usyk), then a Chisora rematch…

[QUOTE=davefromvancouv;20590145]I agree. Fury, Whyte and Dubois are the next KOs for Wilder. But I doubt Joshua will want anything to do with Wilder after the Fury fight.[/QUOTE] I think The money will get AJ in the ring.. But wilder Probably…

[QUOTE=Monty Fisto;20589968]Or trying to get a title shot for a fighter he promotes.[/QUOTE] One does not exclude the other.