Hearn: Haney Has 'Absolutely Everything' To Become Global Star

The prodigious prospect will meet Mexico’s Antonio Moran in a 10-round fight that’ll headline a seven-bout card at MGM National Harbor in Oxon Hill, Maryland. Soon, however, promoter Eddie Hearn envisions Haney participating in bigger fights because the 20-year-old lightweight wants to test himself in championship-caliber bouts.

“One thing that inspired me to work with Devin Haney and the team was their willingness to fight everybody now,” Hearn said during a recent press conference at MGM Grand. “There was nobody that Bill [Haney’s father] wasn’t up for fighting. He was due to fight [Zaur] Abdullaev in a WBC eliminator that was called, that didn’t materialize after their team refused to take the fight on this [Canelo Alvarez-Daniel Jacobs] card, actually, on May the 4th. Then he said, ‘Let’s fight Teofimo Lopez. Tell the WBC to order that fight.’ I mean, you’re talking about mega, mega fights that this young man is already willing to jump into at the age of 20. Quite incredible. You look at those fights – Teofimo Lopez, Luke Campbell, Vasiliy Lomachenko, Ryan Garcia – the amount of super-fights that are out there for Devin Haney is quite extraordinary.” 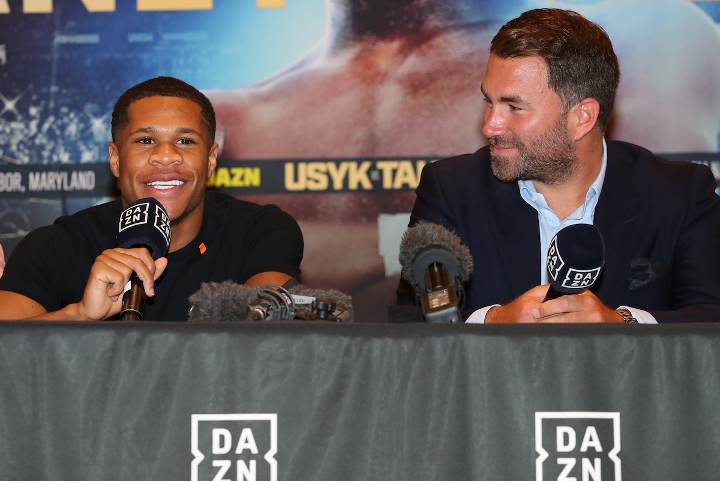 Las Vegas’ Haney (21-0, 13 KOs) was willing to scrap the Moran match to fight Luke Campbell for the vacant WBC 135-pound championship July 27. Campbell and Haney agreed to a deal for that bout, but the WBC instead ordered Campbell to face Lomachenko, the WBA/WBO champ, for the unclaimed crown Mikey Garcia gave up last month.

In Moran (24-3, 17 KOs), Haney will encounter a 26-year-old opponent who hasn’t been knocked out since he turned pro in March 2012. In his last fight, Haney out-boxed then-unbeaten South African Xolisani Ndongeni (25-1, 13 KOs) in a 10-rounder Showtime televised January 11 from Shreveport, Louisiana.

“The work ethic of this young man is incredible,” Hearn said of Haney. “Finding out that he came here at 7 years old, to Vegas, everything about Devin Haney’s life is the sport of boxing. And it’s so inspiring as a promoter to be around a team of people with that work ethic, who work so hard day in and day out to achieve their dreams. And I have ensured Devin Haney and Bill and Devin Haney Promotions that we will make sure that we deliver absolutely everything that we say we will deliver.

“We will give you the opportunity for greatness. The only thing that will stand in your way is hard work and talent. And I know that he has both of those things in abundance. This, right here, is one of the future stars of the sport, if not the star of the sport now. And he’s a major signing for Matchroom to break into an elite level of U.S. fighters that can become not just U.S. stars, but global stars in the sport of boxing. Devin Haney has absolutely everything.”

[QUOTE=James Hunt;19768770]Exactly! The primitiveness of PBC shills is unbelievable.[/QUOTE] Funny because YOU PEOPLE thought it was just fine, remember????? Your anti PBC rants?

[QUOTE=greeneye99;19768253]Its Dazn....get it right "Should have gone with.." Listen Go back to school with that Hating bro[/QUOTE] THE ENEMIES USE HATE AS A WEAPON, THAT WEAPON WORKS APPARENTLY, SO THAT WEAPON WILL BE USED ALSO, JUST AS [B]THEY DID/DO[/B] "GOTTA…

[QUOTE=BigStomps;19767575]DAMN! Look at all these silly hoes on here hating on Haney, Eddie Hearn and DAZN,.... What a bunch a pathetic punks they are! 😂🤣 Just cause they love to swing off Al Haymon's nutts and suck his dick at…

I think Haney is right where he needs to be. Getting paid and seasoning. He's in no rush and will take on better opponents as they come. His body is growing and I wouldn't be surprised if he's at welter…

[QUOTE=HURTFEELINGS;19767418]Love DEVIN but hate dzne he shoule've went with PBC:notworthy[/QUOTE] Its Dazn....get it right "Should have gone with.." Listen Go back to school with that Hating bro