Callum Smith may be back in the ring in a couple of months’ time.

Smith has been out of the ring since making the first defence of his titles at Madison Square Garden in New York back in June when he stopped Hassan N’Dam, dropping him thrice inside three rounds. 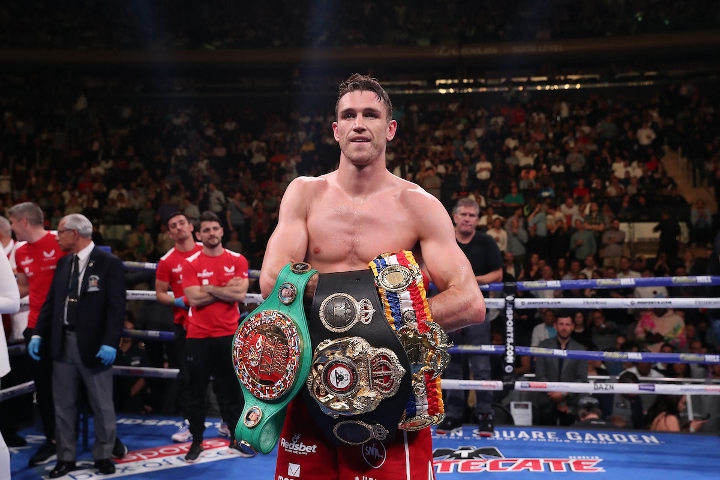 And despite Gallagher telling Boxing Scene recently that Smith has grown frustrated by the lack of opportunities and confirmed fight dates from his promotional outfit Matchroom Boxing –– and that they are mulling over a number of other lucrative options –– it appears that Eddie Hearn, Matchroom’s head honcho, is keen to get Smith out soon.

“We want to get him out in November,” the aforementioned Hearn said in a recent interview with Sky Sports. “We want to run him out before, basically, in 2020, putting him straight into the big fights.”

November 23 has been reserved at the M&S Bank Arena in Liverpool, Boxing Scene understands, for the return of ‘Mundo’.

“There is a date and conversations ongoing with Liverpool Football Club for [a potential fight at] Anfield in May and that would be massive,” he continued. “That’s bucket list stuff for Callum Smith and he’s made good money and won world titles, but that’s the sort of occasion he needs to get his teeth into and I will guarantee an Anfield fight in May or June next year.”

John Ryder, the current WBA interim world champion at super-middleweight, is Smith’s mandatory and Hearn said that it was a “good all-British fight if it could be made.”

Further details regarding the next move of Callum Smith will be revealed in due course.

[QUOTE=Scipio2009;20042703]Are you really going to try and argue that "Fast Car" Eddie Hearn isn't something that came directly from the Hearn family and Eddie Hearn himself? Honestly?[/QUOTE] It’s been rinsed before Eddie Hearn came into boxing. And LDBC ding dongs…

Mundo should really be in LA at the end of the month to sound out the Dirrel/Benavidez winner!

[QUOTE=I'm Widdit!;20041860]“Fast Eddie” is an LDBC phrase. Y’all love that guy innit[/QUOTE] Are you really going to try and argue that "Fast Car" Eddie Hearn isn't something that came directly from the Hearn family and Eddie Hearn himself? Honestly?

[QUOTE=Oldskoolg;20041495]“We want to get him back....”.....who’s we? His statement should be “smith told me he wants to do this and that and fight him and him and this is how I’m going to make that happen.”[/QUOTE] Eddie Hearn is negotiating…

Ryder may be the toughest fight yet for Smith... although I do think Smith wins it. As for BJS, I have my doubts Smith can beat a slick boxer like Saunders. Both will be fun fights though.