Like most promoters in boxing, Eddie Hearn tends to oversell even fights he knows won’t justify his hyperbole.

It’s part of the job, and Hearn is among boxing’s best salesmen. But even Hearn has tempered expectations as YouTube rivals Logan Paul and KSI head toward their six-round cruiserweight rematch Saturday night at Staples Center in Los Angeles.

Hearn admires how Paul and KSI have generated interest in what will be the pro debut for both boxers. He just doesn’t anticipate anything resembling a great fight when they square off in a main event DAZN will stream in the United States and Sky Sports Box Office will televise via pay-per-view in the United Kingdom.

“What I love about this event is that the buildup, everything – great, hilarious, huge,” Hearn told BoxingScene.com. “And it’s all like, ‘Wow! This is great. Yeah! Subscriptions and numbers.’ But it’s like, ‘You know tomorrow you’re gonna have a fight, right? And it ain’t gonna be pretty. You know that, don’t you? And you’ve got these little gloves on.’ So, at what point [Friday] does it get so real for them, or [Saturday morning], when they wake up and go, ‘Oh, sh*t! It’s fight day.’ That’s the amazing thing about this whole thing, is that the buildup, all that, it doesn’t matter. It’s real [Saturday] night. This isn’t a game. You know, this isn’t FIFA, right? This is a fight.

“And I find that fascinating, that two guys can put themselves in position, so much so, they can become so invested and actually believing their hype. I mean, I heard Logan say he can become a world champion. I heard KSI saying he can beat a lot of pros. Calm down, all right? Don’t take this too seriously. As a fan, don’t expect Hagler-Hearns. Expect two guys who’ve trained really hard, who’ve already fought, who are desperate to win, who are gonna get exposed to the world, in an environment where they’re gonna get put in a ring to fight in front of the world. That’s why I’m so excited about this fight.” 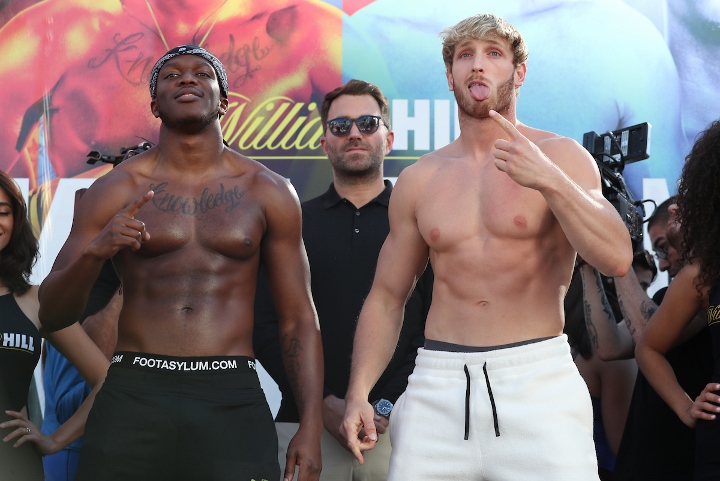 The 24-year-old Paul, of Westlake, Ohio, and the 26-year-old KSI, of Watford, England, have been trained by former WBO heavyweight champion Shannon Briggs and Jeff Mayweather, respectively. They’ll square off 14 months after fighting to a majority draw in a six-round cruiserweight bout at Manchester Arena in Manchester, England.

“These guys can fight a little bit,” Hearn said. “Do you know what I mean? They know how to box a little bit. You know, Logan Paul is actually pretty decent. It’s just I don’t know what kind of engine he’s gonna have for this fight. KSI don’t look great, but he’s at least studied. He’s at least been around boxing for a couple of years. And he’s tried to improve as a fighter.”

[QUOTE=LA_2_Vegas;20179283]Situation like this...my expectations are set really low. It won't be hard to exceed such a low bar, I might end up being entertained. BJS and Haney I want to check out anyway[/QUOTE] The first fight was one of the…

Situation like this...my expectations are set really low. It won't be hard to exceed such a low bar, I might end up being entertained. BJS and Haney I want to check out anyway