Joshua is inching closer to a world title defense against Jarrell Miller, which is slated to take place on a date in June at Madison Square Garden in New York City.

The British star was initially going to fight on April 13th at Wembley Stadium in London - but the date was cancelled after negotiations fell apart with heavyweight rival Dillian Whyte. 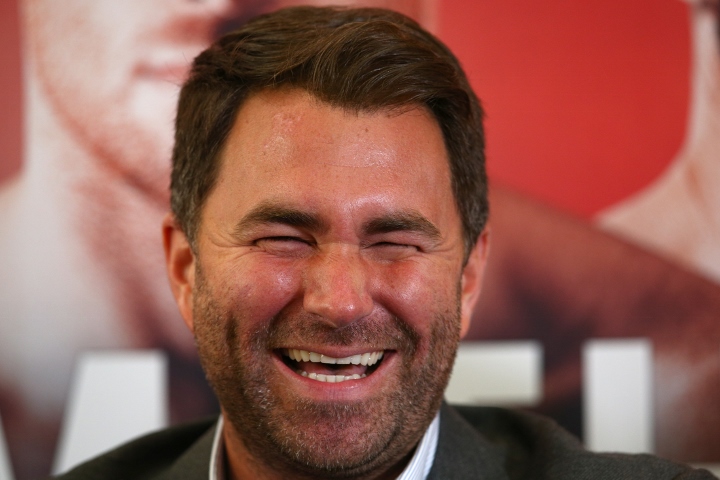 The primary target was Wilder, but the Bronze Bomber is heading into a rematch with Tyson Fury in the coming months. Wilder and Fury fought to a controversial twelve round draw back in December.

During a recent interview with Talk Sport, Wilder mentioned his ability to have at least 2 years of opponents lined up in the event that a deal could not be reached with Joshua.

“Can you imagine if I said that?” Hearn said to IFL TV. “It shows how much he [Wilder] wants to be undisputed though doesn’t it.

“No one asks him the questions. He was in an interview yesterday with Stephen A Smith on ESPN and they went ‘If they Fury fight doesn’t get made, do you think there’s a chance you could fight Anthony Joshua?’ And he went ‘They don’t want it mate, they’re not interested.'

Hearn blames the lack of communication with Wilder - firmly on the boxer's manager, who Hearn affectionately refers to as Shirley Winkle.

"Why didn’t someone say to him ‘Well Eddie Hearn has just said that he sent you six or seven emails to Shirley Winkle and they haven’t replied to one?’ Because that f****r is so arrogant, Shirley Winkle, he won’t even reply to an email," Hearn said.

“And I’ve tried to be nice because he’s said to me ‘Eddie don’t say bad things about me in the media’ but f*** it. He won’t even have the courtesy to reply to an email.”

Lol... Great fight Tank. The brother made it look easy. Something only world class fighters can do.

[QUOTE=Phenom;19498006]It has nothing to do with being soft spoken or being social media savvy people know who really tried to make the fight in September and who didn't (except for minority of you people ) all this back and forth…

[QUOTE=Phenom;19499405]I know you said before you find him to be a handsome bloke and makes you feel funny inside but no one gives a **** about AJ mate wembley don't want him anymore and cancelled his April date Now you…

[QUOTE=The plunger man;19498620]you just cannot handle the fact Joshua is the best heavyweight in the world , he earns more , has more world title belts , has a bigger audience on TV and at his live shows. Recognised by…

[QUOTE=Phenom;19498006]It has nothing to do with being soft spoken or being social media savvy people know who really tried to make the fight in September and who didn't (except for minority of you people ) all this back and forth…