Hearn: Canelo Has 11-Fight Deal, One of Them Will Be Andrade!

Eddie Hearn, promoter of Demetrius Andrade, has assured that his boxer will get a crack at WBC, WBA middleweight champion Saul "Canelo" Alvarez.

Andrade put himself directly in the mix by winning the vacant World Boxing Organization middleweight title with a 12-round unanimous decision over Walter Kautondokwa of Namibia on Saturday night in Boston. 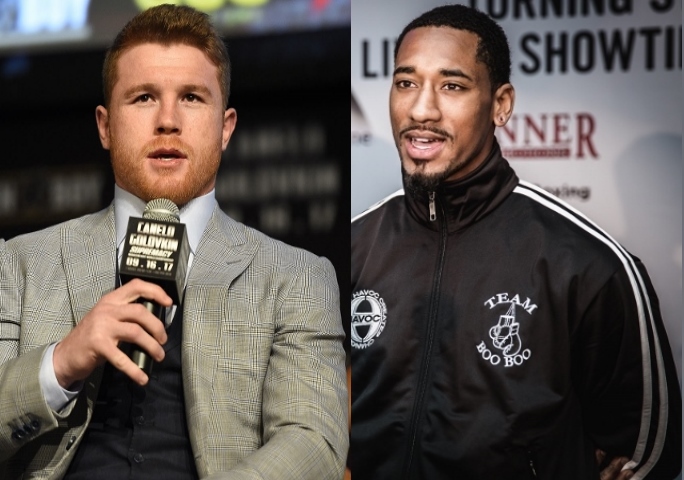 Andrade, of Providence, Rhode Island, previously held in the WBO and World Boxing Association junior middleweight titles. He was also a member of the 2008 US Olympic Team. Kautondokwa, the WBO African middleweight champion, dropped to 17-1 with 16 knockouts.

“I believe after a one-year layoff, my second bout at 160, and the new middleweight champion of the world, Demetrius Andrade! I feel good, I definitely think I carried my power well and we’re just going to keep building and growing for the 160 lb. division and I want to fight the best out there," Andrade said.

“Walter’s a strong tough guy and he can hang in there with the best. We had to make adjustments. I used my boxing ability and everything I was taught and worked on in the gym. He ain’t never been 12 rounds before and I haven’t for a long time…I’m sailing a yacht and we sunk him.

“He kept coming forward and he didn’t show any weakness so I took my time and put my punches together. He was actually getting stronger as the fight went on and I just kept doing what I had to do…kept doing my business and smiling. It’s great baby. Three-time world champion. We made history.”

Kautondokwa, 32, was a replacement for Billy Joe Saunders. Saunders tested positive for oxilofrine, a stimulant, in a drug test administered by the Voluntary Anti-Doping Agency. Saunders vacated his title after the Massachusetts State Athletic Commission declined to give him a license in a hearing on Oct. 9.

Hearn wants Andrade and Canelo to eventually face each other in a unification.

[QUOTE=aboutfkntime;19214977]Floyd fought whoever he wanted he is 100% responsible/accountable for his resume' just like every other fighter [B]EVER[/B] ![/QUOTE] I mean if you want to put it that way then yes but some fighters actually want to hold belts so…

[QUOTE=JcLazyX210;19214410]One Guerrero was a mando that wasn't Floyd pick. Ortiz did 1.25 million. My point Floyd is a ppv powerhouse. Canelo GGG only did 1.1mil. So that was less than Ortiz. My point is Floyd is the biggest draw ever…

[QUOTE=bigdunny1;19212896]Canelo basically signed the same deal but worth a little more then the deal showtime gave Floyd and who ended up picking his fights Floyd or Showtime? Exactly Floyd picked everyone of his fights canelo will be the same. He…

[QUOTE=whoseyourdaddy;19213861]You stupid mother phuker Floyd vs Guerrero, maidana 1&2, Ortiz did only 800k + not to mention the Berto fight 400k so what the F are you talking about?[/QUOTE] One Guerrero was a mando that wasn't Floyd pick. Ortiz did…

[QUOTE=bigdunny1;19213587]And whoever canelo tells DAZN he wants to fight will make money and sell he is the biggest star in the sport you idiot which is why HBO never told canelo who to fight and why DAZN won't either and…