Hearn: Boxing Needs Video Replays, There is No Downside

Eddie Hearn believes the video replays should be used more widely in boxing after Charlie Edwards held on to his WBC flyweight title when Mauricio Sulaiman, the WBC president, unilaterally overturned the result of his title defence against Julio Cesar Martinez.

Martinez floored Edwards in the third round with a barrage of punches, but after Edwards fell to one knee, Martinez walked around him and landed one final, brutal shot to the ribs, that saw Edwards flip over. Incredibly Mark Lyson, the referee who was handling his first world-title fight, did not notice the obvious foul and counted Edwards out.

Martinez was announced the winner, but with the O2 Arena crowd booing and the late punch being played over and over on the big screens above the ring, Sulaiman decided to act, changing the result to a no-contest, ensuring Edwards kept his title. 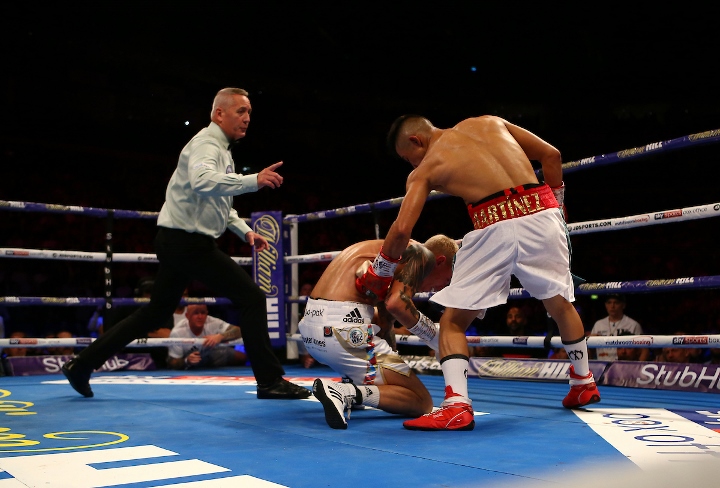 Hearn, Edwards' promoter, agreed with the decision and said that a video assistant referee system could be a huge benefit to the sport to help rid it of miscarriages of justice.

"What's the downside? There is no downside," Hearn said. "It's not as if it is going to slow the game down. That's the problem that people talk about with football and cricket. There's this big controversy. He can't get up. So let’s look at it.

"They look a it very quickly, and they'll rule on it very quickly. And you're given time to recover (if a boxer is fouled). If there's a questionable low blow, for example, and the ref says you're disqualified it allows someone to say, 'hang on, let's just have a look at that.'

"Essentially, it's VAR for boxing, everybody else is doing it. When somebody is fighting for a world title, and it's his livelihood. It is not allowed by the British Boxing Board of Control, but when you've got 12 screens around the ring, you can't ignore it.

"I think Mauricio was great - he said 'I am the president I don’t need to look at this again'. But I've never seen it before.  I think it was completely, 100 per cent, the right thing to do.

"A lot of people said he should have been disqualified. But somebody tweeted me  'Mauricio Sulaiman has gone full Vince McMahon'. "

Having been given his world title back, there is a question about whetjer Edwards will want to defend the title again, having admitted that he "killed himself" making the 112lb limit.

"He's got to look at the weight, anybody who saw him at the weigh-in will know it's getting hard," Hearn said. "It's eight stone, how long can you make eight stone for?

"He's got to decide whether he moves up to super-fly, which is a wonderful division. Martinez is going to be a problem for people, he's a handful. He messed it up for himself, if he'd have been patient, he might have stopped Charlie Edwards legitimately. It was so blatant. It wasn't on the way down, he moved around him to get the shot in."

No thanks, this would solve nothing.

[quote=glenn mcrory;20032247]if [b]the situation was reversed hearn would’ve climbed unto the ring and delivered the late shot himself and burned the replay cameras[/b]. Sulaiman wouldnt have checked them anyways. I saw edwards shattered and broken. That last shot wasnt needed…

[B]"What's the downside? There is no downside," Hearn said[/B] Translation: Replays can get more timeout breaks for AJ to catch his breath when he gases and spits out his mouthpiece.

[QUOTE=factsarenice;20032527]Who are you kidding, you're an Eddie Hearn stalker.[/QUOTE] And you must be a delusional British boxing fan. There is a support group for you guys 1-800-Br-oo-k-is-gre-at. Get help while you still Khan.