Hearn: Andy Ruiz is Tougher Test For Joshua Than Miller Was

Joshua, the WBA, IBF, WBO and IBO world champion, had been scheduled to fight Jarrell Miller but the New York State Athletic Commission refused to sanction the fight after Miller failed a drugs test. 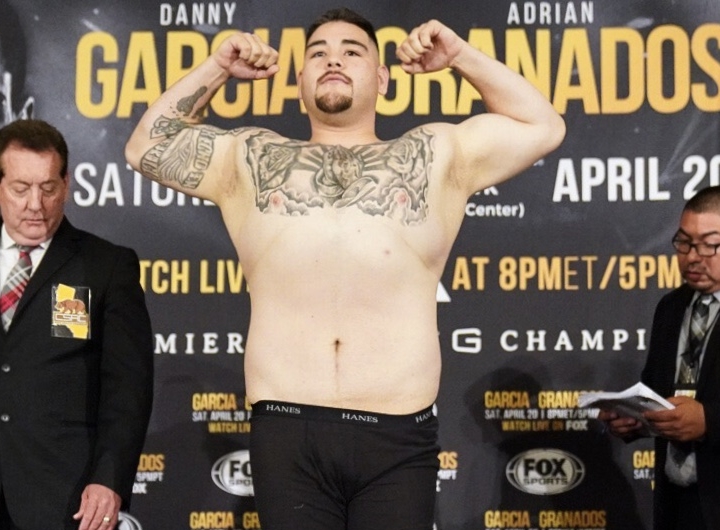 The fight will be 2012 Olympic super-heavyweight champion Joshua's first title bout outside of Britain.

The 29-year-old has a professional record of 22 wins, which includes 21 knockouts.

Ruiz, also 29, has a record of 32 wins, 21 by knockout, and one defeat -- his loss coming in a majority decision against New Zealander Joseph Parker in Auckland in 2016 for the vacant WBO belt.

Parker then lost that title to Joshua in a unanimous points decision in Cardiff in March last year.

Promoter Eddie Hearn said Ruiz, who has looked more paunchy than punchy in some recent photographs, could prove a tougher test than Miller.

“After a tricky week I am delighted to announce Andy Ruiz Jr. as AJ’s opponent for his US debut at MSG on June 1,” said Hearn. “People talk about fighting AJ, some even have to fill their bodies with PEDs to try and beat him up, but very few genuine fighters step up and take the challenge.

“When we selected the opponent, I wanted someone with fire in their heart, someone who genuinely believed that they can win and become world heavyweight champion. Andy showed that desire.

“In my opinion, this is a tougher test than Jarrell Miller. Andy punches harder and is much faster – this is going to be a war. Andy brings Mexican heart but he will meet the best heavyweight in the world on June head on at the Garden. Do not blink!”

[QUOTE=juggernaut666;19707867]Ruiz is a better fighter and carries more pop in his punch then even a 350 pound miller does who is a grinder and relies on work rate to wear guys down and we know where it comes from. Don't…

[B][I]“In my opinion, this is a tougher test than Jarrell Miller. Andy punches harder and is much faster – this is going to be a war." [/I][/B] I believe most of that, except I do not really buy into Ruiz…

[QUOTE=Bronx2245;19707069]If Andy Ruiz is better than Miller, then why did he make the offer to Miller in the first place? Was Miller a mandatory?[/QUOTE] Nah... Miller is an American and could talk some serious trash. He got the gig to…

[QUOTE=Bronx2245;19707493]Hopefully that works for Teofimo Lopez too![/QUOTE] Same here dude. I think that's a awesome match-up. And it seems like Lomachenko is annoyed by him now. Maybe Loma will take it personally and ask for the fight without Lopez getting…