There are two frontrunners being kicked around as the top possibilities to face WBO, IBO, WBA, IBO heavyweight world champion Anthony Joshua on June 1 at Madison Square Garden in New York City.

Once-beaten contenders Andy Ruiz and Michael Hunters are both at the top of the list to challenge the unbeaten champion in his United States debut, which is being carried by DAZN and Sky Sports Box Office.

Joshua was scheduled to face Jarrell Miller - but he was removed from the fight after failing three pre-fight drug tests. After the initial failure, the New York State Athletic Commission refused to license Miller. 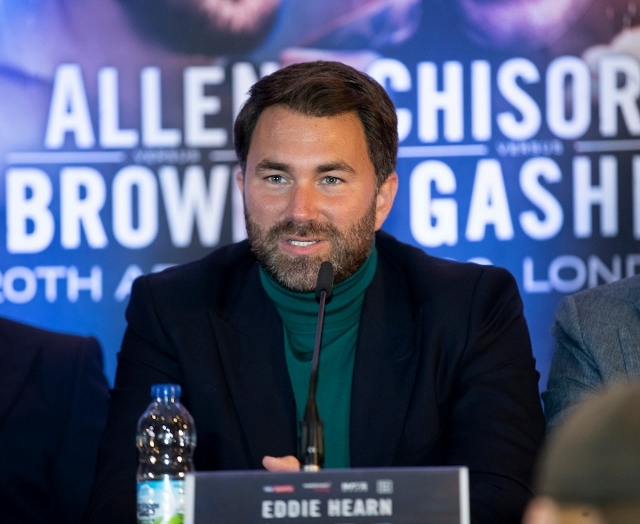 Ruiz was in action last week, when he stopped Alexander Dimitrenko in California.

And Hunter is already in training to fight on May 25 as part of the Usyk-Takam undercard, and he recently signed a promotional agreement with Eddie Hearn, who also promotes Joshua.

“I like Andy Ruiz, I like Michael Hunter, I think they’re two guys who are two credible fights,” Hearn said to BoxingScene.com.

“Ruiz is a character, aesthetically he doesn’t look the best, but he’s a tough bastard, he’s Mexican, he’s got fast hands, he can let his hands go. Michael Hunter is extremely skilled, very difficult to beat. He’s on a great run, could be a massive banana skin.

“There are other guys as well, and I understand that you’re going to get a bumper pay day, but I’ve just seen that it’s all about the money for them, and I’m not even sure they want it. I don’t want that, because this is a big night for Anthony Joshua.

“This is Madison Square Garden, there’s going to be 20,000 people there, we need to make sure this is a real fight. AJ is up for anybody, anybody.”

[QUOTE=THEFRESHBRAWLER;19690295] 0 60 He’s a liar and a signature forger. The judge said it I didn’t. Haha[/QUOTE] Where does it say Eddie forged the signature? Eddie was helping…

[QUOTE=THEFRESHBRAWLER;19692629]you’re a snitching crybaby rat. Go run to the mods like the little girl you are weirdo. Leave me alone before you get your feelings hurt again and start snitching like the bítch you are. You really thought they were…

[QUOTE=LacedUp;19692588]hahaha someone must have lied to you my son. Legal action :lol1: Just remember that I own your life.[/QUOTE] you’re a snitching crybaby rat. Go run to the mods like the little girl you are weirdo. Leave me alone before…

[QUOTE=THEFRESHBRAWLER;19690819]You’re a rat. Are you proud of that snitch? I was told to leave you alone because you because you went and cried to the mods and threatened legal action L-M-A-O a grown man crying to the mods. You REALLY…

[QUOTE=petegrif;19690659]You're wasted on here. You would obviously be a genius promoter. You could set up a fight for AJ with W, F or W in an instant. You'd just flick your fingers and it would be done. ...Right.[/QUOTE]well other promotors…