The ratings for HBO’s third “Super Fly” broadcast were significantly lower than the network’s second telecast that featured 115-pound fighters.

Nielsen Media Research released ratings Tuesday that indicated HBO’s “Boxing After Dark” card Saturday night drew a peak audience of 421,000 during the second of three fights – a 12-round draw between Filipinos Donnie Nietes (41-1-5, 23 KOs) and Aston Palicte (24-2-1, 20 KOs). The Nietes-Palicte fight, which was contested for the vacant WBO super flyweight title, also averaged more viewers (349,000) than opener of that three-bout broadcast and the main event from The Forum in Inglewood, California.

Viewership went down for the main event, Juan Francisco Estrada’s convincing victory over Felipe Orucuta. An average of 298,000 viewers watched that fight, which attracted a peak audience of 329,000. 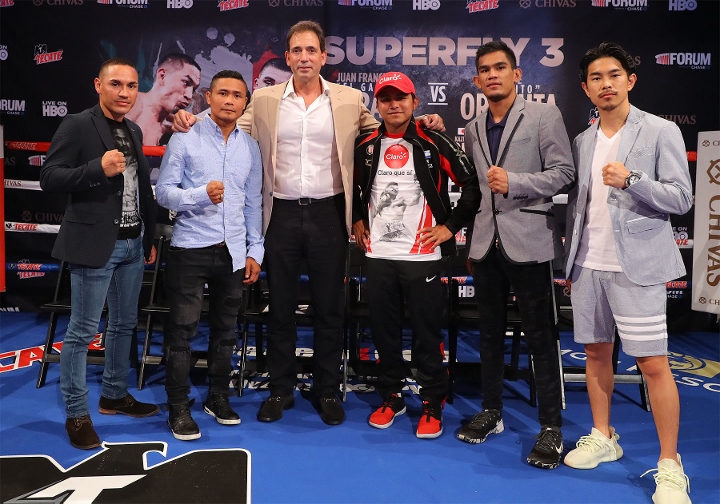 The Estrada-Orucuta fight began at the same time the main event of a competing card on Showtime, Shawn Porter-Danny Garcia, was in its championship rounds. That 12-round welterweight title bout, which Porter won by unanimous decision, drew a peak audience of 690,000 and an average audience of 619,000 from Barclays Center in Brooklyn.

In addition to direct competition for viewers from Showtime’s tripleheader, HBO’s third “Super Fly” broadcast seemingly suffered from neither Roman “Chocolatito” Gonzalez nor Srisaket Sor Rungvisai appearing on it.

The main event of HBO’s previous “Super Fly” telecast attracted a peak audience of 753,000 on February 24, also from The Forum. In that 12-round fight, Thailand’s Sor Rungvisai defeated Estrada by majority decision to retain his WBC super flyweight title.

The first “Super Fly” main event, Sor Rungvisai’s fourth-round knockout of Gonzalez in their immediate rematch, was watched by a peak audience of 835,000 viewers and an average audience of 796,000 a year ago.

That tripleheader benefited from the allure of the second bout between Sor Rungvisai (46-4-1, 41 KOs) and Nicaragua’s Gonzalez (46-2, 38 KOs), who was commonly considered boxing’s pound-for-pound king before Sor Rungvisai scored a controversial majority-decision victory over him in March 2017 at Madison Square Garden.

I don't know why people worry so much about the ratings. Porter vs Garcia did over 600K, this fight was competing with that and a UFC card.

needs better matchmaking. plus i could tell it's pretty low budget compared to the previous superfly events. They have to be consistent with the quality of their content otherwise superfly series will end in a premature death

[QUOTE=1hourRun;19090824]Hell of a show! Casuals missed out on great fights. A lot of girls celebrating the downfall of one of the top division in the sport! How dumb is that? You can tell the real from the fake on these…

Bring boxing back to basic cable!! It's time for this bs to stop.

[QUOTE=ELHITMAN606;19090851]It was a weak ass card with no meaningful fights and all those guys get so under paid it's hilarious[/QUOTE] Agreed. Not judging the sales. Judging the matchups which were not on par w the previous editions. 2 guys I’ve…