DAVID HAYE has promised to retire if he loses his rematch against Tony Bellew.

The former WBA heavyweight champ even said he could hang up his gloves if he does not look good in victory.

Haye meets Bellew in a grudge return showdown on May 5 at the O2 Arena, 14 months after the Liverpudlian former WBC cruiserweight world champion stopped him in the 11th round. 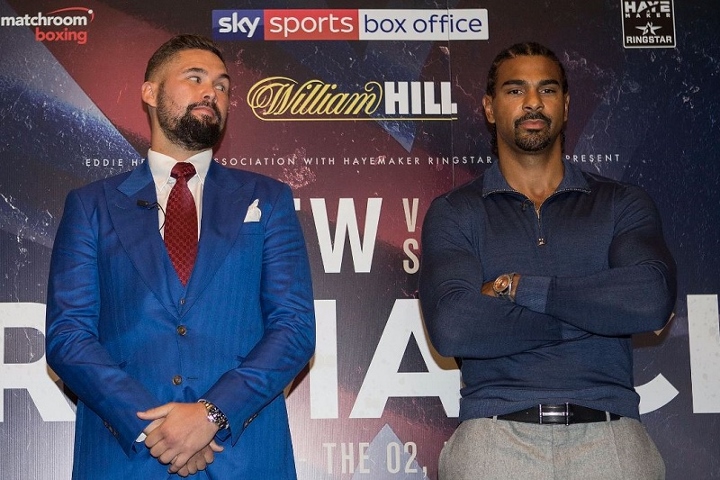 The fight will be exclusively live on Sky Sports Box Office –– but Haye may turn his back on the big paydays and even the ring altogether if the fight doesn’t go as planned.

“[It’s] a cold hard fact. You know, even if I win this fight, but I don't look spectacular, I will retire,” he told Sky Sports recently.

A win for ‘Hayemaker’ could see him target a showdown with world heavyweight champion Anthony Joshua, who extended his unblemished ledger last month as he added the WBO title to the WBA Super, IBO and IBF straps at the Principality Stadium in Cardiff against New Zealand’s Joseph Parker.

“If I've got any type of aspirations to fight some of the big monsters of the division, I’ve got to win this fight and win it well.

“Joshua is up here, three stone bigger, 10 years younger, if I can't dispatch of a Tony Bellew in good form, I've got no business even thinking about fighting for the heavyweight title.”

Bellew, for his part, has insisted that he will produce a repeat performance next month and put an end to David Haye’s illustrious career once and for all.
Joe Joyce set to be in a big fight on the undercard alongside another showing from Joshua Buatsi and John Ryder’s clash against Jamie Cox in the super-middleweight division.

Martin J Ward defends his European super-featherweight title against WBA International champion James Tennyson in what is being described as a world title eliminator, while there is expected to be action for Michael Page and Willy Hutchinson on the same bill as Paul Butler faces Emmanuel Rodriguez for the vacant IBF world bantamweight title.

[QUOTE=MisanthropicNY;18673328]Shut up, coward. You're pu55y. Haye was supposed to retire by 30 and is still fighting. I haven't even seen any confirmation that there is drug testing for this fight. For all I know both of these guys will be…

If David Haye remains uninsured between now and the end of the fight, who genuinely believes he will lose against Bellew? It’s gotta be Haye by stoppage.