The pair of contentious junior middleweight rivals have argued on every imaginable topic ahead of their Dec. 21 title fight rematch, which will air live on Fox from the Toyota Arena (nee Citizens Business Bank Arena) in Ontario, California. The bout comes 52 weeks to the day of their first fight, where Detroit’s Harrison claimed a contested 12-round decision to end Charlos’ 2½ year stay as an unbeaten titlist. 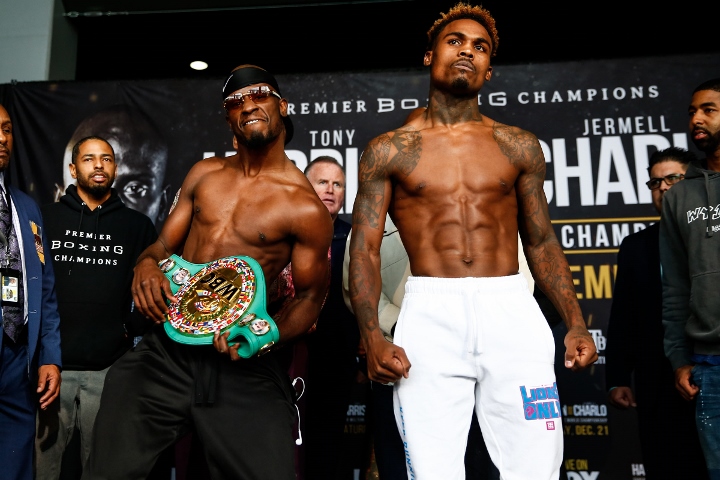 Part two comes six months later than expected, as Harrison suffered an ankle injury forcing him out of their previously scheduled June 23 date in Las Vegas. Charlo (32-1, 16KOs) proceeded with the date, with the former titlist from Houston taking out late replacement Jorge Cota in three rounds.

The insistence on the end of the incoming challenger is to expect a similar outcome on Dec. 21.

“Sleep cold, just like Cota,” Charlo guaranteed when asked for a prediction during their heated PBC Face To Face: Harrison vs. Charlo II segment which aired over the weekend on various Fox Sports platforms. “Just like everyone else you watched me put to sleep.”

His lone career conqueror was quick to point out the math doesn’t support the claim.

As it doesn’t take much to start an argument between the two, Charlo was quick to critique the 21 opponents Harrison has finished off inside the distance.

Technically, that no longer rings true—and Harrison knows it.

“I took that. I took that sh-t,” Harrison reminded his longtime bitter divisional rival. “I beat you, that’s all I care about. I beat you and I’m gonna beat yo’ ass again, 100%!”

When pressed to specify the means of victory, the defending titlist promised an upgrade from the original.

“I am gonna dominate this sucker,” vowed Harrison, who has won four straight since a knockout loss to Jarrett Hurd in his first title attempt nearly three years ago. “Every round I’m gonna dominate him.”

He punished you instead & didn't need 12 rounds LMAO

Man! This is going to be a amazing fight!!! This should do good numbers! Lots of drama for this one! I think because tony pulled out the first fight.. He wasn't ready.. I don't know if he is really ready…

Tonight should be fun. Can't wait to watch it