Harrison: I Was Doing Whatever I Wanted, Breaking Charlo's Will

ONTARIO, California – Tony Harrison felt like he was in control of their rematch before Jermell Charlo knocked him out in the 11th round Saturday night.

That’s one of the primary reasons Harrison was so visibly disappointed after losing the WBC super welterweight title back to Charlo. Harrison survived a second-round knockdown, made the following eight rounds highly competitive and was ahead on one scorecard through 10 rounds (95-94, 93-96, 93-96).

The Detroit native even believes he was demoralizing Charlo at times in the main event of a FOX tripleheader from Toyota Arena.

“I felt like I was doing whatever I really wanted to do before that,” Harrison said during the post-fight press conference. “And I felt like certain parts of the round, I felt like I was starting to break his will. You know what I mean? Because he started to come forward and I told myself like, ‘Look, you tough. You strong. Go for it. Let’s see him fighting on his back foot.’ And I made him do that damn near the whole night. I was catching a lot of his shots, and I pushed forward, man. Ain’t nothing else left to say, man. He earned it. Ain’t nothing else I can really [say]. The guy earned it. He was a champion for a reason. He earned it.” 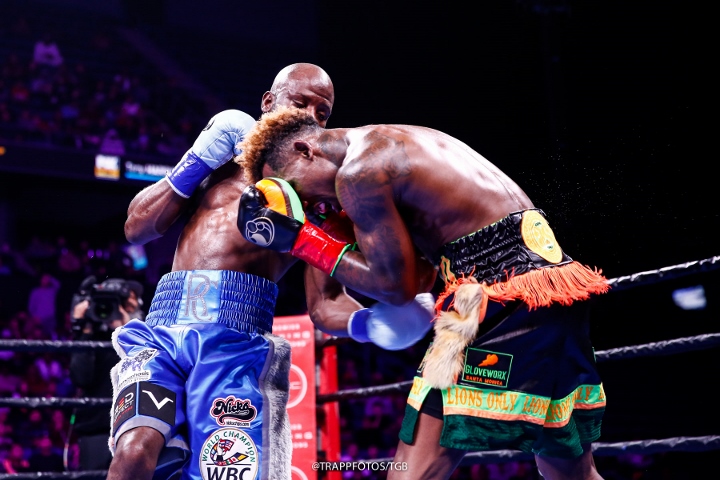 Houston’s Charlo dropped Harrison twice more in the 11th round. The resilient Harrison got up from both knockdowns, but referee Jack Reiss stepped in to stop a vulnerable Harrison from taking unnecessary punishment as Charlo caught him with several power shots.

Charlo, who was slightly more than a 3-1 favorite despite losing their first bout by unanimous decision, feels he showed some different dimensions to his game in the way he beat Harrison.

“I brought out some things,” Charlo said. “I brought out more than just that old-style, walk-down type of fighter. Tony wanted to come forward. ‘Oh, OK. Come forward, so I can set some traps.’ I came forward, backed up, threw some body shots and just tried to do as much as I can to win that fight. I knew it was getting close. I didn’t want it to get close.

“I knew it was some late rounds that he was edging. You know what I mean? And I didn’t want it to be that wicked feeling again. You know what I mean? So, I looked over at my brother, glanced over at him, seen him the only one moving in the crowd at that moment, and he was communicating with me through that twin sh*t. And he was telling me to step it up a little bit.”

Jermell made u his b!tch

Tony got beat and he did it to himself. He talked and talked and talked. Tony couldn’t back it up and if there’s anything I’ve learned about him is that he can’t take a punch and he has no stamina…

[QUOTE=jondacon;20276682]I know many will disagree.. but having watched his reaction to losing.. and the video he made apologizing to Detroit... it didnt seem to be an "angry" upset, like Charlo.. he seemed almost "relieved".. idk, his reaction just seemed odd…

I know many will disagree.. but having watched his reaction to losing.. and the video he made apologizing to Detroit... it didnt seem to be an "angry" upset, like Charlo.. he seemed almost "relieved".. idk, his reaction just seemed odd…

u got your ass beat for talking all that $h1t #LionsOnly