The next edition of Fight Camp is officially set. 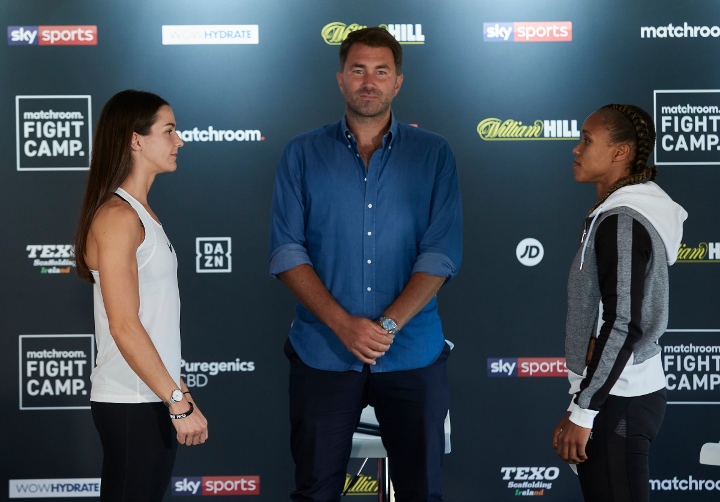 Harper (10-0, 5KOs) claimed the WBC 130-pound strap via 10-round decision over Eva Wahlstrom (23-1-2) this past February in Sheffield, England. The 23-year old from Yorkshire has generated a considerable following in the United Kingdom, although her box office appeal proves moot for the moment as all events in the foreseeable future—including Friday’s show—are denied the benefit of a capacity crowd during the ongoing coronavirus pandemic.

Jonas (9-1, 7KOs) enters her first career title fight. The 36-year old southpaw from Liverpool represented Great Britain in the 2012 London Olympics, where she was ousted by eventual Gold medalist Katie Taylor—now a two-division and reigning Undisputed lightweight champion and pound-for-pound entrant—in the quarterfinal round.

Her pro career hasn’t quite captured the same magic, suffering a 4th round stoppage loss to Viviane Obenauf in August 2018, in one of just two bouts versus an opponent with a winning record. She has since rebounded with three straight wins, including a six-round shutout of Feriche Mashauri last March.

Obeneauf and Mashauri represent two of five common opponents shared between Harper and Jonas; Harper outpointed Obenauf last November on the undercard of Taylor’s 140-pound title win over Christina Linardatou. The bout was Harper’s last before challenging for the title she won earlier this year, with aspirations of becoming undisputed 130-pound champion within the next year. Potentially aiding that goal is the announced Matchroom signing of WBO junior lightweight titlist Ewa Brodnicka, who is very much interested in facing the winner.

Chris Billam-Smith (10-1, 9KOs) weighed 199 ¾ pounds for the first defense of his Commonwealth cruiserweight title versus unbeaten Welsh contender Nathan Thorley (14-0, 6KOs), who also checked in at a fight-ready 199 ¾ pounds;