Super welterweight prospect Hamzah Sheeraz moved to 12-0, as he stopped Guido Nicolas Pitto in the tenth and last round on the Dubois-Joyce bill in Westminster.

The 21-year-old Sheeraz towered over his Argentine opponent and landed plenty of eye-catching shots, but he could not subdue Pitto, who often led off and outworked him. After an impressive start, Sheeraz let the fight drift, before opening up in the last round to force the stoppage. He also retained his “WBO European” belt. 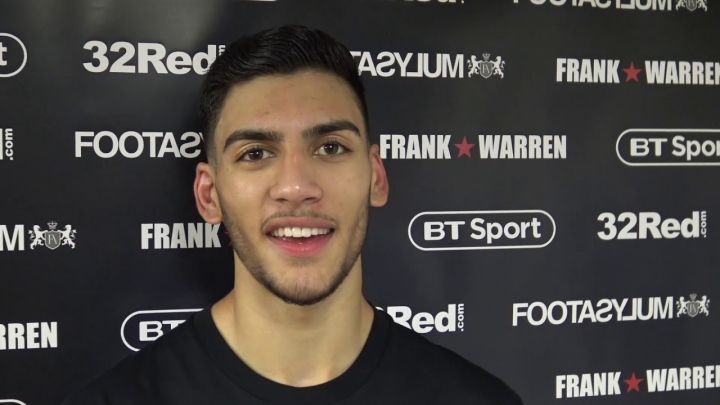 Sheeraz had success in the first round, landing a series of left hooks to the body that had Pitto wincing. Pitto, 33, put Sheeraz under more pressure in the second round, but Sheeraz stayed light on his feet and caught Pitto with his jab.

Pitto tried to put Sheeraz under pressure, but the closer he got, the more risks he had to take and he was rocked by a short uppercut in the third round, having just landed a combination of his own.

After that the fight settled into a pattern, Pitto putting pressure on Sheeraz, who picked his shots well, but never really stepped up through the gears and the fight drifted, Sheeraz at times just moving around and not engaging.

Finally, Sheeraz went for it in the last round, landing two big rights that rocked Pitto back into the ropes and then opening up with both hands, referee John Latham jumping in at 1:11 of the round after a hard right thumped Pinto into the corner post.

[QUOTE=Madison boxing;20914116]very impressive performance[/QUOTE] It was...but it also wasn’t. When he was pushing for the stoppage I noticed all his shots (left and right) were very wide and sweeping....a skilled boxer could have easily dodged and countered. Had it been…