NEW YORK – Christina Hammer doesn’t just view her fight against Claressa Shields as an opportunity to advance her own career.

She sees their 10-round middleweight title unification fight as a chance to change women’s boxing. By showcasing their skills in what figures to be a highly competitive contest Showtime will televise Saturday night, Hammer feels she and Shields can alter the perception of women’s boxing among its critics.

“I think when big TV networks show these fights, they become bigger and bigger,” Hammer told BoxingScene.com recently. “I think times are changing. Now it’s time to show these big fights. And I think the people are very interested because we are totally different persons. I think people are more interested than before. I think it will be a great fight and change the popularity of women’s boxing.” 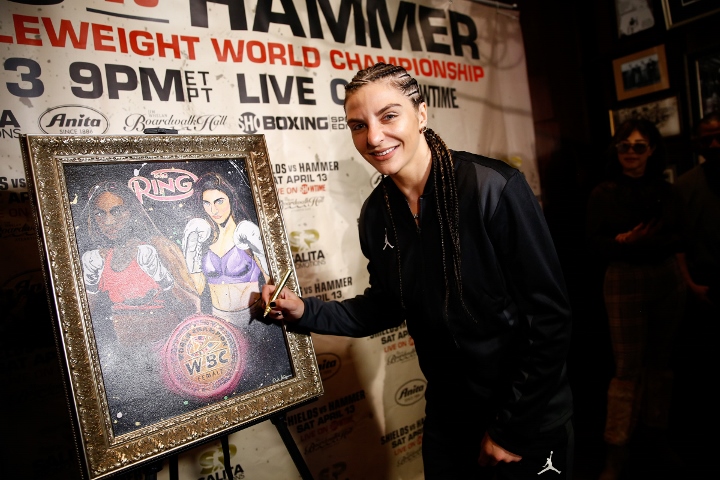 The Hammer-Shields winner will become just the second woman to own at least four recognized world titles simultaneously.

Cecelia Braekhus currently owns the IBF, IBO, WBA, WBC and WBO welterweight titles. Unlike Shields and Hammer, however, Braekhus doesn’t have an unbeaten rival to help her generate this type of interest in one of her fights.

Hammer believes that’s what sets her fight against Shields apart from other women’s matches.

“People, they’re looking forward to seeing a big fight like an Olympic champion and a longtime champion like me,” Hammer said. “They have to get these big fighters in one fight. Every fighter needs a big fight like Canelo and Triple-G. It’s history.”

When asked if Shields represents to her something comparable to what fighting Canelo Alvarez meant to the career of Golovkin, Hammer replied, “Yeah, but I want to win. I will win.”

The 24-year-old Shields (8-0, 2 KOs), a two-time Olympic gold medalist from Flint, Michigan, has been installed as a 4-1 favorite against Germany’s Hammer (24-0, 11 KOs, 1 NC). Their fight for Shields’ IBF, WBA and WBC titles and the 28-year-old Hammer’s WBO championship will headline a “ShoBox: The New Generation” tripleheader from Boardwalk Hall in Atlantic City, New Jersey.

It isn't going to do much for women's boxing TBH. Only reason people are even interested is because it's a unification but more so they wan't to see Shields get her azz kicked since she has a big mouth and…

I'm sure she's wishfully hoping for that & fair play to her in finding motivation in it, but I don't see this changing anything for womens boxing. The fact that Ring Mag is giving the winner its first womens Ring…

Yes.. I'm definitely looking forward to this one.. America all day baby!!! Send her back to Germany or khazastan with zero titles! Lets go shields! Eat her up..

I'm excited for it. Katie Taylor vs Amanda Serrano is another fight that should happen this year that will be big for womens boxing