The 31-year-old Gvozdyk (16-0, 13 KOs) already had overcome a third-round no-call by referee Michael Griffin from a right hand seconds into the period that was ruled a slip, as well as being wobbled by a hard, 10th-round left cross that sent him reeling with only the ropes holding him up.

In addition, however, the 2012 Ukrainian Olympic bronze medalist also trailed, 98-92, and, 96-94, on the cards of Jack Woodburn and Guido Cavalleri, with Mike Ross having it a draw at 95-95 before Griffin rescued a helpless Stevenson crumpled in a neutral corner at the 2:49 mark.

“It’s criminal any time you put a Canadian judge into that spot for a fight like this, the 98-92 score was ludicrous,” said trainer Teddy Atlas, in his first fight with Gvozdyk, regarding the score by Woodburn, who is listed on Boxrec.com as being from Quebec, Canada.

“You might as well just say ahead of time that you’re going in there one card down. Just be honest and say that we’re handicapped, because that’s what you’re doing when you have a judge there from another fighter’s country. It’s like we would have to win every round to get a split-decision.” 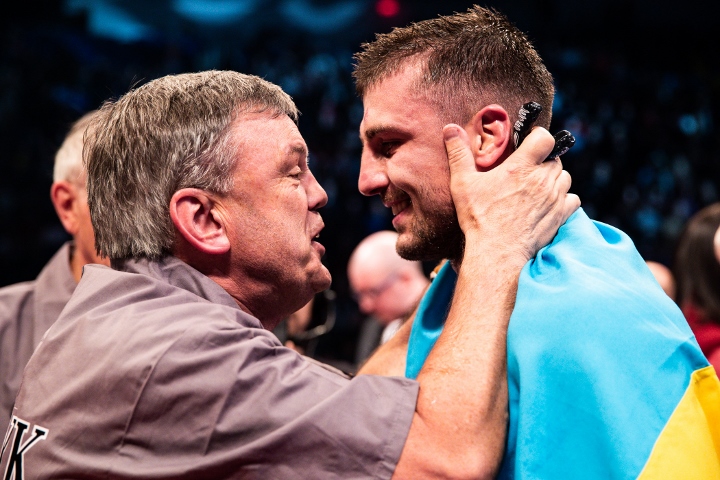 Atlas also had some words regarding the third round knockdown, which Showtime replays showed resulted from Gvozdyk’s right hand.

“I think he’s [Griffin] a fair referee, and an honest referee that tries to do a good job,” said Atlas. “But he just missed it, and you’re not supposed to miss that stuff. He was just in the wrong position, but I don’t think that it was anything like the judge.”

The 6-foot-2 Govozdy’s right hand finished the fight-ending, 10-punch barrage, sinking the 5-foot-11 Stevenson down the ropes and to his backside. The knockout ended the 10th title defense during a run that includes six stoppages for Stevenson, who was transported to a local hospital for precautionary measures and was unavailable for comment.

Fighting out of Oxnard, California, Gvozdyk had earned the WBC’s interim crown in March with a unanimous decision over Mehdi Amar to become Stevenson’s mandatory challenger but ending his streak of eight consecutive stoppage wins.

“This win means everything to me,” said Gvozdyk. “I’ve trained my whole life for this, and tonight, all of the hard work was worth it. Having Teddy Atlas in my corner was a huge help,” said Gvozdyk.

“He knew exactly what to say to me. We trained so well for this fight, and I knew I was going to get the knockout. Adonis was a great champion, but it’s my time, now. I’m ready for anybody else in the division.”

Known for his left-handed “Superman punch,” Stevenson  had gone 16-0-1 with 14 KOs since his lone loss by second-round stoppage to Darnell Boone in April 2010 that he avenged by sixth-round KO in March 2013. Stevenson entered at 9-0-1 with seven KOs in championship bouts, including his title-winning 76-second stoppage of Chad Dawson in June 2013.

Gvozdyk can now accept a rematch, or else, seek unification bouts against counterparts Dmitry Bivol, Eleider Alvarez and Artur Beterbiev, holders of the WBA, WBA and IBF titles.

Bivol (15-0,11 KOs) is coming off a unanimous decision over former champion Jean Pascal on November 24, Alvarez (24-0, 12 KOs) could have a February 2 rematch of his three-knockdown seventh-round knockout that dethroned two-time champion Sergey Kovalev in August, and Beterbiev (13-0, 13 KOs), a defense sometime in February against Joe Smith.

“We were mandatory, we don’t need a rematch. We’re past that, but that’s up to his manager,” said Atlas, referring to Govozdyk’s handler, Egis Klimas. “The manager is going to make that decision, but for me as a trainer, it’s about training. That’s why I came back is to teach and for this kid to reach his full potential.”

[QUOTE=_Rexy_;19319302]Agree or disagree, not in good taste to argue the scorecards when you won, and the guy you beat is in a medically induced coma. And this is coming from someone who has always disliked Adonis. Yeah, those American judges…

[QUOTE=landotter;19321090]Teddy Atlas.... complained about judging??? What a stinking surprise. I sorta remember Mr. Atlas conducting a post fight interview with Jeff Horn after Horn's greatest personal accomplishment and straight up insulting him by saying Horn didn't beat Manny and was…

... facts: in case of a decision, according to the scorecards Stevenson would have retained his WBC belt with at least a majority draw...

Its not boxing that should be banned its the judges, my solution is a simple one, let the people decide, put it to a vote and let us decide...on twitter. :)

Teddy Atlas.... complained about judging??? What a stinking surprise. I sorta remember Mr. Atlas conducting a post fight interview with Jeff Horn after Horn's greatest personal accomplishment and straight up insulting him by saying Horn didn't beat Manny and was…