By process of elimination, Oleksandr Gvozdyk now has a fixed destination in Philadelphia for the first defense of his light heavyweight crown—along with a soon-to-be-official challenger.

The unbeaten 31-year old from Ukraine will put his World light heavyweight championship on the line in the main event of a Top Rank on ESPN show live from the 2300 Arena in Philadelphia, Pennsylvania. Veteran fringe contender Doudou Ngumbu has emerged as the leading candidate to land the fight, although terms are not yet finalized.

The intimate South Philly venue was chosen in part because of its growing reputation as a local boxing hotspot. It became the number one pick after other venues sought were booked on a date which Top Rank remains locked in for the ESPN-televised event. 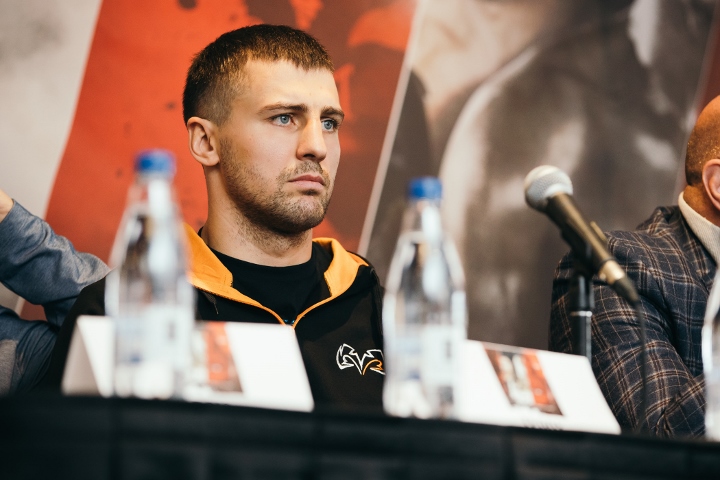 R&B group B2K’s “The Millenium Tour” is booked for the Liacouras Center on March 30, while The Met plays host to comedian Dane Cook’s “Tell It Like It Is” standup tour.

That left the 2300 Arena, which will now get to host three boxing shows in seven weeks, including Raging Babe Events’ sold out “Philly Special” card this Friday.

Gvozdyk (16-0, 13KOs) won the lineal crown—and the World Boxing Council (WBC) title—in an 11th round knockout of long-reigning champ Adonis Stevenson. The bout remains best remembered for its horrific aftermath, with Stevenson being rushed to the hospital and placed in a medically induced coma in order to have emergency brain surgery performed.

The former champ has since awakened from his coma and continues to make progress with each day.

Meanwhile, Gvozdyk—a Bronze medalist for Ukraine in the 2012 London Olympics—will do his best to move on from the tragedy and look to in-ring business lying ahead.

Ngumbu (38-8, 14KOs) emerged as the frontrunner in recent days, with Los Angeles Times’ Lance Pugmire first reporting news of his entering the picture. The Congo-born, France-based light heavyweight—who recently celebrated his 37th birthday—was targeted along with other WBC Top 15-ranked contenders, a prerequisite for any alphabet title defense.

Sweden’s Sven Fornling was once in the running to land the assignment, but never advanced beyond early talks. The perennial Top 10 contender is coming off of a career-best win, a 12-round decision over veteran Karo Murat last December in Germany.

For the time being, he will continue to sit on that win while seeking his next opportunity in hopes of later emerging as a light heavyweight title challenger.

As for Ngumbu, it will be his first crack at a major title, at least for those who don’t recognize the International Boxing Organization [IBO] in the same manner as the WBC, WBA, IBF and WBO. It will also mark just his second stateside appearance, the lone other occasion resulting in a hard-fought Nov. ’14 points loss to Andrzej Fonfara in Chicago.

While better known for losses to Fonfara and Igor Mikhalkin (three) in recent years, he will enter this potential opportunity on the heels of a 12-round win over previously unbeaten Yoann Kongolo last May. A regional title within the WBC organization was at stake, which helped improve his ranking as did his initial title win over then-unbeaten Bilal Laggoune.

Also on the show, unbeaten Christian Mbilli (13-0, 13KOs)—who represented France in the 2016 Rio Olympics—will continue his aggressive sprint in the pro ranks. The 23-year old Frenchman—born in Cameroon but now based in Canada—will make his U.S. debut in a 10-round contest versus former U.S. amateur standout Chris Pearson.

Waiting in the wings for Gvozdyk is Marcus Browne, who scored a landslide points win over a bludgeoned Badou Jack in their 12-round title eliminator last month in Las Vegas. The unbeaten contender from Staten Island, New York was named the mandatory challenger to Gvozdyk’s title with the win.

At the time of the eliminator, Gvozdyk’s team—which includes manager Egis Klimas—filed for and was granted a one-time exemption with the WBC to take on a voluntary title defense prior to honoring the mandatory obligations.

Under normal circumstances, the winner of a title eliminator will not be permitted to take an interim bout once a sanctioning body orders a mandatory title fight.

Given that a voluntary defense for Gvozdyk is already scheduled, Browne (23-0, 16KOs) can pursue a stay-busy bout. However, it would have to be requested in advance with and approved by the WBC and also take place within a specified time frame as to not delay plans for the eventually ordered championship fight itself.

Gvozdyk facing the killers! LHW division moving so slowly, I want to see the big boys face each other

The opponent sucks but it's rare to see someone fight 3 top opponents in a year anyway. Gvozdyk just had one 3 months ago, he will probably have another only 4 months after this fight. Not much to complain about.

Smart move- hopefully a big fight is next. Dangerous division

I'm betting Teddy Atlas had something to do with the choice of opponent. Maybe he thinks Gvozdyk needs a soft touch after nearly killing/making Adonis a vegetable

If the Browne fight happens next, I'm okay with this one. Gets to stay active after fighting Stevenson in December. The opponent obviously is poor, but it is what it is. Fight Browne, and if he wins, get a unification…