Gvozdyk Paying No Attention To Amateur Setback To Beterbiev

WBC light heavyweight champion Oleksandr Gvozdyk (17-0, 14 KOs) of Ukraine will face the toughest opponent of his pro career, when on October 18th he collides in a unification with amateur rival, IBF champion Artur Beterbiev (14-0, 14 KOs) of Russia.

The two boxers first met in the ring a decade ago, in the amateur ranks, with Beterbiev securing a stoppage in the second round.

"He is a strong fighter. He's a stylish boxer with rich amateur experience. I'm in the prime of my life. I can respond to him extremely well. This is a serious athlete and a serious challenge for me," Gvozdyk told Alexander Pavlov. 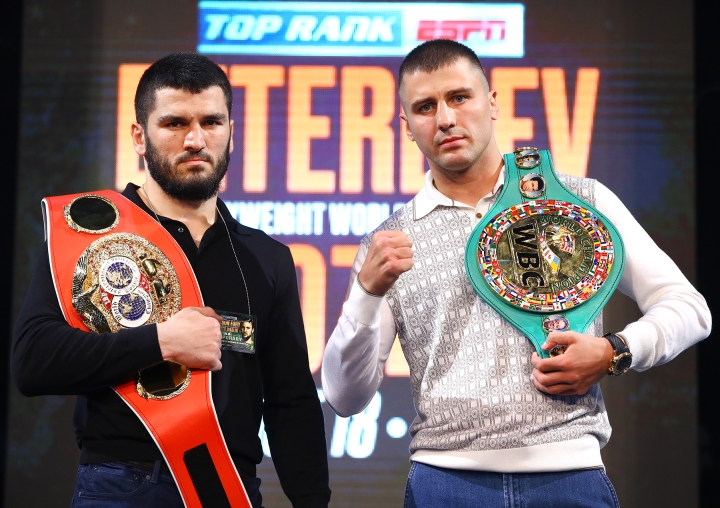 Gvozdyk explained that he was very inexperienced when he faced Beterviev in the amateur ranks.

"In 2009, I lost to him at a tournament in Turkey - my nose started to bleed. The fight was stopped in the second round. I went into that fight with a broken nose. For me, this was the first trip with the national team, and Beterbiev was already a great amateur champion. But that was ten years ago. Today both of us are different boxers. We'll see," Gvozdyk said.

"They threw me in there like a victim into a tiger's cage. Objectively speaking, I was not ready for that fight - neither mentally nor physically. Plus, ten days before him, my nose was broken - I did not train and did not intend to box at all. They asked to go out for this, to gain further experience. I perfectly understand who I have to face now. This is a serious puncher. We will fight."

Gvozdyk is training for this fight with Hall of Famer Teddy Atlas, who is very strict and tough with his fighters.

"Our communication does not cause me a lot of difficulty. If you had to eat very spicy food, you would have to make an effort to do this. But if you were an Indian, you would just eat and enjoy. I have no problems with Teddy, I behave as usual. I do not need to play and adjust. It’s enough just to work, find a common language. In the initial stages, it was hard with some things - one way or another, he changes you in terms of some technical aspects that he sees differently. Now I'm comfortable with him," Gvozdyk said.

Teddy Atlas the spiciest trainer LOL I will be in attendance; can't wait!

I think Beterbiev wins by TKO. Gvozdyk could pull it off if he able to avoid exchanges and close distance but I doubt it possible with Beterbiev he is a monster in this division. Raw power and solid technique. The…

The more I have come back to this fight, the more I have a good feeling about Gvozdyk. I can see a split decision here, and I think Gvozdyk scores enough huge hits to keep Beterbiev away from him and…

[QUOTE=_Rexy_;20109433]That was poorly reffed and poorly judged. I had Nail up at the time of the KO Not to mention that the ref ruled an obvious KD a slip. But you know I’m team Beterbiev lol[/QUOTE] You damn right your…