Gvozdyk Knocks Adonis Stevenson Out in Eleven For WBC Title

Stevenson vowed to put WBC 175-pound title challenger Oleksander Govzdyk’s “body on the canvas,” but  the 41-year-old was instead hammered into submission by “The Nail” and left crumpled in a neutral corner after a 10-punch barrage at the 2:49-mark of the 11th round. 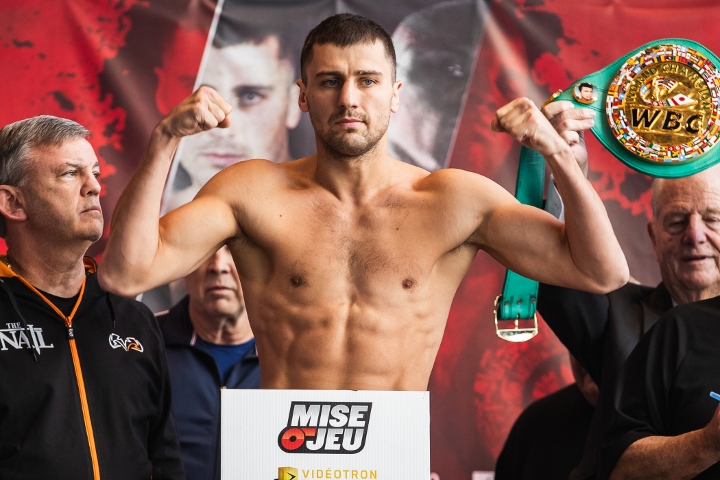 Gvozdyk (16-0, 13 KOs) overcame a no-call on a third-round knockdown  in his favor and survived a 10th-round left hand that wobbled him into the ropes to earn his ninth knockout in 10 fights to dethrone Stevenson (29-2-1, 24 KOs).

Govozdy’s right hand ended the fight-ending, 10-punch barrage  that folded Stevenson in on his backside,  the knockout ending “Superman’s” sovereignty as boxing’s oldest and longest reigning champion and a 10th title defense that includes six stoppages during that period.

“This win means everything to me,” said Gvozdyk. “I’ve trained my whole life for this, and tonight, all of the hard work was worth it.”

Stevenson was transported to a local hospital for precautionary measures and was unavaible for comment.

In the 6-foot-2 Gvozdyk, the 5-foot-11 Stevenson succumbed to a 31-year-old Ukrainian 2012 Olympic bronze medalist fighting out of Oxnard, California, and working in his first fight with trainer and commentator, Teddy Atlas, having earned the WBC’s interim crown in March with a unanimous decision over Mehdi Amar that ended his streak of eight consecutive stoppage wins.

“Having Teddy Atlas in my corner was a huge help,” said Gvozdyk. “He knew exactly what to say to me. We trained so well for this fight, and I knew I was going to get the knockout.”

A slightly-favored mandatory challenger and technical counter-puncher, Gvozdyk maintained a tight defense, read and timed Stevenson’s pulverizing power punch and wasn’t very long a susceptible, stationary target for direct, line-of-fire, clean or flush concussive blows. In addition, Gvozdyk landed combinations rather than single-shots, while keeping Stevenson off balance with his jab and movement.

In the first round, Gvozdyk measured his jab and displayed circular mobility against Stevenson’s pressure. The champion landed a left with about 90 seconds left, and three more in the final 15. In the second, a seemingly tight Gvozdyk took another early left, and then another to the nose near the two-minute mark as well as two more in the last 10 seconds.

Stevenson hit the deck from a ruled slip early in the third, although replays showed Gvozdyk had landed a clean, counter-right hand that lifted Stevenson off his feet. The champion recovered and resumed his left-handed attack, although Gvozdyk drew closer appearing to develop a confident rhythm behind snapping jab and counter-right.

With Gvozdyk back on the outside in the fourth, Stevenson appeared to regain the advantage being busier and landing his left. But Gvozdyk began to out-work him with combinations, including a right to the body and a counter right hand over a Stevenson left and a right to the champion’s jaw at the bell.

Circling left away from Stevenson’s power in the fifth, Gvozdyk  more deliberately searched for the right-hand counter, two of which landed with about a minute left in the round. Stevenson stumbled backward from a right and a left-right combination at the 45-second mark in another effective round for Gvozdyk.

Gvozdyk connected with a right to the chest early in the sixth, but Stevenson answered several more three left hands before Gvozdyk got his attention with a right hand with a minute left. Gvozdyk owned dthe final 30 seconds of the round, firing at least three right hands over as many jabs.

Gvozdyk picked up where he left off in the seventh, being sharper and busier from the outside, scoring  with cleanly-landed three- and four-punch combinations as Stevenson tried to load up. Gvozdyk sandwiched a pair of hard right hands around a Stevenson body shot in the final 10 seconds.

The eighth and ninth were more of the same, Gvozdyk getting off first and generally out-working Stevenson. Near the two-minute mark of the eighth, Govzdyk stepped up the pressure, backing up Stevenson and finding a permanent home for his right hand-left hook combinations.

Stevenson’s best moment came midway through the 10th, a head-swiveling left hand to the jaw wobbling Gvozdyk into the ropes, which were all that kept the Ukrainian him on his feet. Gvozdyk was able to clinch and survive the round, even bobbling the champion’s head with a five-punch combination just before the bell.

In the 11th, as Stevenson searched for the finishing blow only to met with a 10-punch volley that ended with him holding on for dear life. A subsequent six-punch volley forced Stevenson into a neutral corner, where Gvozdyk followed and finished him off.

Gvozdyk’s resume includes knockouts of title challengers Isaac Chilemba and southpaw Tommy Karpency in the eighth and sixth rounds in November and July 2016. Chilemba’s gone the distance in losing majority and unanimous decisions to current WBO titleholder Eleider Alvarez and former champion Sergey Kovalev, while Stevenson scored a third-round stoppage of Karpency, who floored Gvozdyk in the first round.

Gvozdyk can now accept a rematch, or else, seek unification bouts against counterparts Dmitry Bivol, Eleider Alvarez and Artur Beterbiev, holders of the WBA, WBA and IBF titles.

Bivol (15-0,11 KOs) is coming off a unanimous decision over former champion Jean Pascal on November 24, Alvarez (24-0, 12 KOs) could have a February 2 rematch of his three-knockdown seventh-round knockout that dethroned two-time champion Sergey Kovalev in August, and Beterbiev (13-0, 13 KOs), a defense sometime in February against Joe Smith.

“Adonis was a great champion,” said Gvozdyk. “But it’s my time, now. I’m ready for anybody else in the division.”

Known for his left-handed “Superman punch,” Stevenson  had gone 16-0-1 with 14 KOs since his lone loss by second-round stoppage to Darnell Boone in April 2010 that he avenged by sixth-round KO in March 2013. Stevenson entered at 9-0-1 with seven KOs in championship bouts, including his title-winning 76-second stoppage of Chad Dawson in June 2013.

[QUOTE=chrisJS;19332916]You are talking to a guy who said Lomachenko isn't a top 500 at 135 and that Linares would destroy him and claimed Linares won and same with Rigo. Funny thing is before Loma signed to fight Rigo he rated…

[QUOTE=Vlad_;19332557]Usyk and Gvozdyk are stiff? Just because they don’t do flashy useless moves, that doesn’t make them stiff. They have excellent footwork, and are always on the move. Not flashy does not mean stiff.[/QUOTE] You are talking to a guy…

[QUOTE=Vlad_;19332557]Usyk and Gvozdyk are stiff? Just because they don’t do flashy useless moves, that doesn’t make them stiff. They have excellent footwork, and are always on the move. Not flashy does not mean stiff.[/QUOTE] Wow are you really trying to…

[QUOTE=kidbazooka;19332471]Look at em Only Loma moves with real fluidity and skill the rest of the guys look stiff as fuccckk[/QUOTE] Usyk and Gvozdyk are stiff? Just because they don’t do flashy useless moves, that doesn’t make them stiff. They have…

[QUOTE=Vlad_;19332352]Hahaha wow are you a moron. You’re on your own level of mental disability.[/QUOTE] Look at em Only Loma moves with real fluidity and skill the rest of the guys look stiff as fuccckk