If Joshua Greer Jr. had the final say, he would be preparing to fight a different Filipino opponent Tuesday night.

The 23-year-old Plania appears to be a high-risk, low-reward foe for Greer, who is the WBO’s number one contender for Casimero’s 118-pound title. Chicago’s Greer (22-1-1, 12 KOs) and the Philippines’ Plania (23-1, 12 KOs), who ordinarily competes at the junior featherweight limit of 122 pounds, will box at a contracted catch weight of 120 pounds.

“If it was up to me, me and Casimero would be fighting now,” Greer told BoxingScene.com. “So, it’s really up to his people. When I heard that there was a possibility I could fight Casimero [on Tuesday night], I was all for it. It’s all up to Sean Gibbons [Casimero’s adviser] and Manny Pacquiao Promotions. It’s up to them guys over there.” 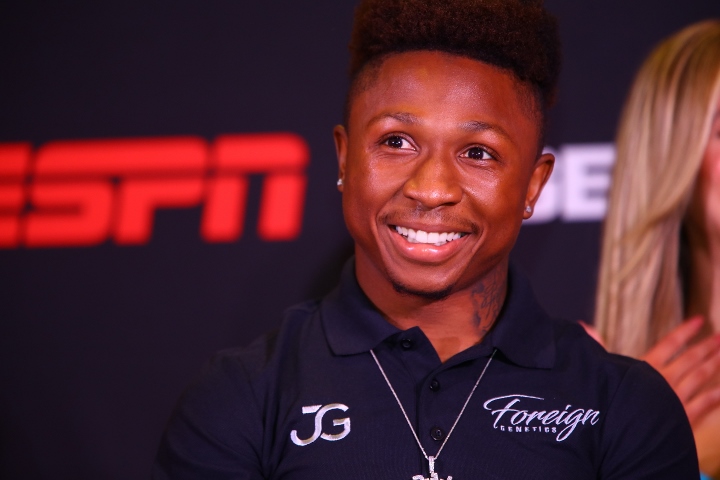 Greer was scheduled to square off against Australia’s Jason Moloney on the Inoue-Casimero undercard. Moloney is the WBO’s second-ranked challenger for Casimero’s championship.

Matchmakers for Bob Arum’s Top Rank Inc. sought a different opponent for Greer’s rescheduled bout because when they were putting together Tuesday’s card Jason Moloney and his twin brother, Andrew, hadn’t been cleared to return to the United States. Jason Moloney (20-1, 17 KOs), who since has arrived in the U.S., is set to headline another ESPN show June 25 at MGM Grand Conference Center.

Jason Moloney will meet Mexico’s Leonardo Baez (18-2, 9 KOs, 1 NC), who replaced Colombia’s Oscar Negrete (19-2-2, 7 KOs) as Moloney’s opponent over the weekend, in a 10-round bantamweight bout. Negrete withdrew from the Moloney match after suffering an eye injury while training.

Casimero remained in Las Vegas during the pandemic, thus getting him back into the country isn’t an issue. Inoue, however, still cannot enter the U.S. from Japan due to COVID-19 travel restrictions, which could lead to Casimero attempting another title defense before their handlers can revisit the Inoue fight.

The 26-year-old Greer also is the IBF’s second-ranked challenger for Inoue’s title.

“Bob Arum mentioned [me fighting Casimero], but it is what it is,” Greer said. “I’m focused on Mike Plania right now. He’s in the way, and that’s who I’m looking forward to fighting [Tuesday night]. I wanna show people June 16th why I’m the number one-ranked bantamweight and why I’m looking to be champion. You can’t mention Inoue or Casimero, or the bantamweight division, without mentioning Joshua Greer Jr.

“When I win this fight, it’s all gonna be in the hands of James Prince [Greer’s manager] and Bob Arum and Top Rank. I wanna get to the top no matter who I’ve gotta go through. It’s nobody specific. I wanna be a world champion. That’s the goal for me, so whoever’s in the way of that, I’m willing to go through him and get my belt.”