Greer Gets Past Potapov In Boring Bantamweight Eliminator

The bantamweight contender, known for offering pillows to opponents he plans to knock out, boxed his way to an unusually dull, 12-round, majority-decision win over Nikolai Potapov at Prudential Center. The competitive but boring bout forced fans to voice their displeasure several times as Greer and Potapov tactically tried to figure one another out.

The crowd erupted seemingly in mock applause after the final bell sounded for a fight ESPN aired as part of the Shakur Stevenson-Alberto Guevara undercard. 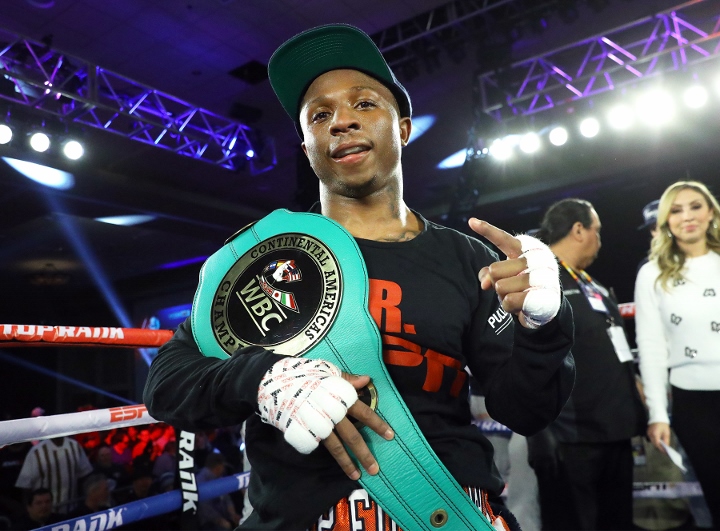 “We feel we got robbed, as do boxing fans,” Salita said. “ESPN and the media had Nikolai winning. We are going to appeal the decision. ESPN is a great platform for the sport of boxing. We are grateful for the opportunity and what is just. Nikolai won the fight!”

Salita’s statements and the lack of action aside, Chicago’s Greer (21-1-1, 12 KOs) won his 18th straight fight. He hasn’t lost since dropping a four-round majority decision to Stephen Fulton in December 2015.

“He’s very awkward with the Russian style,” Greer said. “But at the end of the day, this is the pros. I pulled it out. … The booing didn’t both me. I know I won the fight. Every time I hit him to the body, I hurt him. I didn’t get the knockout, but I got the win. Next time out, you’ll see the pillow again.”

Greer had beaten seven consecutive opponents by knockout or technical knockout before going the distance with Potapov.

The Russian-born Potapov (20-2-1, 18 KOs), a Brooklyn resident, lost for the second time in five fights. He had won three straight bouts after Omar Narvaez stopped him after seven rounds in October 2017 in Buenos Aires, Argentina.

This victory in an IBF bantamweight elimination match will move Greer closer to a shot at the IBF’s 118-pound champion, Japan’s Naoya Inoue. He’s ranked No. 4 in the IBF’s rankings, seven spots above Potapov.

Neither fighter appeared to push for a knockout in the 12th round, despite that the fight appeared up for grabs heading into those final three minutes.

Potapov and Greer traded hard head shots early in the 11th round. Greer slowed down Potapov with a left to his body in the second half of the 10th round.

Potapov caught Greer with a short, overhand right just before the halfway point of the sixth round. Several seconds later, some in the restless crowd booed because there wasn’t enough action.

The action picked up a little bit late in the fifth round, right after fans began booing for the first time.

Greer landed a hard left to Potapov’s body late in the third round, but otherwise was having trouble landing clean shots on Potapov.

Vargas hurt Lopez with a right uppercut during an exciting exchange late in the seventh round. He attacked Lopez as Lopez backed against the ropes and unloaded power punches on him.

Referee Sparkle Lee stepped in to protect Lopez and stopped their fight at 2:50 of the seventh round.

This fight is a perfect example of how even as good of boxer's Ward and Bradley were. They are terrible at commentating. They seem more like haters. Greer wasn't impressive by any means but he def wasn't losing to Potapov.…

[QUOTE=RGJTMMRDCMJRJSM;19899685]I know right?? Dasmarinas is already the ibf mandatory for Inoue. Wtf is this for? What ibf eliminator? It's not even listed as an ibf eliminator at boxrec while the one with dasmarinas is listed.[/QUOTE] The IBF has eliminators just…

'Night Night' Greer lived up to his nickname, he put everyone to sleep tonight.

Very close fight but I had Joshua Greer edging it out