Had the 2008 U.S. Olympian simply taken his professional career more seriously, he wouldn’t have found himself working grueling graveyard shifts at a grocery chain’s warehouse in City of Commerce, California, two years ago. During one of those 10-hour shifts at his first “real job,” Molina could only watch parts of the Vasiliy Lomachenko-Jose Pedraza fight on his phone in December 2018.

Molina’s fast-paced position as an order selector left little time to watch boxing. The Norwalk native had even less time and energy to train, which made Molina think at times that his boxing career was over at the age of 28.

“I had to man up,” Molina told BoxingScene.com. “I had to do what I had to do. I understood that I put myself in that position, that it was my own fault. That was the price that I had to pay. But every day I would walk into that warehouse, I had the same thoughts in my head. I was like, ‘Man, I shouldn’t be here. What am I doing?’

“But I had to man up and pay the bills. I had a baby girl and boxing wasn’t doing it. I put myself in that position when I had other opportunities, when I could’ve stepped up in the sport. But because of my lack of discipline, I had to pay for it. That’s the way it is. Fortunately, I had people who cared about me and always believed in me. Thanks to them, I feel like that’s why I’m here.”

By here, Molina means Las Vegas, where less than two years after watching Lomachenko-Pedraza on his phone inside a warehouse, he’ll oppose Pedraza in a high-stakes, 10-round fight that could move Molina closer to a junior welterweight world title shot. The 30-year-old Molina has won five consecutive fights since newly crowned WBA interim welterweight champ Jamal James beat him by unanimous decision in January 2016.

In his most recent appearance, Molina (22-2, 9 KOs) soundly defeated 140-pound contender Amir Imam (22-3, 19 KOs) by unanimous decision in an eight-rounder on the Tyson Fury-Deontay Wilder undercard February 22 at MGM Grand Garden Arena in Las Vegas. Molina is 4-0 since signing with Bob Arum’s Top Rank Inc., which enabled him to quit his job at Smart & Final early in 2019.

“You have to give him a lot of credit,” said Carl Moretti, Top Rank’s vice president of boxing operations. “He has really come back and proved it in the ring, and he’s now in with another legitimate contender at 140. If he keeps on this streak, who knows? You could see him having a very interesting 2021 should he get through Pedraza because of all the opportunities at 140.” 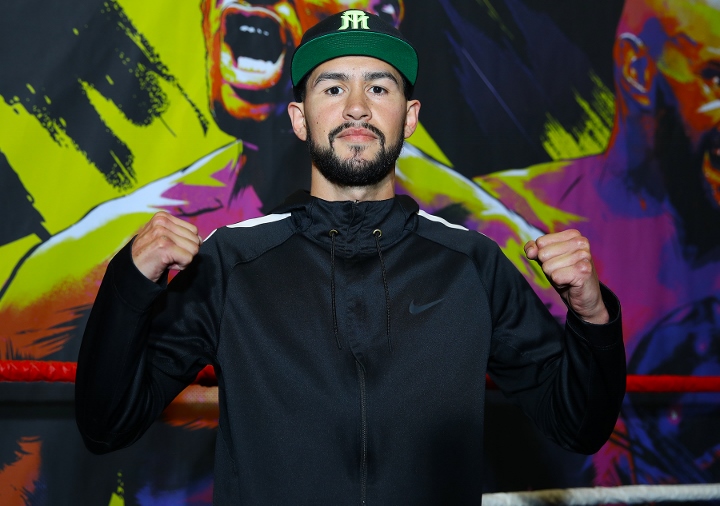 The 31-year-old Pedraza (27-3, 13 KOs), a two-weight world champion from Puerto Rico, impressively picked apart Mikkel LesPierre in his last fight. Pedraza dropped Brooklyn’s LesPierre (22-2-1, 10 KOs) once apiece in the fifth and 10th rounds on his way to a lopsided points win July 2 at MGM Grand Conference Center, where the Pedraza-Molina match will headline a nine-fight card ESPN+ will stream, starting at 7:30 p.m. ET/4:30 p.m. PT.

Neither Pedraza nor Molina is ranked in the top 15 by the IBF, WBA, WBC or WBO. Headlining an event on an ESPN platform represents remarkable progress for Molina, however, especially since he has come so far in such a short time.

“I felt like I should’ve been in this position years ago,” Molina said. “But unfortunately for me, I had discipline issues and I was fighting in a heavier weight class because of that. And then, ever since I went back with my coach – I’ve had my last four fights with my amateur coach – and I think things have been rolling good. I got back down to 140.

“I think I should’ve started my career at 135 and moved up to 140. But because of my lack of discipline, I was fighting at 147 and the results of that were I took two losses. But it’s fine. I feel like right now we’re in the perfect position to take advantage of beating Pedraza and taking over the 140-pound division.”

The younger brother of retired junior welterweight Carlos Molina and the twin brother of Oscar Molina, a junior middleweight who also retired, Javier Molina attributes much of his turnaround to reuniting with trainer Roberto Luna last year.

Molina began boxing under Luna’s tutelage when he was 9. Luna trained Molina for his first five professional bouts, but he had stints with two other trainers before returning to Luna.

“I just feel like I’m a completely different fighter when I’m with him,” Molina admitted. “I’ve always had trust in him. When we’re in the ring, I’m not alone. We just work well together.”

The motivated Molina wants to repay Luna, his parents, Miguel and Gloria Molina, and his brothers for always believing he could accomplish professionally what he set out to do following a tremendous amateur career. His girlfriend, Isabelle Carrillo, also is pregnant with their second daughter.

“I just feel like I can’t let anybody down,” Molina said. “I’ve just gotta keep working. I know what we’re doing right now is working. We’ve just gotta keep it going and soon we’ll get that title shot. That would mean a lot. I’ve gone through a lot of ups and downs, so getting a fight like that and winning a world title, I know the feeling will be much sweeter now than before because of everything I’ve been through. There was times in my career when I questioned if I was gonna continue to fight. When I had the 2½-year layoff, I mean, to be in the position I’m in now, I’ve just gotta take full advantage of it. I got a second chance, so there’s no looking back now.”

never heard of this guy.

I dont know why more young men in his position dont join the Reserves.

Win or lose he's done well to get back into the sport and give it his best effort, interested in seeing how the fight goes as Pedraza is a good fighter but not elite especially at 140

A US Olympian? That tells me he can fight and knows his way around the ring. Whether you make it in this thankless business depends sooo much on where your head and heart is. Wishing him the best.