Granados Pumped To Be Back at 140, Confident of Beating Easter

Former world champion Robert Easter Jr. and all-action veteran Adrian "El Tigre" Granados will go toe-to-toe this Saturday, October 26 in a crucial super lightweight showdown as both fighters look to insert themselves into the title picture with a win live on SHOWTIME from Santander Arena in Reading, Pa.

"I want to be the top dog at 140 pounds," said Easter. "I have to go after those guys that have the belts in this division. It doesn't matter to me who I fight. I just have to fight the best and to me all the belts in the division are up for grabs."

"Beating Easter would definitely bring me back to championship contender status," said Granados. "I feel like everything is on the line in this fight. I'm treating this as if my back is against the wall. Easter being a former champ would elevate me for sure, and a win against him would go a long way." 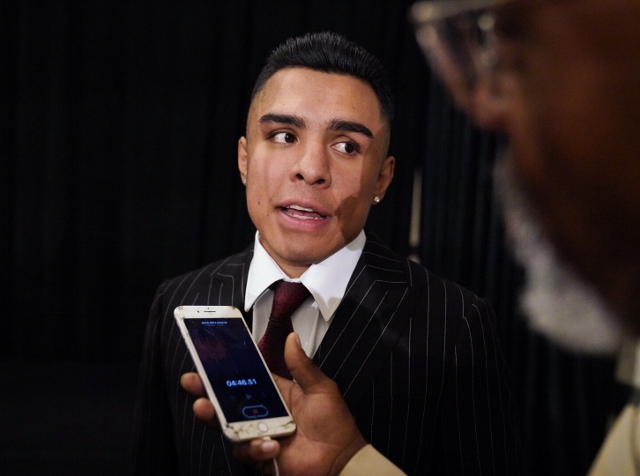 The weight for this fight is of particular note for both fighters as Easter, a former lightweight champion, will make his super lightweight debut and Granados will move back down after suffering defeats to the 147-pound elite. Both believe big improvements could be in-store because of the weight.

"I felt it was time to make the move up and explore a higher weight class," said Easter. "Making 135 pounds wasn't that hard for me, but I was taking off too much muscle to make that weight. Now I'll definitely have more power and be better hydrated. I'll feel much more comfortable heading into the fight and inside the ring.

"I know that the guys I'm facing in this weight class will be stronger too, so we've been working a lot with my strength and conditioning coach. We're doing lots of legs and upper body drills. I'm focusing on staying strong, as well as keeping the cardio up."

With Easter bringing his slick boxing style and top flight speed to the table, and Granados being known as a come-forward fighter who never lets his opponent rest, the winner could be determined by which fighter is able to impose their will and adjust as the fight progresses.

"Granados will come to fight," said Easter. "I know that. I'll try to use my boxing skills and not just stand there banging with him, but you never know how it'll play out until we actually get in the ring. You can't really put together a blueprint. I'll just have to adjust to whatever style he brings to the table on October 26.

"Granados is a tough fighter, and I've had a plenty of tough fights, but he's been in there with some great fighters. I know he'll test me, but I'm ready for whatever he throws at me. I'm training really hard for this one."

"I think this fight is a classic boxer versus puncher-brawler," said Granados. "I am going to apply the pressure and I'm going to come out to take this one from him. I think Robert is a tough, good fighter, but I've been in there with lots of elite fighters.

"I'm excited to be back at my natural weight. I know that he's the taller, longer fighter, but I'm not much shorter than him and I know that I have what it takes to beat him when I'm at my best."

Tickets for the event, which is promoted by TGB Promotions and King's Promotions, are on sale now and can be purchased through Ticketmaster.com or at the Santander box office (Monday-Friday, 10 a.m. - 5 p.m., Saturdays 10 a.m. - 2 p.m.).

Never a good idea to move back down after competing at a higher weight for so long. Especially at an older age. Granados has made plenty of money at this point, probably more than he ever thought. If he loses…

Well at least he can say, "Al Haymon paid me well to get my ass kicked."

I'll be rooting for Granados.. kid comes to fight and dodges NO challenge. Easter disappointed me in his last fight.

How much does Granados have left after that beating he sustained against Danny. He has also had his fair share of wars.

The resident journeyman of PBC. He will at least attempt to make an Easter fight watchable.