Freddie Roach built the Wild Card Gym in Hollywood, Calif. because he never knew when the next Muhammad Ali would walk through his doors.

In 2001, a little-known Filipino named Manny Pacquiao wandered into his gym looking for guidance. Roach hardly knew of Pacquiao even though the fighter was already a world champion with a 32-2 record. He held mitts for Pacquiao that day, and immediately saw hints of something special. Eighteen years later, they’re still operating at elite levels, arguably producing one of the most storied tandems the sweet science has ever seen, right there along with Ali and his mentor Angelo Dundee.

Much like Roach once looked for the next Ali, he’s now searching for the next Pacquiao, and he believes he’s found one in Gor Yeritsyan (10-0, 9 knockouts), an undefeated, hard-hitting Armenian welterweight who arrived to America two months ago and walked straight into Wild Card looking to make the stateside leap after running through the competition in Russia.

The 24-year-old Yeritsyan met Roach as the trainer was preparing Pacquiao for what turned out to be a turn-back-the-clock performance against Keith Thurman.

Pacquiao returned to the Philippines a day after his resounding win, and shortly after, Roach discovered that he had another fighter who reminded him of the Filipino. He was studious, had fearsome power and showed unrelenting desire to put in the sweat required for reward.

It was Gor Yeritsyan.

“He just showed up to the gym one day,” Roach recalled to Boxing Scene. “Gor is a very good boxer and all-around fighter with power in both hands who throws good combinations. He reminds me of a young Manny Pacquiao. He’s been working hard since the first day I met him. I like that in fighters.”

The high praise and comparison to Pacquioa is warranted Roach said because the 147-pound Yeritsyan is “well conditioned, listens very well and has a very great work ethic.”

“They have to show me something for me to pay attention to them, that’s for sure,” said Roach. “So I started working with him right away. He’s getting better and better every day. He doesn’t take breaks. He doesn’t stop. Work. Work. Work, just like Pacquiao.”

Time was at a premium when Roach was prepping Pacquiao, yet the picky trainer still prepared Yeritsyan in the morning, teaching him better footwork and combinations, and then shifted to the Filipino Senator in the afternoon. 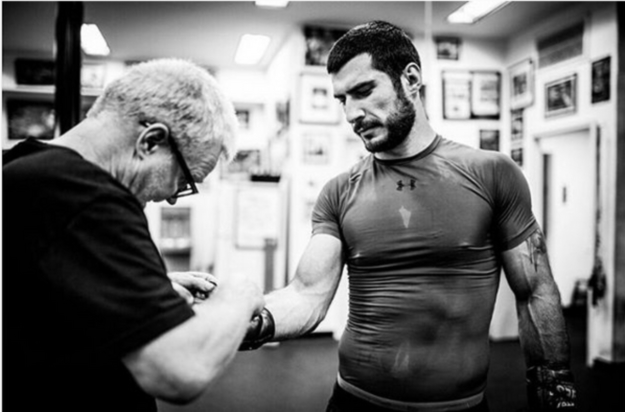 Yeritsyan, who’s last seven opponents have an average of nearly 19 wins, said his mentor Roach teaches him something new everyday that his adversaries cant.

“That is the ultimate compliment,” Yeritsyan told Boxing Scene of what Roach’s Pacquiao comparison meant to him. “I think Freddie sees my will and desire to train and to do the work required to be great. I’m always the first one in and last one out. That’s my mentality. To just push myself to the limit.”

“We understand each other well, and we respect each other. So far everything is going great. He advises me greatly during sparring and makes corrections whenever I need them. He corrects minor mistakes before it could become a bad habit. I feel I’ve improved already.”

Yeritsyan has been the beneficiary of top-notch sparring at Wild Card with the likes of Victor Ortiz, Alexander Besputin, Raul Curiel and Elvis Rodriguez. He even wanted to spar Pacquiao, but the future Hall of Famer declined because Yeritsyan was too big.

“My sparring partners are so much better here than the ones I have access to in Europe,” said Yeritsyan. “I’ve learned a lot of new things, and it’s made me a lot better in such a short time already. I like to fight smart and break down opponents with a calculated, methodical and cerebral approach. But I love mixing it up Mexican Style, too.”

Momentum is building for Yeritsyan to land a deal with a major promoter.

Yeritsyan will make his U.S. debut Friday as the main event of the Bash Boxing fight card at Burbank Marriott Convention Center in California when he takes on Derion Chapman (3-4, 2 knockouts) in a six-round fight.

Davtyan said he must run through Chapman with a spectacular performance in order to take the sizable steps everyone has in mind for him.

“A lot of people are very high on Gor’s potential,” said Davtyan. “He has a high ceiling. The next few fights will really show what kind of potential he has and the reality of achieving them. When Freddie is comparing him to Pacquiao, we want him to live up to that kind of success, yet, have his own unique, signature style. We strongly believe he can be a star. He has a very bright future.”

Yeritsyan was supposed to fight Breidis Prescott on Friday, who once knocked out fellow unbeaten Amir Khan to only now sport a 31-17 record, but that matchup against the fading veteran fell apart during the 11th hour this week. Now, Yeritsyan will be looking to get his feet wet against the unheralded Chapman.

“I want to make sure I look great in my U.S. debut and put on a knockout performance to steal the show,” said Yeritsyan. “I’m ready to fight anyone. I’m not afraid of anyone. It doesn’t make a difference if I’m the opening fight or the closing one. I just love boxing.”

Steve Bash, head of Bash Boxing and formerly a manager of Roman Karmazin, promotes pugilism with local shows in Southern California. As soon as he got word of Yeritsyan and the potential he presented, he quickly built a fight card around him.

“Gor is well determined to prove himself on the world stage,” Bash told Boxing Scene. “There are a lot of guys who have come from Armenia and Russia and have been successful. This fight will be Gor’s first test. Time will tell, and the ring will provide answers on whether he’ll keep climbing the ladder, or not.”

Back home, Yeritsyan, who is from the town Masiv in Armenia’s capital city of Yerevan, was trained by David Torosyan, head coach of the Armenian Boxing Team. He still maintains a great relationship with his coach, he said, and after his fight Friday, Yeritsyan will return home for a short retreat.

He said training in America has been tough. He lives in a hotel near Wild Card and keeps sanity by hanging with his best friend and Punch Boxing Promotions stablemate Narek Abgaryan (12-0, 5 knockouts), an Armenian bantamweight who also trains at Wild Card.

“Being around my countrymen in the gym and in a city where my culture is prominent is very important to me, and it’s helped me because I miss being home,” Yeritsyan said, noting that living in a city with a million-plus Armenians has somewhat made him feel at home.

In the past, Roach has trained Armenians like Vanes Martirosyan and Karen Harutyunyan. Currently, he’s coaching Azat Hovhannisyan and Aram Amirkhanyan.

“More so now than ever, there is talent coming in from Armenia,” said Roach.

Martirosyan, who last was in the ring with Gennadiy Golovkin, has since retired and shifted his focus to training and helping fighters at Wild Card. On Friday, Martirosyan will be working Yeritsyan’s corner and also translating Roach from English to Armenian.

Yeritsyan wants to get in the ring twice more this year after his showing Friday.

As for another ring, he will be getting engaged to his girlfriend Ellen Shahbazyan when he returns to Armenia with intentions of one day being pronounced husband and wife.

Until then, he wants to be pronounced world champion, a title Roach believes is a possibility.

“It’s probably too soon to predict if he will, but he has the potential to become a world champion,” said Roach. “I think he will have a hell of a nice, long career.”