The unbeaten welterweight from Yerevan, Armenia had little difficulty in outclassing Los Mochis, Mexico’s Mahonri Montes Thursday evening at Wild Card Boxing Club in Hollywood, California. The Freddie Roach-trained Yeritsyan was steady in his attack en route to a 6th round stoppage win in their NBC Sports Network-televised swing bout.

An accumulation of punishment prompted referee Jack Reiss to intervene at 0:18 of round six. 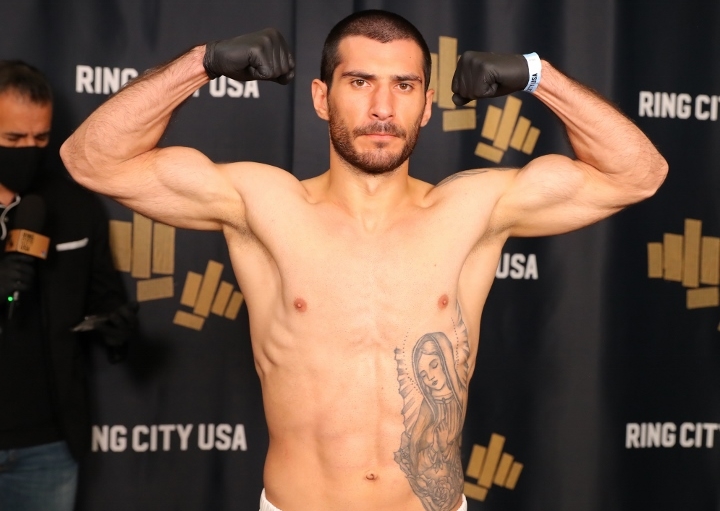 Yeritsyan looked very comfortable from the opening round, and not just because he was fighting outside of the gym where he trains daily. The undefeated prospect—who turns 26 later this month—flicked his jab while spending most of the frame with his hands down by his waist.

Montes walked forward in hopes of making it more of a fight, though paid the price when Yeritsyan was willing to oblige. Left hooks landed for the Armenian welterweight while steadily scoring with a purposeful jab.

Time was called in round four, as Montes began bleeding from his nose, chin and left earlobe. Yeritsyan continued to work on the inside, scoring with a head-snapping right hand and a crisp uppercut. Reiss had the ringside physician give Montes a long look in between rounds before himself warning the corner that he was on the verge of stopping the fight.

Yeritsyan pumped his jab throughout round five, while Montes was barely able to get off his own punches. Yeritsyan followed his jab with a right hand over the top, often catching Montes clean though unable to floor the brave Mexican slugger.

Another corner visit by Reiss came with far more emphatic instructions to turn the tide, which was met with Montes begging for one more round. In the other corner, Yeritsyan was given his marching orders by Roach to close the show.

Yeritsyan did just that.

An early flurry of punches in the opening seconds of round six was enough to convince Reiss to end the fight, allowing Montes (36-10-1, 25KOs) to live to fight another day.