Joe Goossen could’ve directed Diego Corrales to hold Jose Luis Castillo or move away from the man who had just dropped him twice within a 30-second span.

His demonstrative trainer instead instructed Corrales to attack Castillo after re-inserting his mouthpiece in the 10th round of what already had been a stunning slugfest.

“You gotta f--king get inside on him now,” Goossen famously told Corrales.

Goossen based his advice on watching a coherent Corrales calmly get off the canvas both times early in the 10th round. The late Corrales’ trainer knew he was fit to continue, too, because Corrales questioned Tony Weeks when the veteran referee understandably deducted a point from Corrales for removing his mouthpiece for the second time in the 10th round of their lightweight title fight in May 2005.

“I knew what type of shape Diego was in,” Goossen told BoxingScene.com. “And I knew Castillo really had expended himself going for that knockout. Sometimes you expend all that energy, and you don’t have much left in the gas tank. That’s why I told Diego to go ahead and do what would probably be counterintuitive if you were an impartial viewer.

“Diego responded in the corner. You see the back of his head and me looking at him, but he was looking right into my eyes when I told him that. He gave me a look of acceptance on that and right from the get-go it was like he had a shot of adrenaline, and he just started whipping punches.”

A suddenly rejuvenated Corrales incredibly did exactly what Goossen asked of him. But he didn’t just get inside on Castillo – Corrales got inside the hearts and minds of appreciative, awestruck fight fans who watched him complete perhaps the most unfathomable comeback in boxing history.

After suffering two knockdowns in the first 54 seconds of that surreal 10th round, Corrales came back to catch Castillo with a chopping right hand, wobbled him with a left hook and buckled his legs with another left hook. A flurry of answered punches, punctuated by a left hook that left a defenseless Castillo slumped against the ropes, caused Weeks to jump between them and stop an unforgettable battle that was the consensus “Fight of the Year.”

Showtime will replay the classic Corrales-Castillo fight Friday night at 10 p.m. ET/PT. The premium cable network also will air an encore of their immediate rematch, which Mexico’s Castillo won by fourth-round knockout, following the rebroadcast of their first fight. 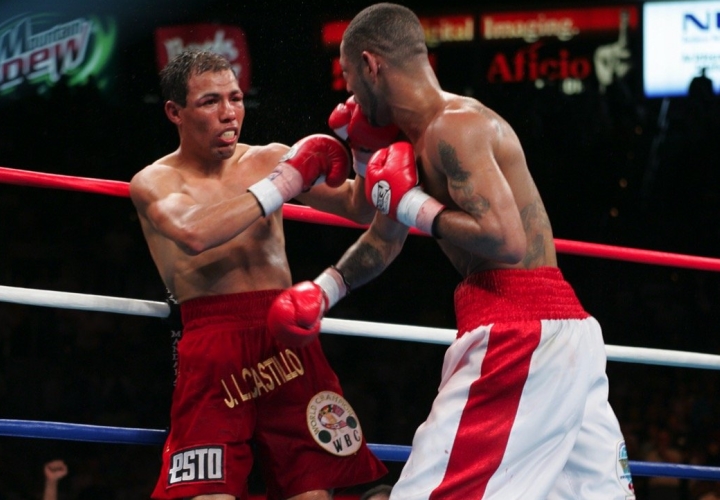 Al Bernstein, Showtime’s longtime boxing analyst, fondly recalls Corrales-Castillo as the best fight he has announced from ringside during his 40-year broadcasting career.

“I think the thing that differentiates that fight from so many others is it was fought at a very high skill level, and yet it was wildly exciting,” Bernstein told BoxingScene.com. “Using the Gatti-Ward fight as an example – it was a great fight, but it wasn’t fought at as high a skill level as this particular fight. In Corrales-Castillo, both guys were hurt at various points in the first nine rounds. This would’ve been a classic fight without the 10th round.

“But when you add the 10th round, it becomes legendary because you had that first part of the round with the two knockdowns, when Corrales looked completely spent. It didn’t look like he’d be able to make through the round. And the other thing that did was the two-knockdown round, plus the point being deducted, made that already a 10-6 round. So, at that juncture, even though it had been a very close fight to that point, winning a decision for Corrales became questionable at best, even if he got through the 10th round.”

Weeks told BoxingScene.com he never came close to stopping their brutal brawl before Corrales came back because Corrales proved that he was able to continue.

Corrales carefully waited for Weeks’ count to reach eight before he got up from the first knockdown 25 seconds into the 10th round. Following the second knockdown, a cautious Corrales didn’t get up until Weeks counted to nine.

“What I remember from that fight is round after round, it was the same action,” Weeks said. “Back and forth, back and forth, both fighters taking an equal amount of punishment and dishing it out. Tremendous power, tremendous accuracy. They both went to war, toe-to-toe, and were willing to pay the price.

“That fight will be with me for the rest of my life. Occasionally, I go back and look at it. Not only what I did in it, but what the two fighters did in that fight. It’s an inspiration.”

Corrales’ courage has been applauded in the nearly 15 years that have passed since he won their epic encounter at Mandalay Bay Events Center in Las Vegas. Goossen points out, though, that Corrales wouldn’t have withstood almost 10 rough rounds of sustained savagery had he not been in superior shape for what they knew would be a grueling fight contested almost entirely on the inside.

“You can’t have a 10-round fight with that many punches thrown,” Goossen said, “with that many punches landed, with that type of non-stop action for three minutes, 10 rounds straight, then get hit with two big shots that would normally knock guys out, and be able to get up from them, that doesn’t just happen because you’ve got heart. Yeah, OK, you’ve gotta have heart, too.

“But that happened because the first order of the day was you’ve gotta have conditioning. He was conditioned to the point where his heart got bigger, his chin got stronger and his determination was at another level. When you’re in that type of shape and you have that type of talent, when those two factors come together, this is what happens. You have one of the fights of the century, and that’s exactly what it was.”

Corrales was just 29 when he died in a motorcycle accident in Las Vegas on the two-year anniversary of his war with Castillo. A decade-and-a-half later, Goossen still hasn’t seen anything quite like it.

“I believed in Diego,” Goossen said. “He was something very special. And that dramatic turnaround was about as exciting as anything I’ve ever been involved in. I’ve been involved in a lot of shootouts, but this one was the most dramatic because of the Hollywood ending. That’s something you wouldn’t even write in Hollywood. It wouldn’t be believable. You’d have to do something else.”

[I]”But that happened because the first order of the day was you’ve gotta have conditioning. He was conditioned to the point where his heart got bigger, his chin got stronger and his determination was at another level.”[/I] Love to hear…

[QUOTE=KingKrypton;20507696]"You got to ****ing get inside on him now."[/QUOTE] I love how his trainer gives him no chance for self-pity, just sound instruction.

The 10th rd brings tears to my eyes.